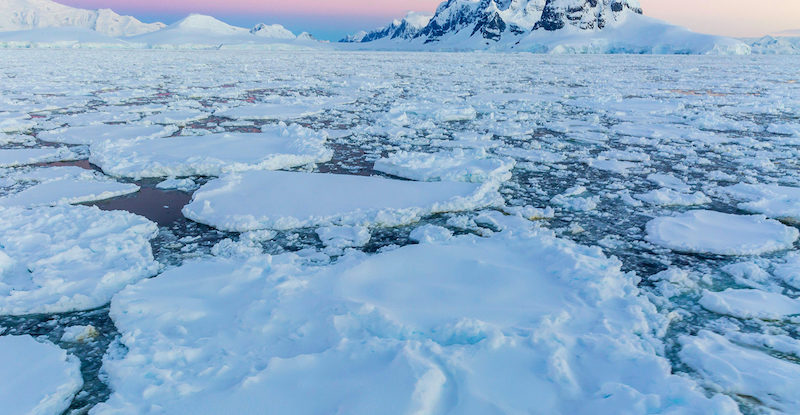 You might, or perhaps might not have seen some of the stories regarding the sudden drop in the amount of Antarctic sea ice. As an example, the UK’s Guardian reports on 2nd July 2019 …

Plunge is far faster than in Arctic and may lead to more global heating, say scientists.

The vast expanse of sea ice around Antarctica has suffered a “precipitous” fall since 2014, satellite data shows, and fell at a faster rate than seen in the Arctic.

The plunge in the average annual extent means Antarctica lost as much sea ice in four years as the Arctic lost in 34 years. The cause of the sharp Antarctic losses is as yet unknown and only time will tell whether the ice recovers or continues to decline.

But researchers said it showed ice could disappear much more rapidly than previously thought. Unlike the melting of ice sheets on land, sea ice melting does not raise sea level. But losing bright white sea ice means the sun’s heat is instead absorbed by dark ocean waters, leading to a vicious circle of heating.

Where exactly is this insight coming from?

The ultimate alpha source is the publication of a new study within the peer-review journal PNAS (Proceedings of the National Academy of Sciences) on 1st July 2019.

What is the Study all about?

It consists of a complete record of satellite observations made over the last 40 years that has been used to quantify changes in Antarctic sea ice coverage since the late 1970s.

What this now reveals is that a gradual, decades-long overall increase in Antarctic sea ice extents reversed in 2014, with subsequent rates of decrease in 2014–2017 far exceeding the more widely publicised decay rates experienced in the Arctic. The rapid decreases reduced the Antarctic sea ice extents to their lowest values in the 40-y record, both on a yearly average basis (record low in 2017) and on a monthly basis (record low in February 2017).

Basically this has happened

Below we have a set of graphs showing you the measurements made by the passive-microwave data from the NASA Nimbus 7 and Department of Defense DMSP satellites.

What you can see within A are the monthly average sea ice extents for the Southern Hemisphere, January 1979–December 2018.

(B) illustrates monthly deviations determined from the monthly average data of A, with the same monthly color coding and with the line of linear least squares fit and its slope and SD.

But what does this mean for us?

Sea ice spreads over vast areas and has major impacts on the rest of the climate system. When it is there it is reflecting solar radiation and restricting ocean/atmosphere exchanges. When it decreases then the darker ocean absorbs the energy. That has huge implications for the global climate.

The ongoing decline in the Arctic is well-known. Since the late 1990s, it has been clear that the Arctic sea ice cover has been decreasing in extent over the course of the multichannel passive-microwave satellite record begun in late 1978. The decreases have accelerated since the 1990s and have been part of a consistent suite of changes in the Arctic, including rising atmospheric temperatures, melting land ice, thawing permafrost, longer growing seasons, increased coastal erosion, and warming oceans.

The Antarctic situation has been quite different, with sea ice extent increasing overall for much of the period since 1978. While various suggestions have been made to explain this gradual increase, no consensus has emerged. However, while struggling to understand that, the Antarctic sea ice extent has taken a dramatic turn from relatively gradual increases to rapid decreases. On a yearly average basis, the peak sea ice extent since 1978 came in 2014. Since then, the decreases have been so great that the yearly averages for 2017 and 2018 are the lowest in the entire 1979–2018 record, essentially wiping out the 35 y of overall ice extent increases in just a few years.

The purpose of the published paper

The objective of the published paper is to put the observed 40 years satellite data into the public domain.

The author expresses this thought at the end …

I hope that the 40-y record discussed in this paper will encourage further studies into the atmospheric and oceanic conditions that could have led to the extremely rapid 2014–2017 decline of the Antarctic sea ice cover, the comparably rapid decline in the mid-1970s, and the uneven but overall gradual increases in Antarctic sea ice coverage in the intervening decades. More broadly, the environmental datasets may be nearing the point where they are long enough and rich enough to enable the linking of several of the modes and dipoles and oscillations now spoken of separately, just as the El Niño and Southern Oscillation phenomena were linked together years ago as ENSO; once that further linkage happens, the understanding of Earth’s very interconnected climate system, including the sea ice cover, could be markedly enhanced.

“Climate change is affecting the winds, but so is the ozone hole and short-term cycles like El Niño. The sea ice is also affected by meltwater running off from the Antarctic ice sheet,” she said. “Until 2014, the total effect of all these factors was for Antarctic sea ice to expand. But in 2014, something flipped, and the sea ice has since declined dramatically. Now scientists are trying to figure out exactly why this happened.”

Prof Andrew Shepherd at Leeds University in the UK …

“The rapid decline has caught us by surprise and changes the picture completely. Now sea ice is retreating in both hemispheres and that presents a challenge because it could mean further warming.”