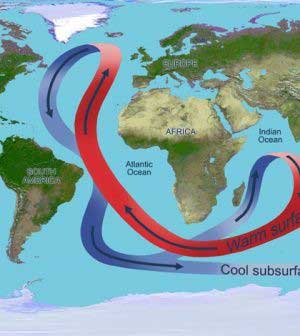 The plot of the 2004 movie, The Day After Tomorrow, is that the Atlantic Ocean Circulation which carries warm water North suddenly stops and plunges the entire Northern Hemisphere into an Ice Age almost overnight… er yes, well it’s just a movie. What is actually going on with the Atlantic circulation is a concern, and has been a topic of active research. That however is a voyage of discovery about what is really happening. Two recent papers have highlighted that it has slowed down by 15% and that it is now slower than at any time during the past 1,500 years.

A new paper has just been published within Nature that adds to the ongoing conversation. It suggests two things …

I’m not convinced that either of these ideas are actually correct, and I’m not alone in that. Some leading climate scientists are also rather skeptical about this paper.

First, let’s outline some of the details. Then we can move on to layout out the concerns with it.

Evidence from palaeoclimatology suggests that abrupt Northern Hemisphere cold events are linked to a weakening of the Atlantic Meridional Overturning Circulation (AMOC). The thinking is that this happens when melting freshwater from ice floods into the oceans and disrupts the existing circulation system.

I was writing about this very scenario being an explanation for the Younger Dryas, a period when the climate in the Northern Hemisphere suddenly shifted into a cold phase 11,500 years ago for a period of time. Well yes, the plot of that movie might be popping back into your head. No it was not literally overnight, but it was a rapid shift.

It has been generally understood that slower disrupted AMOC leads to a colder climate in the northern hemisphere, not a warmer one, hence what this new paper claims conflicts with that understanding.

What this paper suggests that the AMOC has a natural cycle where it goes through periods of weakening and then strengthening, and that the 15% weakening that we are observing now is completely explained by that cycle.

Idea 2: The AMOC Transports heat into the deep ocean

What the authors also propose is that the AMOC acts as a Global Warming buffer that transports heat down into the deeper Atlantic and so prevents that heat from warming the surface. As the AMOC went though its cycle and was speeding up from the mid-1990s to the early 2000s, it stored about half of the excess heat in the deep ocean (or so they claim). This helped to slowdown the impact of global-warming. Now that it is going back into a slowdown, the deep oceanic heat uptake has weakened and so we get more of that heat.

What they anticipate is an AMOC minimum phase (if one past pattern they claim to identify repeats) will be about 20 years long. The supposed net effect is that the heat that was being transported into the deep Ocean has to go somewhere – to put that another way they think we will see rapid global surface warming because the AMOC is in a slow phase.

Here is an Illustration

There is also a Press Release

Via a press release we have comments from the Study Authors …

“Climate scientists have expected the Atlantic overturning circulation to decline long-term under global warming, but we only have direct measurements of its strength since April 2004. And the decline measured since then is 10 times larger than expected,”

“Many have focused on the fact that it’s declining very rapidly, and that if the trend continues it will go past a tipping point, bringing a catastrophe such as an ice age. It turns out that none of that is going to happen in the near future. The fast response may instead be part of a natural cycle and there are signs that the decline is already ending.”

“The global climate models can project what’s going to happen long-term if carbon dioxide increases by a certain amount, but they currently lack the capability to predict surface warming in the next few decades, which requires a knowledge of how much the excess heat trapped by greenhouse gases is being absorbed by the oceans,”

A slower AMOC should lead to more warmth in the deep ocean not less. Previous research has established this …

If the rate of thermohaline overturning slows down, then heat diffusion gains the upper hand and the deep ocean warms. If it speeds up, the opposite happens and the deep ocean cools. Model simulations show that this is true for decadal variability (e.g. Knight et al. 2005) as well during global warming (e.g. Liu et al. 2017). Knight et al. found that decadal variability of the AMOC can cause  small variations in global mean surface temperature, with a strong AMOC linked to high global surface temperatures. Liu et al. found that their climate model warms less under the same greenhouse gas scenario when the AMOC is weakened more.

This paper claims the opposite, yet does not offer evidence that is sufficiently robust enough to act as a rebuttal to our current understanding.

The paper leans heavily upon the idea that from about 1998 Global Warming slowed down, and then attempts’ to correlate that with a faster AMOC phase. The rather fundamental flaw is that the supposed slowdown after 1998 is not real, it never actually happened …

the supposed “warming slowdown” after 1998 is known to be largely an artifact of the HadCRUT temperature data, because these do not cover the Arctic which has warmed the most in this period. Other data – HadCRUT with infilled Arctic temperatures (Cowtan and Way), GISTEMP, NOAA, Berkeley – do not show this. (Guess which global temperature data set Chen and Tung exclusively used.)

Does a Stronger AMOC transport heat down into the deep ocean?

But that’s not how it works at all. Warm salty water flows north. It then cools in the Arctic and because it cools, it then sinks because it is denser than the Arctic water that is less salty due to ice melt. That’s not a heat transport mechanism, it will carry cold down, not heat. Subject Matter Experts with decades of solid observational experience simply don’t see heat transfer happening …

Realclimate asked veteran sea-going oceanographer Igor Yashayaev of the Bedford Institute of Oceanography in Canada, who has decades of experience studying convection in the subpolar Atlantic, whether there is any evidence for salinity-driven convection there which could carry heat downward? Yashayaev’s reply:

“In the polar and subpolar regions, under no circumstances we saw convection bringing warmer water down deep.”

Are there any models that demonstrate that this heat transport mechanism can work?

Is the AMOC slowing natural or global warming?

“Our results, based on several independent indices, show that AMOC changes since the 1940s are best explained by multidecadal variability, rather than an anthropogenically forced trend.”

In reality it is not a binary choice. The truth, as accepted by the vast majority of subject matter experts, is that it is a mixture of both.

Will the AMOC now remain in a slow phase for the next two decades?

They claim it will because of one previous minimum did that. But they have simply not made their case for that …

Neither Caesar’s AMOC index starting in 1870 nor the long proxy-based AMOC time series we presented in Rahmstorf et al. (2015) nor model simulations support the idea of such regularly repeating AMOC cycles. In addition there is forcing, e.g. from the increasing meltwater from Greenland, which will affect the future AMOC. And as discussed above, the idea that a weak AMOC promotes rapid global warming is in itself not supported by any convincing evidence.

Publication of a study within a highly reputable journal such as Nature is how an author, or team of authors, have a conversation with their peers in the wider community. Once published, the reception can range from general acceptance because the data backing up the conclusions is both clear and also robust, all the way through to rejection because the data is simply not robust enough, or the data has not been interpreted correctly, or perhaps the data is simply incomplete. This paper falls into the latter end of that spectrum.

Cherry picking just one paper is never enough, no matter how reputable the journal happens to be. It needs to be understood within the context of the wider ongoing conversation. Unfortunately, sometimes some parts of the media can latch on to one paper and then run a story with the conclusions presented as scientific “truth”. When it later becomes clear that things are not as presented to the public, then it can impact the public perception of the reliability of the scientific process

This can muddy the waters of public perception. In the context of the AMOC and Global Warming, let’s answer the question that the subject line posed with one quote …

rapid global warming will continue until we strongly reduce greenhouse gas emissions – but for reasons that have nothing to with the AMOC.

Does a slow AMOC increase the rate of global warming? … by Stefan Rahmstorf and Michael Mann