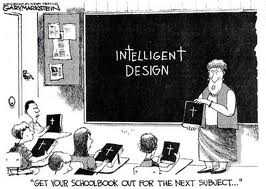 If, like me, you engage in on-line discussions with theist crazies, then you will know that at some point Evolution will pop up. It is usually unexpected (but not always), for example yesterday when engaged in a debate with an Islamic fanatic about the existence of God (which is usually a claim that is some variation of one of the three famous arguments, the Cosmological, the Teleological, or the Ontological) we suddenly take a left-hand turn and Darwin pops up which then leaves all the non-believers thinking, “WTF, where did that come from?“, and soon we were buried in heaps of anti-evolution quotes.

These click-heads (folks who cut-and-paste from websites run by kooks), can indeed be rather verbose, so it is well worth understanding the following (Oh and yes you are right, that term should really be spelt using a ‘D’) …

Tip: When you ask the crazies to provide evidence, you will often, in reply, be given a list of stuff that is not in any way credible, so it is always wise to qualify such requests for evidence with the observation that a book (anybody can write anything, it proves nothing), a YouTube video, a site run by an Internet kook who has no qualifications, or lists of quotes taken out of context, do not qualify as ‘evidence’, only a scientific paper published in credible peer-reviewed science journal does.

This of course is a personal decision, so the primary thing to be aware of is that you will never win. You are not dealing with folks who, when presented with reason and logic, will change their mind, they have a ‘belief’, so cognitive dissonance will kick in strongly. However, what is generally true is that there is usually a large group of lurkers who are on the fence listening in. These are the folks whom you will persuade.

You might also choose to debate for a completely different reason; perhaps simply to practice your critical thinking skills, or to utilize the debate as an opportunity to expand your own knowledge as you seek out answers.

Tip: first one to lose their cool and revert to ad hominems has lost, so even if your opponent is indeed a clueless gobshite (they usually are), don’t go there. Instead deliver their ass to them on a plate by slicing and dicing their silly claim, and perhaps also deploy a bit of satire and humor as a means of mocking them. They will hate you for it, but the audience will love it and applaud.

What Cool-Aid fountains do the Crazies drink?

Well, it very much depends upon the theist belief system. Both Christians (and some Muslims), cut-and-paste from the Discovery Institute, and Muslims tend to stick with just Harun Yahya (the Turkish loon).

Tip: If you do encounter a Muslim quoting Christian creationist materials, do remember to congratulate them for renouncing Islam and embracing Christianity – it drives them nuts.

Tip: If you find yourself faced with a very long bit of waffle nonsense, just paste the first sentence into Google and you can then quickly identify the poisoned chalice they have supped from. This then allows you to point out that the long rant is not theirs, and by cutting and pasting without citing the source or the actual author they have most probably breached the copyright terms of their source.

OK, lets take a quick pass at the top two I mentioned

There are specific patterns of behaviour that you will come across time and time again. Here are some examples of what to expect:

Quote Mining: It is very common to be given a list of quotes from supposed reliable sources that claim to highlight issues with evolution. What is actually going on is that these are usually crafted and mined out of context in a manner that modifies what was actually written. At one point I took such a list and went through each quote putting it back into context to illustrate what it actually said. I blogged the details of all that here. You can find out lots more here in the Talk Origins quote mine, and also search there to find de-bunking for most quotes like this.

Lies and Deceit: Outright deception (and to be fair it is quite often self-deception), they make claims that are simply not factual. A good example is the list of Peer-Reviewed work that the Discovery Institute lists. Examine it carefully and you quickly discover it is not what it claims to be. Filter out all the clutter (books, magazine articles etc…) and you boil that down to a list of 12. Then examine each of those in turn and you quickly discover that none of them are credible, so their entire list of supposed peer-reviewed scientific articles is actually zero. I blogged an examination of each here.

The first obvious observation is that I’d recommend you get to know your topic. You will of course do exactly that as you debate on-line and go seek out the factual answers, but please don’t be foolish enough to start with a blank sheet. A great way to prepare is to read up a little, I’d recommend “Why Evolution is True” by Biologist Prof Jerry Coyne , (its not expensive, so go order a copy now). There are tons of other great books as well. Another to consider is “The Greatest Show on Earth” by Prof Richard Dawkins. Got any more great recommendations? – Them drop a comment.

Put your finger on the pulse. For example, Jerry Coyne has a fantastic blog, “Why Evolution is True“, so why not add that into your RSS feed.

There are other very rich resources out there as well. One of the best is Talk.Origins where you will find  mainstream scientific responses to the assertions of those advocating intelligent design or other creationist pseudosciences. The index here gives you an idea of just how rich and deep a source this is.

There are also plenty of other great sources out there as well. For example, the Science-Based Life blog, had a fantastic article a couple of days ago about Understanding Evolution: 17 Misconceptions and Their Responses (Go check it out, it’s a really nice clear article, I do like it).

How should you respond to creationist claims, should you respect it, or respect the authors behind this nonsense? Nope, it is not science. When looked at, all you will find are incandescent vapors and reflective materials (“Smoke And Mirrors”). Anybody not familiar with the conversation will be easily fooled and that’s the problem we face. There are many who do honestly believe in Creationism because they have been presented with a lot of apparent proof that discredits well-established scientific facts. Tragically, these are the victims, and have been deceived by this con job. But those who orchestrated this, and have repeatedly had their creationist propaganda debunked, yet still persist in their devotion to distorting the truth, truly are clueless gobshites and deserve the full onslaught of ridicule.

Ridicule is the only weapon which can be used against unintelligible propositions. –Thomas Jefferson


Got any more hints, tips, guidance or pointers to other books, blogs or websites?  If so, then why not drop a comment for others to read

3 thoughts on “Debating Evolution with the crazies – Hints and Tips”