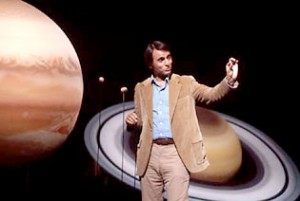 Do you remember Cal Sagan on Cosmos? Well, plans are afoot to bring it back in 2013. Sadly Carl is no longer with us, so it will be Neil deGrasse Tyson leading the charge. He is truly a great choice to do this. At one point Sagan himself went out of his way to recruit Tyson. During an interview with writer Daniel Simone (in the November 2, 2007 issue of Dan’s Paper here) Tyson said,

“Interestingly, when I applied to Cornell, my application dripped of my passion for the study and research of the Universe. Somehow the admissions office brought my application to the attention of the late Dr. Sagan, and he actually took the initiative and care to contact me. He was very inspirational and a most powerful influence. Dr. Sagan was as great as the universe, an effective mentor.” 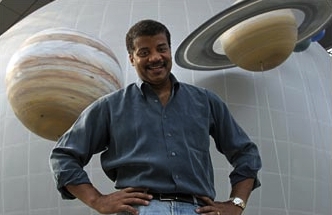 I had the privilege of listening to Tyson speak at TAM9 a couple of weeks ago, this is indeed a man with a deep passion and a highly contagious enthusiasm. Carl Sagan’s original series Cosmos, which was first broadcast in 1980, remains the most successful American public television series of all time and has been seen by an estimated 700 million viewers around the world. If anybody could possibly fill those shoes, then Tyson is indeed the man to do it, I cannot think of a better choice for such a role.

Sadly their is one huge downside to all this, we all have to wait until 2013 to watch the new series.

According to the producers, the new series will tell

“the story of how human beings began to comprehend the laws of nature and find our place in space and time. It will take viewers to other worlds and travel across the universe for a vision of the cosmos on the grandest scale. The most profound scientific concepts will be presented with stunning clarity, uniting skepticism and wonder, and weaving rigorous science with the emotional and spiritual into a transcendent experience.”

Tyson himself is not just passionate, but is also well qualified. His research has focused on observations in stellar formation and evolution as well as cosmology and galactic astronomy. He has held numerous positions at institutions including University of Maryland, Princeton University, the American Museum of Natural History and Hayden Planetarium.

Tyson has also written a number of popular books on astronomy. In 1995, he began to write the “Universe” column for Natural History magazine. In a column for the magazine he authored in 2002, Tyson coined the term “Manhattanhenge” to describe the two days annually on which the evening sun aligns with the cross streets of the street grid in Manhattan, making the sunset visible along unobstructed side streets.

In 2004, he hosted the four-part “Origins” miniseries of PBS’s Nova, and co-authored with Donald Goldsmith the companion volume for this series, Origins: Fourteen Billion Years Of Cosmic Evolution. He again collaborated with Goldsmith as the narrator on the documentary 400 Years of the Telescope which premiered on PBS in April 2009.

Sigh … OK, lets grab the nettle and say it … Pluto? – come on folks, get over it. Yes, as director of the Hayden Planetarium, Tyson bucked traditional thinking to keep Pluto from being referred to as the ninth planet in exhibits at the center. Tyson has explained that he wanted to look at commonalities between objects, grouping the terrestrial planets together, the gas giants together, and Pluto with like objects and to get away from simply counting the planets. He has stated on The Colbert Report, The Daily Show, and BBC Horizon that this decision has resulted in large amounts of hate mail, much of it from children. In 2006, the I.A.U. confirmed this assessment by changing Pluto to the “dwarf planet” classification.

As for the new series, I am confident it will truly rock, I’m really looking forward to it.

5 thoughts on “Cosmos is coming back”