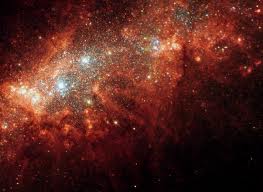 A rather common argument that often gets presented for a God claim is to simply point at the world, then claim that it quite obviously could not have just happened so obviously god is real. Here is an Islamic variation for you …

if you look at the orderliness and the interdependence of all living and non-living things, how can you not realise that this can not have happened randomly.

OK, that is actually a paraphrase, the original text by some Turkish Sufi (Islamic mystic) reads …

If you are curious about a precise translation, well google translate is your friend.

It is of course an appeal to ignorance, my title strips away the babble and decomposes it back to the basic nuts and bolts … “Gosh, I have no clue how X could have possible happened naturally, so obviously it must have been magic“.  In this case X is an observation regarding the apparent patterns and orderliness of life or the universe.

The above argument was in fact presented by a Muslim who is well educated and believes in evolution, but then asserts that evolution is perhaps how Allah did it, and appears to at times rather bizarrely claim that evolution explains variation within one species, but that the jump from one species to another is something that Allah does.

Life is the way it is due to evolution (variation and natural selection), and beautifully explains all of it, not just little bits. The natural emergence of complexity, all the species that we observe in the world, requires no additional bits of magic. It might indeed be tempting for cultural reasons to point at the dependencies that different species have on each other and make a “it was clearly designed to work that way” claim, but the truth is that there is no need to revert to magical thinking to explain any of that, but then this is perhaps why many religious people opt to reject evolution or perhaps accepts bits, it undermines their belief in magic as the cause.  Some might object to my use of the term “magic” but that is the raw essence of the religious claim.

There are clearly things we once did not know, but we now do know and understand, and guess what … no magic needed, no “God did it” answer has ever turned out to be correct. Weather, the motions of the stars in the sky, lightening, were all once deeply mysterious things, and as our ancestors attempted to comprehend, they attributed all of these to magical gods, but we have moved on and now we do understand much more. There are however still many things we have yet to truly comprehend.

The truth is that there are only two viable answers to everything, not three…

The third answer, “Magic” is quite obviously not the right answer, it never can be, because it is not founded upon reason or evidence. It prevails perhaps because it worked as an answer for our ancestors and helped them to get to grips with the world around them, but no longer, it is time to put the toys of our childhood down and move on to discover the things that are really true.

I can live with doubt, and uncertainty, and not knowing. I think it’s much more interesting to live not knowing than to have answers which might be wrong. I have approximate answers, and possible beliefs, and different degrees of certainty about different things, but I’m not absolutely sure of anything, and in many things I don’t know anything about, such as whether it means anything to ask why we’re here, and what the question might mean. I might think about a little, but if I can’t figure it out, then I go to something else. But I don’t have to know an answer. I don’t feel frightened by not knowing things, by being lost in a mysterious universe without having any purpose, which is the way it really is, as far as I can tell, possibly. It doesn’t frighten me.