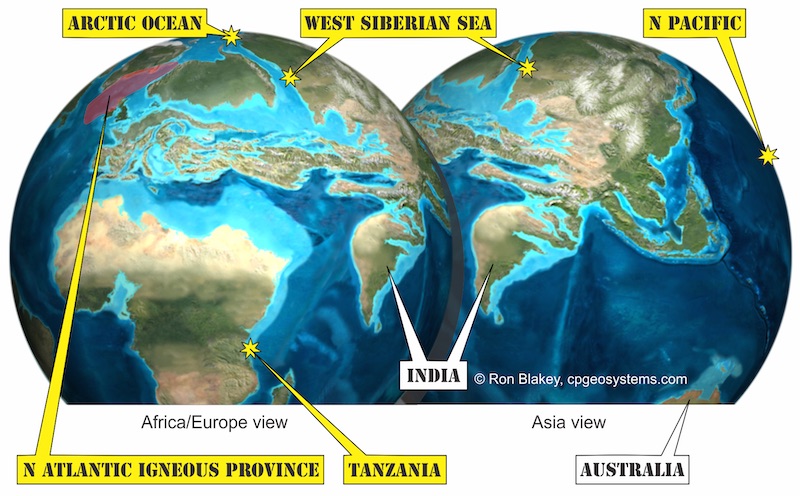 The oft quoted quip that gets trotted out on a regular basis by some of those that reject the concept of human caused climate change is that a long time ago the climate was once a lot warmer in the Arctic and that in that distant past there were Crocodiles and Palm trees there.

Is that true, was the Arctic once lot warmer?

Yes, it is true. About 56 million years ago there was the Palaeocene-Eocene Thermal Maximum (PETM). The Wikipedia page that discusses it lays out the details …

The associated period of massive carbon injection into the atmosphere has been estimated to have lasted no longer than 20,000 years. The entire warm period lasted for about 200,000 years. Global temperatures increased by 5–8 °C.[3] The carbon dioxide was likely released in two pulses, the first lasting less than 2,000 years. Such a repeated carbon release is in line with current global warming.[2] A main difference is that during the Paleocene–Eocene Thermal Maximum, the planet was essentially ice-free.[4] However, the amount of released carbon, according to a recent study, suggests a modest 0.2 gigatonnes per year (at peaks 0.58 gigatonnes); humans today add about 10 gigatonnes per year.[5][6]

Of special note is that the PETM event was caused by a massive injection of CO2 into the atmosphere.

We are not doing the same, our rate of CO2 emissions far exceed this

The PETM event is not a rebuttal to the Climate Change argument, but is instead confirmation of it. It should scare us, because what we are doing has happened before. This time the emissions are human activities, and our rate of CO2 emissions is far greater.

Associated with the PETM event is a record of mass-extinction.

There is a new Study

Titled “Temporal Scaling of Carbon Emission and Accumulation Rates: Modern Anthropogenic Emissions Compared to Estimates of PETM‐Onset Accumulation“, and published 30th January 2019 in Paleoceanography and Paleoclimatology, it compares the PETM event with our current rate of CO2 emissions …

The Paleocene‐Eocene thermal maximum (PETM) is a global greenhouse warming event that happened 56 million years ago, causing extinction in the world’s oceans and accelerated evolution on the continents. It was caused by release of carbon dioxide and other greenhouse gases to the atmosphere. When we compare the rate of release of greenhouse gases today to the rate of accumulation during the PETM we must compare the rates on a common time scale. Projection of modern rates to a PETM time scale is tightly constrained and shows that we are now emitting carbon some 9‐10 times faster than during the PETM. If the present trend of increasing carbon emissions continues, we may see PETM‐magnitude extinction and accelerated evolution in as few as 140 years or about five human generations.

Philip Gingerich, a paleoclimate researcher at the University of Michigan and author of the new study …

“You and I won’t be here in 2159, but that’s only about four generations away, When you start to think about your children and your grandchildren, and your great-grandchildren, you’re about there.”

“To me, it really brought home how rapidly and how great the consequences are of the carbon we’re producing as a people,”

A second PETM-scale global greenhouse warming event is on the horizon if we do not lower anthropogenic carbon emission rates.