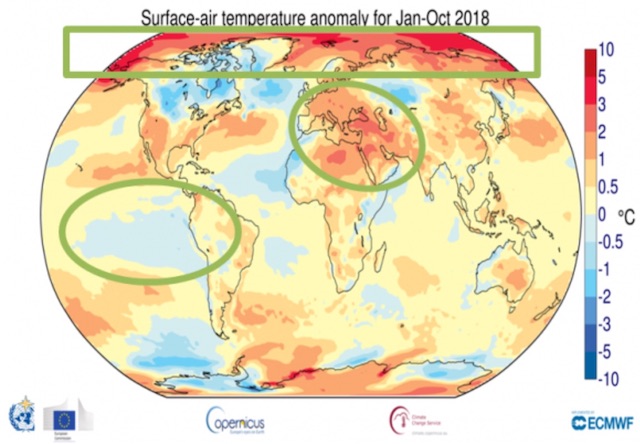 As part of the buildup to the start of the UNFCC conference in Katowice, Poland tomorrow (2nd Dec 2018), various interested parties have been publishing statements and reports that feed the very best and latest evidence-based observational data into the process of understanding the #climate. As part of that pattern, the World Meteorological Organisation has issued a report that highlights where 2018 now stands in the context of the ongoing warming trend when compared to other years.

The State of the Global Climate in 2018

To place this in context, this is the World Meteorological Organization (WMO) telling you this. They don’t have a political agenda. The foundation for this position is data that has been sourced from a large and diverse number of National Meteorological and Hydrological Services (NMHSs) and associated institutions, as well as Regional Climate Centres, the World Climate Research Programme (WCRP), the Global Atmosphere Watch (GAW) and Global Cryosphere Watch.

“We are not on track to meet climate change targets and rein in temperature increases,” said WMO Secretary-General Petteri Taalas. “Greenhouse gas concentrations are once again at record levels and if the current trend continues we may see temperature increases 3-5°C by the end of the century. If we exploit all known fossil fuel resources, the temperature rise will be considerably higher,” he said.

“It is worth repeating once again that we are the first generation to fully understand climate change and the last generation to be able to do something about it,” said Mr Taalas.

The WMO are not a lone isolated voice, the recently published IPCC 1.5 special report was telling you exactly the same.

The Intergovernmental Panel on Climate Change (IPCC) special report on Global Warming of 1.5°C reported that the average global temperature for the decade 2006-2015 was 0.86°C above the pre-industrial baseline. The average increase above the same baseline for the most recent decade 2009-2018 was about 0.93°C and for the past five years, 2014-2018, was 1.04°C above the pre-industrial baseline.

This latest WMO report adds to the body of evidence that we must make unprecedented changes in our lifestyle, energy and transport systems if we wish to avoid the consequences.

Temperatures: 2018 started with a weak La Niña event, which continued until March. By October, however, sea-surface temperatures in the eastern Tropical Pacific were showing signs of a return to El Niño conditions, although the atmosphere as yet shows little response. If El Niño develops, 2019 is likely to be warmer than 2018.

Greenhouse gases:  In 2017, carbon dioxide, methane and nitrous oxide concentrations reached new highs, according to WMO Greenhouse Gas Bulletin. Data from a number of locations, including Mauna Loa (Hawaii) and Cape Grim (Tasmania) indicate that they continued to increase in 2018.

Oceans: The oceans absorb more than 90% of the energy trapped by greenhouse gases and 25% of anthropogenic CO2 emissions, making them warmer and more acidic. For each 3-month period until September 2018, ocean heat content was the highest or second highest on record. Global Mean Sea Level from January to July 2018 was around 2 to 3 mm higher than the same period in 2017.

Sea ice: Arctic sea-ice extent was well below average throughout 2018 with record-low levels in the first two months of the year. The annual maximum occurred in mid-March and was the third lowest on record. The minimum extent in September was the 6th smallest on record, meaning that all 12 smallest September extents have been in the past 12 years. Antarctic sea-ice extent was also well below average throughout 2018. The annual minimum extent occurred in late February and was ranked as one of the two lowest extents.

State of the Climate in 2018 – Extreme Weather

Tropical Storms:  The number of tropical cyclones was above average in all four Northern Hemisphere basins, with 70 reported by 20 November, compared to the long-term average of 53, leading to many casualties. The Northeast Pacific basin was especially active, with an Accumulated Cyclone Energy that was the highest since reliable satellite records began.

Two of the strongest tropical cyclones were Mangkhut, which impacted the Philippines, Hong Kong SAR and China, and Yutu, which brought devastation in the Mariana Islands. Jebi was the strongest typhoon to hit Japan since 1993, Son-Tinh caused flooding in Viet Nam and Laos, whilst Soulik contributed to flooding on the Korean peninsula. Hurricanes Florence and Michael were associated with huge economic damage and considerable loss of life in the United States. Gita, in the South Pacific, was the most intense and most expensive cyclone to ever hit Tonga.

Floods and rainfall: In August, the southwest Indian state of Kerala suffered the worst flooding since the 1920s, displacing more than 1.4 million people from their homes and affecting more than 5.4 million. Large parts of western Japan experienced destructive flooding in late June and early July, killing at least 230 people and destroying thousands of homes. Flooding affected many parts of east Africa in March and April. This included Kenya and Somalia, which had previously been suffering from severe drought, as well as Ethiopia and northern and central Tanzania.  An intense low-pressure system in the Mediterranean Sea in late October brought flooding, high winds and loss of life.

Heatwaves and drought: Large parts of Europe experienced exceptional heat and drought through the late spring and summer of 2018, leading to wildfires in Scandinavia. In July and August, there were numerous record high temperatures north of the Arctic Circle, and record long runs of warm temperatures., including 25 consecutive days above 25 °C in Helsinki (Finland). Parts of Germany had a long spell of days above 30°C, whilst a heatwave in France was associated with a number of deaths.  It was also an exceptionally warm and dry period in the United Kingdom and Ireland. A short but intense heatwave affected Spain and Portugal in early August.

Eastern Australia experienced significant drought during 2018, especially New South Wales and southern Queensland, with much of the region receiving less than half its average rainfall for the period from January to September.  Severe drought affected Uruguay, and northern and central Argentina, in late 2017 and early 2018, leading to heavy agricultural losses.

Both Japan and the Republic of Korea saw new national heat records (41.1 °C and 41.0°C respectively.)

Oman reported one of the highest known minimum overnight temperature of 42.6 °C in June. Algeria saw a new national of 51.3 °C in July.

Cold and snow: One of the most significant cold outbreaks of recent years affected Europe in late February and early March.

Wildfires: Major wildfires affected Athens (Greece) on 23 July, with many fatalities. British Columbia in Canada broke its record for the most area burned in a fire season for the second successive year. California suffered devastating wildfires, with November’s Camp Fire being the deadliest fire in over a century for the U.S.A.

State of the Climate in 2018 – Human Impacts

Food Production: Exposure of agriculture sectors to climate extremes is threatening to reverse gains made in ending malnutrition. New evidence shows a rise in world hunger after a prolonged decline. In 2017, the number of undernourished people was estimated to have increased to 821 million, according The State of Food Security and Nutrition in the World 2018, by to FAO, WFP, the International Fund for Agricultural Development, the UN Children’s Fund and the World Health Organization. Africa is the region where climate events had the biggest impact on acute food insecurity and malnutrition in 2017, affecting 59 million people in 24 countries and requiring urgent humanitarian action. Much of the vulnerability to climate variability is associated with the dryland farming and pastoral rangeland systems supporting 70–80% of the continent’s rural population.

Climate Migrants: Out of the 17.7 million Internally Displaced Persons tracked by the IOM, 2.3 million people were displaced due to disasters linked to weather and climate events as of September 2018. In Somalia, some 642 000 new internal displacements were recorded between January and July 2018 by UNHCR, with flooding the primary reason for displacement (43%), followed by drought (29%), and conflict (26%).

Doing nothing is not an option. Not taking meaningful decisive action will see the consequences of warming continue to unfold.

Global average temperature is nearly 1°C higher than pre-industrial era (1850-1900). We are not on track for the #ParisAgreement target of keeping temperature increase to as close as possible to 1.5°C. Every fraction of a degree of warming matters #COP24 #ClimateAction pic.twitter.com/n8p40XvhYS