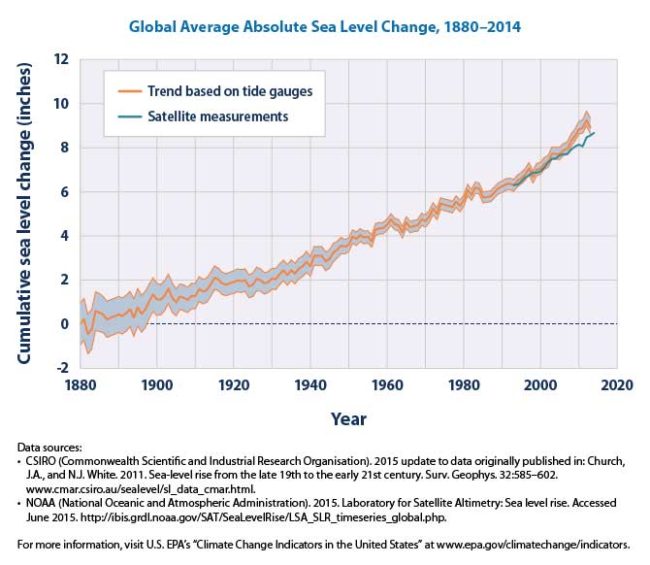 Sea Level is rising. As illustrated above, it is been slowly doing so for some time, this is a measurable verified fact. If you ever wondered if there was some unambiguous clear decisive evidence that the world truly is warming then this is it. Crack open the Wikipedia page on the topic and you will read some truly scary stuff …

Because of the slow inertia, long response time for parts of the climate system, it has been estimated that we are already committed to a sea-level rise of approximately 2.3 metres (7.5 ft) for each degree Celsius of temperature rise within the next 2,000 years.[4] IPCC Summary for Policymakers, AR5, 2014, indicated that the global mean sea level rise will continue during the 21st century, very likely at a faster rate than observed from 1971 to 2010.[5] Projected rates and amounts vary. A January 2017 NOAA report suggests a range of GMSL rise of 0.3 – 2.5 m possible during the 21st century.[6]

The UN’s IPCC is rather grim reading, but a new report that is focused on the Arctic suggests that the IPCC has been way too optimistic.

There exists an Arctic Council that is an intergovernmental forum of nations that have a physical footprint in the Arctic – to be specific Canada, Denmark, Finland, Iceland, Norway, Russia, Sweden, and the United States. Under their guidance there is what is known as the Arctic Monitoring and Assessment Programme (AMAP). The remit of AMAP is … to produce sound science-based, policy-relevant assessments and public outreach products to inform policy and decision-making processes.

So the essence of this is that they have a new evidence-based report that considers all the latest data and insights into what is going on in the arctic.

The summary of the report entitled “Snow, Water, Ice and Permafrost” can be downloaded from here.

How much will sea level have risen when we get to 2100?

That very much depends upon what happens, but basically …

Note that these estimates are at the low end of the scale here, these are the bare minimum values. However when compared to the 2013 IPCC estimates (which were 32 cm for something akin to Paris Agreement compliance, and 45 cm for Business as usual), then clearly this is almost a doubling of that. The comparison here is not mine, but rather is a specific comparison within the report itself.

The basis for this comes from the rather extensive research done by 90 scientists and 28 peer reviewers who were commissioned to work within the AMAP remit, so this is not a politically motivated stance, but rather is a science based one.

The report is not simply about sea level rise, but instead is a very comprehensive analysis of everything. To give you a feel for it, I’ve quote-mined a few snippets so that you can gain a very high-level summary of it all.

1. The Arctic’s climate is shifting to a new state

With each additional year of data, it becomes increasingly clear that the Arctic as we know it is being replaced by a warmer, wetter, and more variable environment. This transformation has profound implications for people, resources, and ecosystems worldwide.

The Arctic Ocean could be largely free of sea ice in summer as early as the late 2030s, only two decades from now.

The recent recognition of additional melt processes affecting Arctic and Antarctic glaciers, ice caps, and ice sheets suggests that low-end projections of global sea-level rise made by the Intergovernmental Panel on Climate Change (IPCC) are underestimated.

Changes in the Arctic may be affecting weather in mid-latitudes, even influencing the Southeast Asian monsoon.

2. Climate change in the Arctic has continued at a rapid pace

Arctic temperatures are rising faster than the global average

The frequency of some extreme events is changing.

The decline in sea ice continues, with variation from year to year.

The area and duration of snow cover are decreasing.

The loss of land-based ice has accelerated in recent decades.

The impacts of Arctic changes reach beyond the Arctic.

3. Changes will continue through at least mid-century, due to warming already locked into the climate system

The melting of land-based ice will contribute signi cantly to sea-level rise.

Arctic changes will a ect sources and sinks of important greenhouse gases.

Reducing concentrations of greenhouse gases in the atmosphere will make a difference.

Efforts to control greenhouse gas emissions can have a major impact on sea-level rise after mid-century.

The near-future Arctic will be a substantially di erent environment from that of today, and by the end of this century Arctic warming may exceed thresholds for the stability of sea ice, the Greenland ice sheet, and possibly boreal forests.

Reducing knowledge gaps will improve our ability to respond to current and future changes in the Arctic.

What is the source of sea level rises?

They have a nice chart that sums up where sea-level rise is coming from. It is as follows … 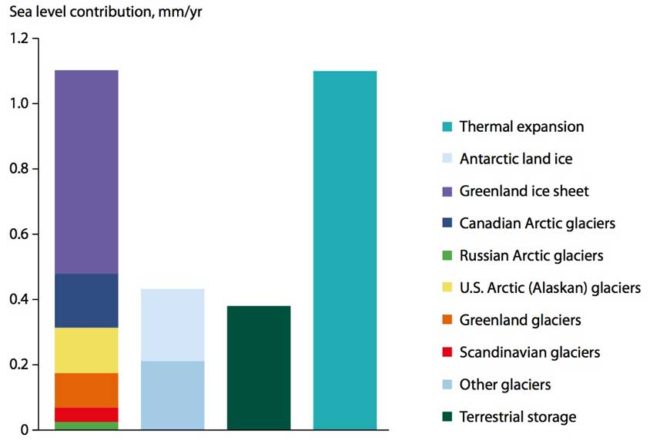 Bottom Line: When it comes to climate change, we really really do not want to seriously consider doing nothing to be a viable option, even the best we can achieve will result in consequences in the centuries to come.