Last Friday a new paper on the melting of the largest Ice Shelf in Antarctica was published.

Available in AAAS, it is entitled …

It is open access, so no paywall, you can view the entire paper without any hassle (yea).

What is it telling us?

Basically the subject line says it all. The warmer ocean is rapidly eating away underneath the Totten Ice Shelf in East Antarctica.

They specifically studied and gathered data from around the Totten Glacier in East Antarctica.

The Totten glacier and its ice shelf is seriously very big and contains rather a lot of ice (think California sized). Melt all of the ice contained there and sea level will rise by about 11 feet.

No, you will not wake up to find a rather high tide tomorrow, such a melt would take time. Also the melting of the ice shelf itself will not add to sea level rise since it is already floating. If however the ice shelf collapses, that then opens the door for the ice on the glacier itself. Once a shelf disappears, towering glaciers that had piled up behind it in fjords along the sea’s edge are free to slide into the ocean. And slide they do, adding substantial volume to the sea.

We are already witnessing ice shelf  disintegration in the West Antarctic. Larson A collapsed in 1995, Larson B collapsed in 2002, and a collapse of Larson C now appears to be underway. It would appear that something similar is also possible in the East Antarctic.

Totten is a big deal because is it huge.

The conclusion that they advance is that rapid basal melt of the Totten Ice Shelf is being driven by the flux of warm ocean currents into the cavity under it and is eating it away.

The presence of cavities under the ice shelf was previously known about, and so it had been speculated that it was in theory potentially possible for warmer ocean currents to flow into these cavities.  What is new here is that they have gathered data that demonstrates that this is actually happening.

You might perhaps be wondering where exactly the Totten Ice Shelf actually is. They have a diagram that illustrates that for you … 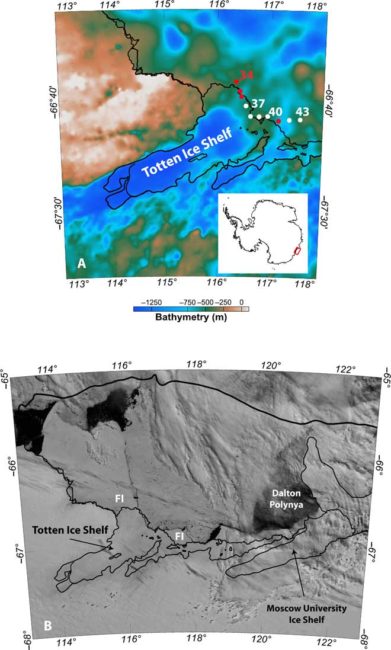 You can find a full PDF of the published paper here.