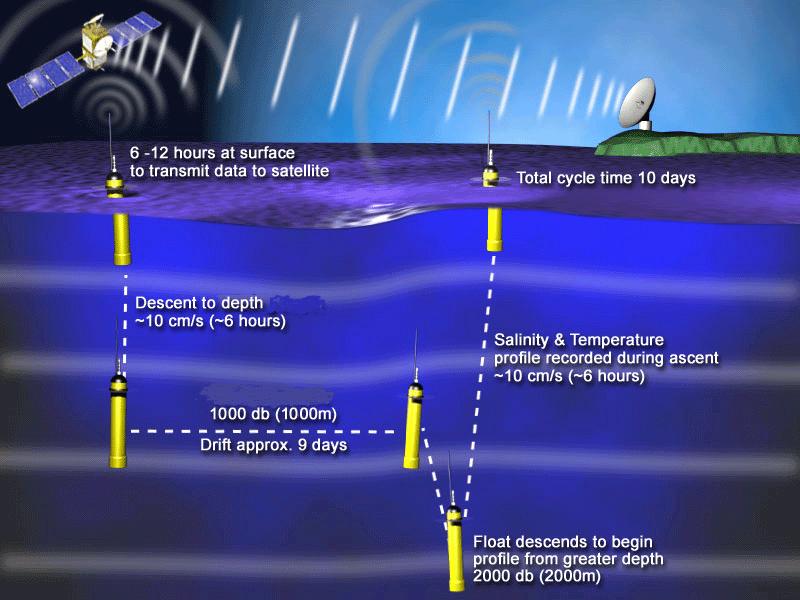 To answer this question all we need do is to stick a global thermometer into the ocean and measure what is going on. Easy right?

Actually yes it really is like that. There exists a vast network of roughly 3,800 Argo floats scattered right around the planet. Each individual one goes through a continious 10 day cycle that involves it sinking down measuring both the temperature and salinity, then ascending back up and transmitting the collected data.

Deployment began in 2000, and so from about 2007 onwards there was a decent network in place that enabled continuous real-time monitoring of the temperature, salinity, and velocity of the upper ocean. All the data is relayed and made publicly available within hours of collection.

The following illustrates the current coverage …

The new insights come via a paper published is Science on 11th Jan 2018 titled “How fast are the oceans warming?“. It basically points you towards the recent studies that used the latest Argo data.

As a bit of further background it is first worth understanding that in 2013 the Intergovernmental Panel on Climate Change’s Fifth Assessment Report (AR5) featured five different time series of historical global Ocean Heat Content for the upper 700 m of the ocean.

Well yes, each was based upon different ways of data processing for historical data, and to make things even more complicated, the ocean heat content that they all revealed was smaller than those projected by most climate models. It was all very much, “This is what we have, and this is where we are” type of stuff, no fudging or fiddling, it laid it all out asis.

The Conversation moves on

Inevitably a better richer dataset will yield better insights … enter stage-left the analysis of the latest Argo data via recent studies. Well OK, that’s a tad simplistic. Since AR5 much has happened, and that includes not only improvements in ocean heat content datasets via Argo, but also the application of corrections to historical data. Previous corrections applied between AR4 and AR5 relied on very different assumptions of the error sources and that led to substantial differences among correction schemes. Since AR5, the main factors influencing the errors have been identified.

What do the latest studies reveal?

Because of the rising concentrations of heat-trapping gases, a lot more energy is pouring into the climate system. About 93% of that has accumulated in the ocean as increased ocean heat content.

Recent observation-based estimates now confirm the rapid warming of Earth’s oceans over the past few decades.

The Models were right

The relatively short period after the deployment of the Argo network in the early 2000s has resulted in superior observational coverage and reduced uncertainties compared to earlier times.

The oceans are heating up far faster that the IPCC AR5 previously indicated back in 2013. Needless to say, that’s really not good, it leads to far more intense storms, greater sea-level rise due to thermal expansion, and of course accelerated melting, and more.

Some good media coverage of this is probably the Rolling Stone article – “The Oceans Are Warming Fast, and Our Lives Are About to Change” (Jan 14th) …