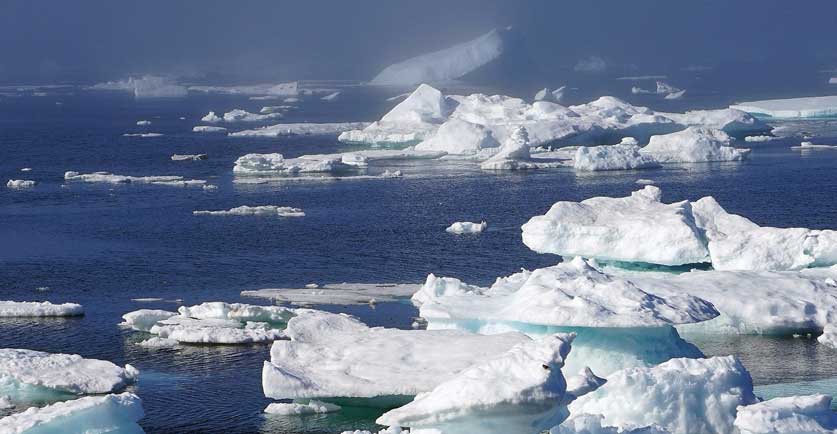 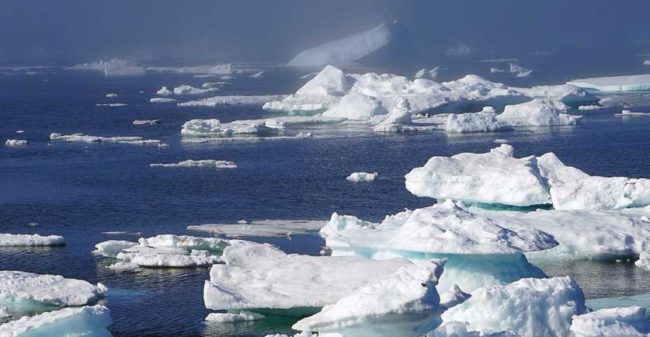 The National Snow and Ice Data Center (NSIDC) tracks what is going on in the Arctic and issues regular updates. While they do of course provide datasets, they also present a very digestible regular insight into what is going on.

The latest update is that the Arctic Sea Ice maximum has been reached for this year and so the seasonal melt has commenced. 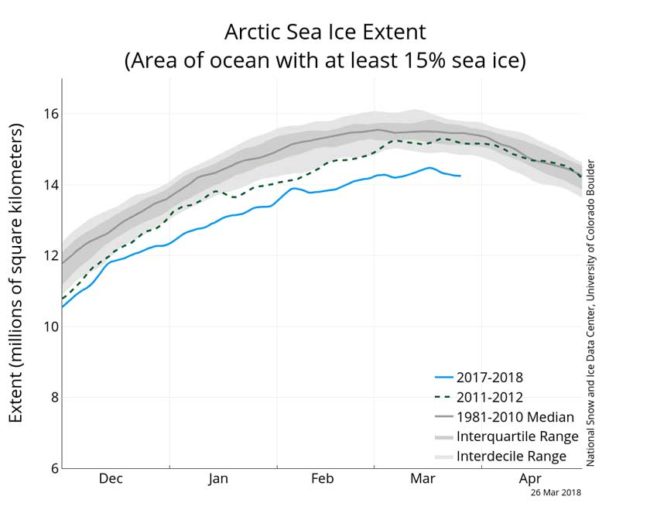 Arctic sea ice appears to have reached its annual maximum extent on March 17. This is the second lowest Arctic maximum in the 39-year satellite record. The four lowest maximum extents in the satellite record have all occurred in the past four years. NSIDC will post a detailed analysis of the 2017 to 2018 winter sea ice conditions in our regular monthly post in early April.

If we just had the second lowest, then that just might cause you to wonder what the lowest extents have been. Since they have very precise satellite records dating back to 1979 then it becomes easy to construct a table containing the top 10 lowest. Here it is …

What becomes immediately apparent is that the four lowest extents for the arctic sea ice maximum have been the four past years 2015, 2016, 2017, and 2018.

How important is tracking the winter maximum?

Rather obviously there are seasonal variations of a summer melt and then ice growth during the winter period. We also know that the maximum ice extent is usually February / March and the minimum is usually sometime about September.

If we put aside the aspect of it simply being interesting to note when it happens and how far the extent was, then what does this really tell us?

What is perhaps more important is to monitor and track not just the daily extents and also the monthly averages. If you track just the maximum or minimum then you are not simply measuring climate, but you are also mixing in weather. Ice can rapidly vary in just one month and be impacted by wind and currents, hence it becomes important to average things out so that you smooth out the weather variations and can then see the climate effects.

As an example, below you will find a chart illustrating the February averages over the years. Because we are looking at an averaged february measurement, we have in effect smoothed out the daily weather variations and so over time we can see the downward climate trend over the various February over the decades of accurate satellite measurements … 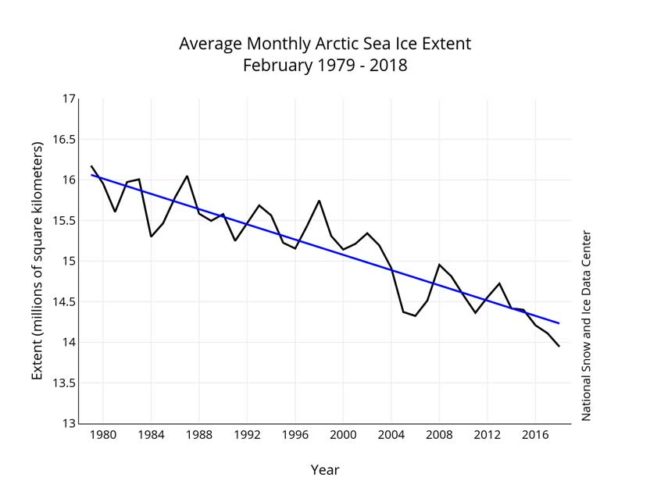 It is a siren that is loudly alerting us that climate change is real. Climate Change is not simply something that will happen in a far distant future, but instead it is happening now.

We should not simply be “interested”, but rather we should be worried about what is happening, why it is happening, and understand that we face an actual existential crises.

“We’ve probably known for 100 years that as the climate warms up in response to loading the atmosphere with greenhouse gases, we would see the changes first in the Arctic, This is what we expected and this is exactly what has happened. It’s a case where we hate to say we told you so, but we told you so.” – Mark Serreze, director of the National Snow and Ice Data Center in Boulder,

Over the past one million years the amount of CO2 in our atmosphere has bounced between 180 and 280 ppm. We have pushed that up to close to 409.66 ppm right now and it is still climbing.

With each passing decade, the ice grows a bit less in winter, and melts a bit more in summer.

The disappearing sea ice is a key indicator of a warming Arctic. And the consequences of a warming Arctic can be felt further south. A growing number of researchers are linking the changes up north to unusual winter weather in North America and Europe.

In recent weeks, the Northeastern United States faced four nor’easters in as many weeks, and Western Europe encountered subzero temperatures that were far lower than at the North Pole.

The weakening jet stream also helps keep weather patterns locked in place, Dr. Francis said. “We’ve been in this pattern along the East Coast that is very conducive to the formation of nor’easter-type storms,” she said. “Part of the reason for that is because we’ve had this pattern in the jet stream that’s been so persistent.”

Dr. Francis’s theory is not settled science, Dr. Serreze said. Other researchers have posited that changes in ocean currents in the tropical Pacific are the source of the recent weather events in the midlatitudes.

“But I would say that the weight of evidence is resting on the side of a significant Arctic influence,” Dr. Serreze said.

The loss of Arctic sea ice should concern everyone, he added. “What happens in the Arctic doesn’t stay in the Arctic,” he said.