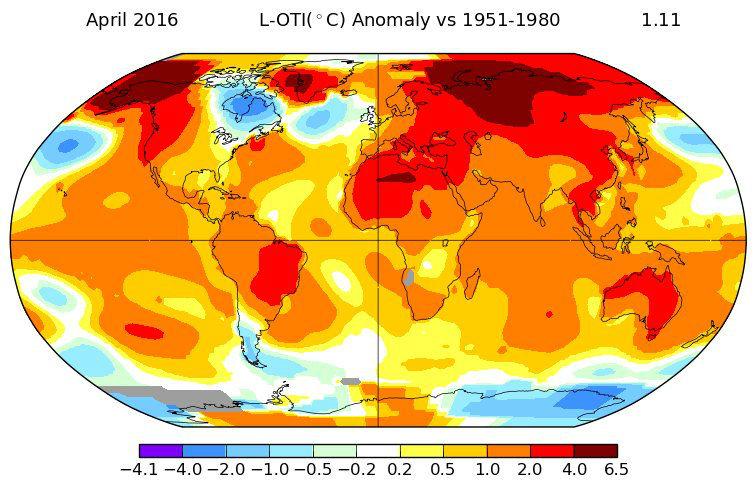 There is clearly a trend … January 2016 was the warmest January ever recorded. Then February happened and that blew away the January records. This was all then quickly followed by new records for March, and now April.

The latest update comes from the numbers released by NASA over the weekend and so now the media is (quite rightly) highlighting it all.

The truly astonishing thing is that the top seven months out of skew with the norm have been the last seven months.

It might (for some) perhaps prompt a couple of questions …

Where Can I find this NASA Data?

The raw data (just the numbers in a text file) is here.

If this is all true, then why don’t I see it here in the UK?

Take a peek at the above picture, it shows that overall things really are heating up, especially in the Arctic, while here in the UK we appear to be sitting near the edge of that bit that could rightly be labeled (not excessively above normal), and sadly that is a rather small circle, so don’t use what you see outside the window in the UK as a definitive observation of this new abnormal temperature rise because it is a small exception to it all

Yikes, so what about all that Ice in the Arctic?

The rather obvious is that greatly increased temperatures over the arctic should lead to a rapid and record breaking decline in sea ice over the Arctic, so do we see that happening?

Yes we do indeed, here is the latest available daily chart (dated 15th May) showing a very dramatic record breaking decline in arctic sea ice that is also record breaking … 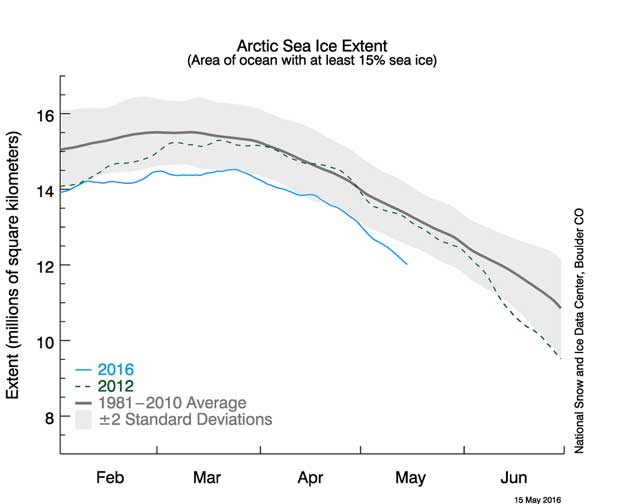 The lack of sea ice that normally reflects solar radiation back out into space is a big deal because it leads to even more global heating taking place.

Meanwhile over in Greenland, the seasonal melt has already started early and excessively … 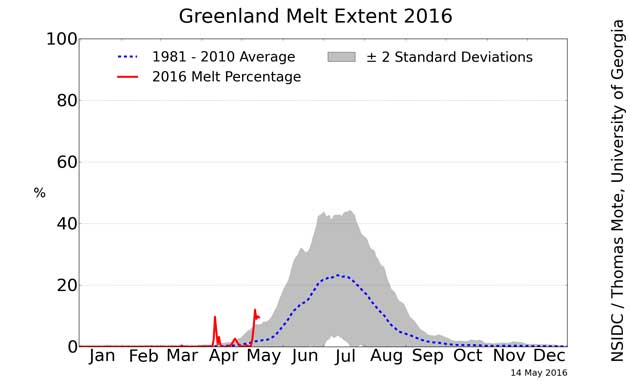 Clearly yes, the consequences of this accelerated climate change will result in more extreme weather events rather a lot sooner than anticipated.

The following tweet from Ed Hawkins, a climate scientist in the National Centre for Atmospheric Science at the University of Reading, perhaps illustrates just how dramatically things are accelerating now …

No, and this is because we as a species are responsible for these temperature changes, this is not some random event totally beyond our ability to do anything about, and so we can still take steps are address this.

That however does not mean we should stop paying attention and assume that somebody else will sort it out, because quite clearly the last few months of 2015 and all of 2016 is not more of the same, so far it is something quite different … 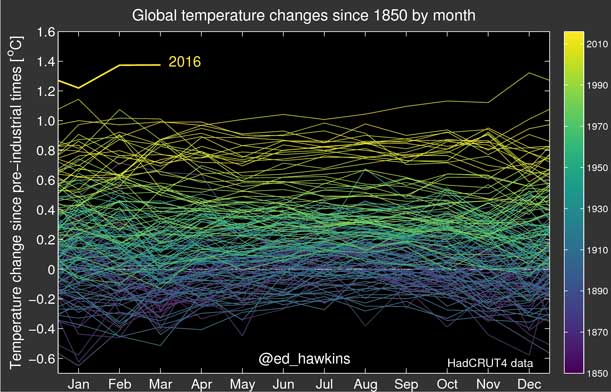