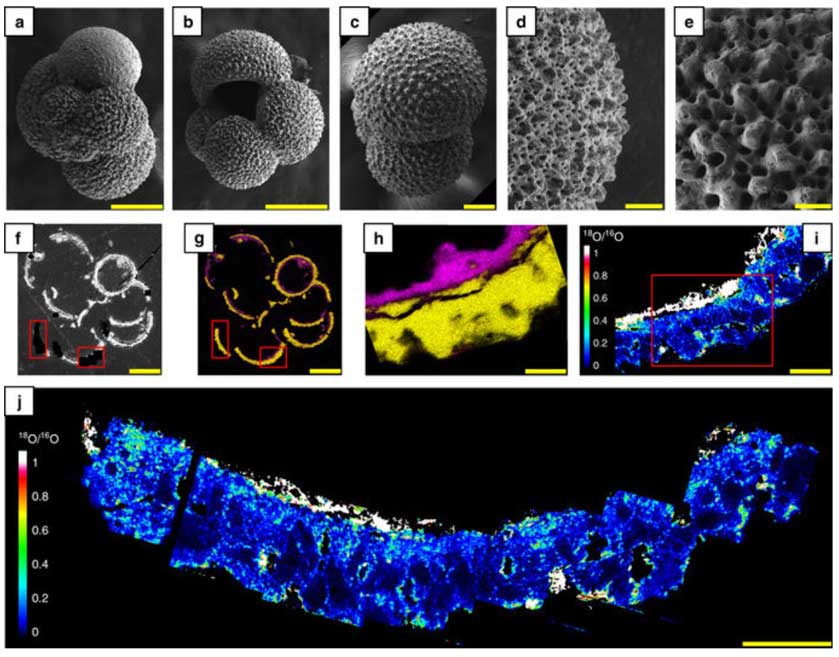 There is a new paper with a rather obscure sounding title that appears to have some serious implications regarding ocean heat over the past 100 million years.

Let’s take this a step at a time.

A common method for determining paleotemperatures has been to measure the Oxygen-isotope compositions of fossilised planktonic and benthic foraminifera. Such measurements give us an almost continuous record of surface- and deep-ocean paleotemperatures going back about 100 million years. This is a widely used and generally accepted means for gaining such measurements.

There is one flaw here. There has been an overlooked factor that can potentially alter things during sediment burial and so skew such measurements. What the paper does is to expose this flaws, and so that now leads these researchers to the following conclusion …

Our results suggest that the late Cretaceous and Paleogene deep-ocean and high-latitude surface-ocean temperatures were significantly lower than is generally accepted, thereby explaining the paradox of the low equator-to-pole surface-ocean thermal gradient inferred for these periods.

Well OK then, so this at first might not strike you as a huge deal. If indeed this is correct, then it means that the way we calculated ocean temperatures up to 100 mullion years ago has not been wholly accurate.

It has, until now, been generally accepted that the temperature of the oceans has fallen by 15 degrees over the past 100 million years. This appears to change that and instead reveals an ocean that has had a more or less stable temperature and has not changed.

How does that impact us today?

To truly grasp what is going on now, we need to be able to place our modern human-induced climate change within the context of the bigger picture. The past not only gives us context, but it also gives us a better understanding of hydrosphere evolution.

“Oceans cover 70% of our planet. They play a key role in the earth’s climate. Knowing the extent to which their temperatures have varied over geological time is crucial if we are to gain a fuller understanding of how they behave and to predict the consequences of current climate change more accurately.”

– Anders Meibom, one of the authors. Head of EPFL’s Laboratory for Biological Geochemistry and a professor at the University of Lausanne

What the study suggests is that the temperature gradients of the late Cretaceous and Paleogene oceans were likely not very different from the current ones.

This is not a definitive conclusion, but instead is just the beginning of a rethink regarding paleotemperatures. A lot more work is needed …

“To revisit the ocean’s paleotemperatures now, we need to carefully quantify this re-equilibration, which has been overlooked for too long. For that, we have to work on other types of marine organisms so that we clearly understand what took place in the sediment over geological time.”

… and of course that work is now underway.

Bottom Line: If indeed the temperatures within the oceans have been stable for the past 100 million years, then within that context the changes we are now observing on a global scale, and that includes ocean warming, is even more dramatic than previously appreciated.