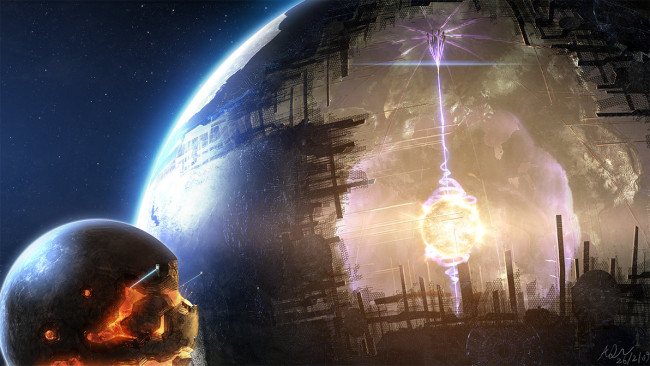 Now, let’s look into why that is the case.

The UKs Independent, along with many other sources, are running a story about the supposed discovery, the title of their article reads “Astronomers may have found giant alien ‘megastructures’ orbiting star near the Milky Way“, and then the article goes on to explain things as follows …

A large cluster of objects in space look like something you would “expect an alien civilization to build”, astronomers have said.

Jason Wright, an astronomer from Penn State University, is set to publish a report on the “bizarre” star system suggesting the objects could be a “swarm of megastructures”, according to a new report.

“I was fascinated by how crazy it looked,” Wright told The Atlantic. “Aliens should always be the very last hypothesis you consider, but this looked like something you would expect an alien civilisation to build.”

OK, so what is going on here?

We shall start at the beginning – the data at the root of all this comes from the Kepler telescope, the one in orbit that was put up by NASA as a planet hunter back in 2009. Now to help remove a bit of confusion, it orbits the sun, not the Earth and so is kept well away from the stray light, and gravitational influence of Earth because that might interfere. It works by pointing in a fixed static direction for years and carefully monitors a distinct collection of roughly 150,000 stars in this fixed region of the sky looking for the ever so tiny reduction in the brightness of such distant stars. This fractional dimming is the signature they are after because it happens as a planet moves around a star and thus blocks a small fraction of the light reaching us. This, for rather obvious reasons, is known as the transit method.

Now that we understand that, lets move on.

One of those stars labelled KIC 8462852 has been observed to be a tad odd and so it was flagged up back in 2011. As reported elsewhere …

In a paper submitted to the journal Monthly Notices of the Royal Astronomical Society, astronomers, including citizen scientists from the Planet Hunters crowdsourcing program, report: “Over the duration of the Kepler mission, KIC 8462852 was observed to undergo irregularly shaped, aperiodic dips in flux down to below the 20 percent level.”

The research paper is thorough, describing the phenomenon, pointing out that this star is unique – we’ve seen nothing like it. Kepler has collected data on this star steadily for four years. It’s not instrumental error. Kepler isn’t seeing things; the signal is real.

“We’d never seen anything like this star,” Tabetha Boyajian, a postdoctorate researcher at Yale University and lead author, told The Atlantic. “It was really weird. We thought it might be bad data or movement on the spacecraft, but everything checked out.”

OK, so any details?

Follow-up studies focus on two interesting transit events at KIC 8462852, one that was detected between days 788 and 795 of the Kepler mission and between days 1510 to 1570. The researchers have tagged these events as D800 and D1500 respectively.

The D800 event appears to have been a single transit causing a star brightness drop-off of 15 percent, whereas D1500 was a burst of several transits, possibly indicating a clump of different objects, forcing a brightness dip of up to 22 percent. To cause such dips in brightness, these transiting objects must be huge.

So basically that’s it, that is what has actually been measured, a rather odd dip in the brightness of a distant star that nobody can fully explain.

Various ideas have been explored such as a disk of dust, or debris from a huge planetary collision or a clump of comets and to cover all that we have the following paper …

They have a conclusion …

Over the duration of the Kepler mission, KIC 8462852 was observed to undergo irregularly shaped, aperiodic dips in flux down to below the 20% level. The dipping activity can last for between 5 and 80 days. We characterize the object with high-resolution spectroscopy, spectral energy distribution fitting, and Fourier analyses of the Kepler light curve. We determine that KIC 8462852 is a main-sequence F3 V/IV star, with a rotation period ∼ 0.88 d, that exhibits no significant IR excess. In this paper, we describe various scenarios to explain the mysterious events in the Kepler light curve, most of which have problems explaining the data in hand. By considering the observational constraints on dust clumps orbiting a normal main-sequence star, we conclude that the scenario most consistent with the data in hand is the passage of a family of exocomet fragments, all of which are associated with a single previous breakup event. We discuss the necessity of future observations to help interpret the system.

But what about the Aliens?

Well yes, somebody else, one guy, has popped up with the idea that it might not be natural. The Atlantic reports …

Jason Wright, an astronomer from Penn State University, is set to publish an alternative interpretation of the light pattern … Wright and his co-authors say the unusual star’s light pattern is consistent with a “swarm of megastructures,” perhaps stellar-light collectors, technology designed to catch energy from the star.

“When [Boyajian] showed me the data, I was fascinated by how crazy it looked,” Wright told me. “Aliens should always be the very last hypothesis you consider, but this looked like something you would expect an alien civilization to build.”

… They want to point a massive radio dish at the unusual star, to see if it emits radio waves at frequencies associated with technological activity.

If they see a sizable amount of radio waves, they’ll follow up with the Very Large Array (VLA) in New Mexico, which may be able to say whether the radio waves were emitted by a technological source, like those that waft out into the universe from Earth’s network of radio stations.

Assuming all goes well, the first observation would take place in January, with the follow-up coming next fall.

… and so from the above, the press and social media has been running with the “Alien ‘megastructures’ orbiting star have been discovered” claim.

Something odd has been observed, there is a sort of natural explanation for it, but nothing conclusive. Somebody would like to test the idea that it might not be natural by looking for radio waves, but they are simply exploring a wholly valid “what if …” question, and that is where things really stand. Asking the question is fine, but to then declare it to be “the” solution on the basis of no real data is not.

No, we have not discovered “Alien megastructures”, and anybody who claims that we have right now is promoting BS.

The basic principle at play is this – there are things that we know and there are things that we do not know, and right now fully explaining these odd observations tends to lean towards the “not known and not understood” category. To then make the leap from that to “Aliens” on the basis of no evidence at all is to step out of the realm of science and directly into a category marked “fiction”.

I don’t know and neither does anybody else … yet, but it is of course a possibility we should consider, but not to the exclusion of far simpler more natural explanations. Until we have evidence, then the only truly viable comment on this is “I don’t know, let’s go and find out”.

2 thoughts on “Claim: Alien ‘megastructures’ orbiting star have been discovered”