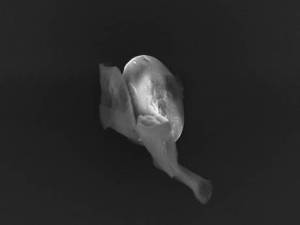 Oh wait … (well you did perhaps expect that … yes?)

OK, so let’s dig into the story a bit and see what we actually have, this is basically the claim …

… and how did they make this discovery?

Professor Milton Wainwright and his team made the discovery after launching a balloon high into the stratosphere during the Perseid meteor shower last year.

The balloon was launched 27 km into the earth’s atmosphere and was equipped with sterile slides designed to capture tiny biological organisms.

During the trip one of the slides caught an organism, around 10microns in size, which Wainwright says is a structure ‘colloquially called ‘the dragon particle’ which scientific analysis shows is made of carbon and oxygen and is therefore not a piece of cosmic or volcanic dust.’

When asked, (and he does get asked), he responds as follows …

He was also unequivocal that the biological entity was “like nothing found on earth”.

“What is amazing is that these organisms appear on the sampling stubs in an absolutely pristine condition,” he told the paper.

“There is no pollen, grass or pollution particles found with them, or for that matter soil or volcanic dust.”

“Unless a means of lifting them from Earth exists which selectively sieves them out from other Earth-derived debris then they must be incoming from space.

“This, plus the fact that some of the biological material samples by the team produce impact craters when they hit the sampler, confirms their space origin.”

The only ever so slight flaw here with this is that there is no definitive catalogue of all atmospheric particles, so sorting the material they capture into known vs. unknown, where “known” is clearly material from earth, and “unknown” is immediately categorized as alien is truly a huge leap that discards the far simpler alternative and rather more obvious explanation.

Oh but he has a peer-reviewed paper on this?

Apparently it has all been published in the scientific publication called the Journal of Cosmology, (article 14 here) so it just must be true.

Oh wait … (are we seeing a pattern here yet?)

The Wikipedia article on that journal describes it like this …

The quality of peer review at the journal has been questioned.[2][3][4][5][6][7] The journal has also been accused of promoting fringe viewpoints and speculative viewpoints on astrobiology, astrophysics, and quantum physics. Skeptical blogger and biologist PZ Myers said of the journal “… it isn’t a real science journal at all, but is the… website of a small group… obsessed with the idea of Hoyle and Wickramasinghe that life originated in outer space and simply rained down on Earth.”[4][10] The journal has responded that the paradigm “life on Earth came from Earth” is like a religious belief.[11]

Is this a new claim?

Nope, the exact same claim was make one year ago in (insert drum roll here) the UK’s Independent, and one year later nothing has changed — same picture, and exact same claim — except perhaps for the arise of an expectation that we all have a severe bout of alzheimers and will not remember this popping up last year.

It was robustly debunked then, and that exact same debunking still stands.