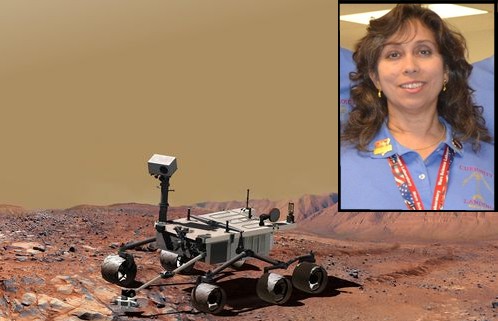 While in the US I had the privilege of listening to Nagin Cox from the mission operations team for the Mars Science Laboratory (MSL) – NASA’s Mars Curiosity Rover.

OK, first a bit of background on her …

Nagin graduated from Cornell University with a BS in Operations Research and Industrial Engineering and a BA in Psychology and was commissioned as an officer in the US Air Force. She worked in F-16 Aircrew Training and received a masters degree in Space Operations Systems Engineering from the Air Force Institute of Technology. As a captain, she served as an Orbital Analyst at NORAD/Space Command in Cheyenne Mountain, Colorado Springs. In 1993, joined the Jet Propulsion Laboratory (JPL) and has since served as a systems engineer and manager on multiple interplanetary robotic missions including NASA/JPL’s Galileo mission to Jupiter, the Mars Exploration Rover Missions and the Kepler telescope mission to search for earth-like planets around other stars. She is currently on the mission operations team for Mars Science Laboratory (MSL)- NASA’s Mars Curiosity Rover

So what time is it?


She wears three watches, but if you work on Mars then you really do need to keep tabs on not just multiple, but also very different time zones.

When on shift they switch to working a Mars day, and that can be challenging because the length of a day on Mars is 40 minutes longer than the length of a day on Earth, so if you start work at say 8am on day 1, then on day 2  you start work at 8:40, and 9:20 on day 3, and so on … and as the days pass each and every working day starts 40 minutes later, so as you might imagine that can really bugger up your internal clock. Apparently they can sustain this pattern for about three months and then need to quit and stop this shift pattern.

It does also lead me to wonder about humans living on Mars, could they actually adapt permanently to the length of days on Mars?

Very early in its ongoing mission, NASA‘s Curiosity rover discovered unambiguous fluvial sediments on Mars. The properties of the pebbles in outcrops suggested former vigorous flow on a streambed, with flow between ankle- and waist-deep. – Link

On December 9, 2013, NASA reported that the planet Mars had a large freshwater lake (which could have been a hospitable environment for microbial life) based on evidence from the Curiosity rover studying the plain Aeolis Palus near Mount Sharp in Gale Crater – Link.

Gosh this is exciting stuff … the discovery that there was once life on Mars would be truly amazing, and they appear to be talking steps down the road to such a discovery.

Mount Sharp is living up to its name. One recent surprise was the discovery of rocks that have been weathered and are very sharp. Last month’s 660-foot (200 meters) trip across a region called the “Zabriskie Plateau” has been damaging Curiosity’s aluminium wheels, and so Nagin mentioned that they now plan routes to drive around some of the really rough patches.

“The wheels took some damage getting across Zabriskie Plateau, but it’s less than I expected from the amount of hard, sharp rocks embedded there,” – Curiosity project manager Jim Erickson.

“The rover drivers showed that they’re up to the task of getting around the really bad rocks. There will still be rough patches ahead. We didn’t imagine prior to landing that we would see this kind of challenge to the vehicle, but we’re handling it.”

Longer term this discovery will of course feed into the rover design for Mars 2020 (the next rover mission).

I was chatting to her afterwards and did ask what she thought about Mars One, the Dutch initiative to send folks to Mars on a one way ticket.

Personally I’m very very skeptical about the whole thing, and was interested to hear that the folks at NASA are equally skeptical about it all in private, but in public opt to remain quiet.

The Mars One folks have now reached the stage where they have eliminated most who volunteered to go and are down to just 705 from the 200,000 who applied to go. Nagin observed that if she was one of them, then she would be asking some rather hard questions about how they actually intend to do this and how they propose to crack some of the really hard problems.

So here below is the sunset on Mars, and right now seeing the picture on earth is perhaps as far as I want to get to that sight, because while it would be exciting to go, there are way too many problems that have not been solved, so if the Mars One folks really do send humans there, then it really will be a one way ticket – with our current level of technology they will not be coming back … ever.

It is perhaps best to solve a few more of the rather fundamental problems before signing up to go.

1 thought on “Catching up with the MARS Curiosity rover”