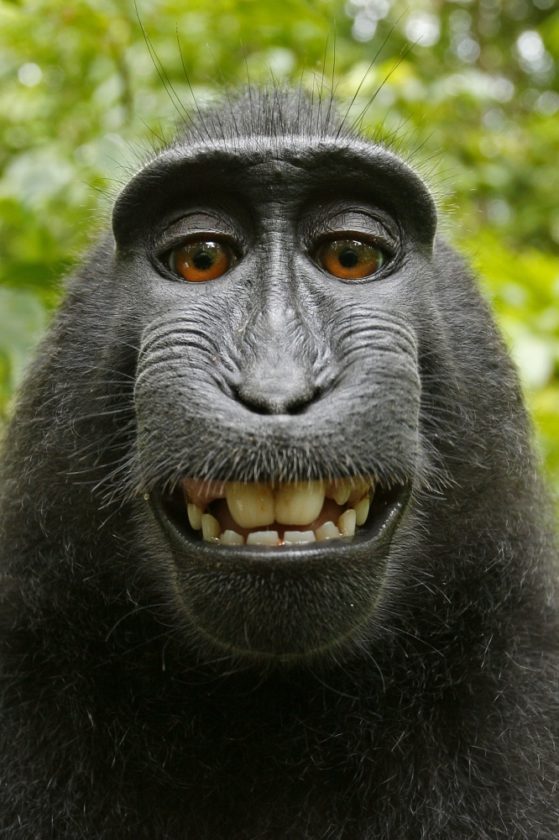 Above is a fabulous picture of a grinning female macaque – so who actually owns the copyright for this?

In this case, because it is in dispute … the answer is supposedly nobody and so it is claimed to sit in the public domain.

So who actually took the picture?

Apparently it grabbed the camera and took a selfie, and so the copyright reasoning is as follows:

It was of course disputed, but Wikimedia reviewed the claim and dismissed it with the above thinking.

The UK’s Telegraph reports the details …

British nature photographer David Slater was in Indonesia in 2011 attempting to get the perfect image of a crested black macaque when one of the animals came up to investigate his equipment, hijacked a camera and took hundreds of selfies.

Many of them were blurry and some were pointed at the jungle floor, but among them were a handful of fantastic images – including a selfie taken by a grinning female macaque which made headlines around the world and brought Mr Slater his 15 minutes of fame.

“They were quite mischievous jumping all over my equipment, and it looked like they were already posing for the camera when one hit the button,” he said at the time. “The sound got his attention and he kept pressing it. At first it scared the rest of them away but they soon came back – it was amazing to watch.

… and so after the picture appeared all over the place, he entered into a battle with Wikimedia over the copyright of the image.

It’s his profession, and so to claim public ownership is to deprive him of income. He might take 10,000 images a year, but only a few actually earn money and this was potentially the one. If he wished to take it further he would need to spend £10,000 and so far this has not actually been tested in court, it is simply a Wikimedia decision.

It does of course all open up a rather interesting discussion … as a blogger it is rather easy to just grab images off the internet, and if they are indeed in the public domain then that is fine (as it apparently is in this case at the moment), but what if it is not, what then? How does the owner then defend that copyright?

If it would potentially earn £5,000 if he could establish copyright, but then costs him almost twice as much to establish that claim, he will potentially cut his losses – then again, he might decide that there is a principle in play here and just go for it anyway.

The Internet is indeed disrupting rather a lot of things and that also includes copyright – in this case it is not just Mr Slater’s passion and hobby, but rather his bread and butter that is being impacted. Mr. Slater bought the camera, traveled to Indonesia, spent time, effort, energy, money. He might not have pressed the button on the camera, but he did press the “upload” button to upload the image, I don’t think the monkey actually went online on a MacBook Pro to upload the image, apple products just don’t reach that far yet.

Consider the case where a camera trap is setup to trigger on a sensor … technically the animal triggered the image in such a camera trap being taken, but it was the photographer who set it all up, did all the work involved in setting it all up, then processed and uploaded the image – in what way is this case different?

Bottom line: Wikimedia have made the wrong decision.

So what does the public think? 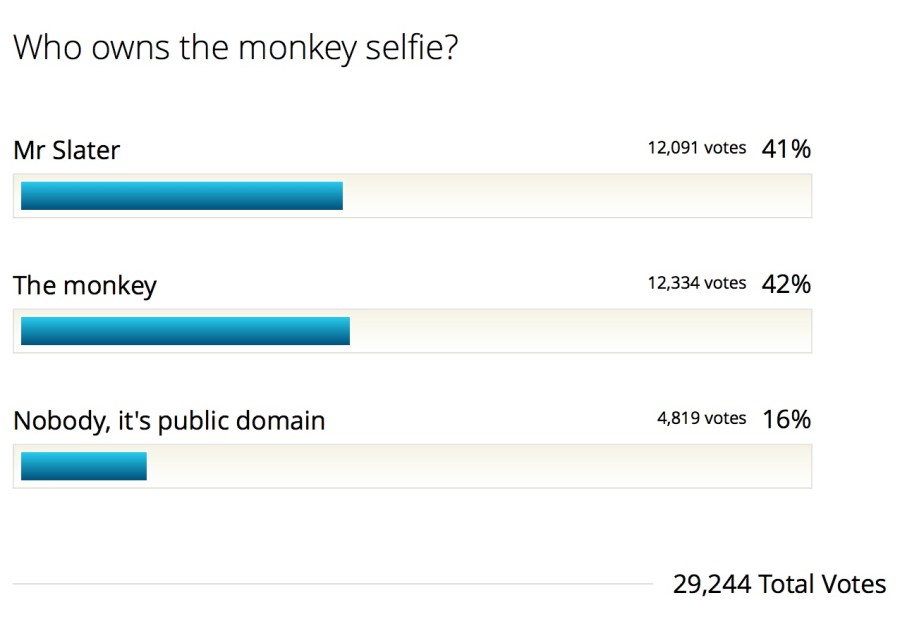