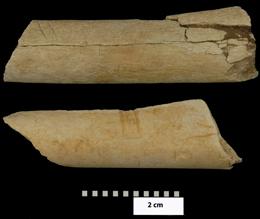 Early hominins were using stone tools to butcher meat as long ago as 3.4 million years, about 800,000 years earlier than previous evidence dates to, scientists report in this week’s issue of Nature.

The finding comes from an examination of animal bones found last year in the Lower Awash Valley of Ethiopia. This site is not far from the spot where the same research team, led by palaeoanthropologist Zeresenay Alemseged of the California Academy of Science, San Francisco, had previously discovered a 3.3-million-year-old juvenile Australopithecus afarensis fossil dubbed ‘Lucy’s Baby’. That find is one of the most complete skeletons of an ancient human ancestor to be discovered so far.

The animal bones — one from an impala-sized creature, the other from one closer in size to a buffalo — bear cut marks that indicate butchering, says their finder, Shannon McPherron, an archaeologist at the Max Planck Institute for Evolutionary Anthropology in Leipzig, Germany, and a member of Alemseged’s team.

This, he says, means that early hominins — presumably Australopithecus afarensis — were not only using tools, but also venturing out of the safety of the forests and onto the plains in search of meat.

However, they probably weren’t hunting, McPherron says; it is more likely that they were scavenging predator kills. Still, the search for large-animal meat is an important step in human development. “We’ve put this important, fundamental behaviour back into Lucy’s time,” says McPherron, who is lead author of the new study.

The same is true for tool usage. Previously, the earliest known date for tool usage was about 2.5 million years ago — right about the time that humanity’s own genus, Homo, was first emerging. Now, it seems that tool usage pre-dates our genus. “We’re pushing much deeper into our evolutionary past,” McPherron says.