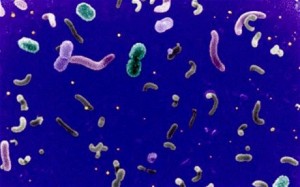 Now this is simply fascinating to me, and hopefully to you as well.

Venter, Eisen and colleagues report in the journal Public Library of Science One that they have analysed marine DNA and discovered genes that look quite different from any seen before.

To clarify, the tree of life, as we know it was basically divided up into 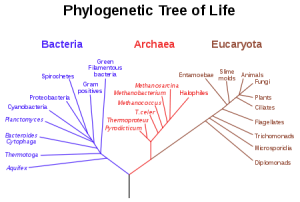 three classifications by Carl Woese in 1990. We have the archaea, bacteria, and eukaryote domains. In particular, it emphasizes the separation of prokaryotes into two groups, originally called Eubacteria (now Bacteria) and Archaebacteria (now Archaea). Woese argued that, on the basis of differences in 16S rRNA genes, these two groups and the eukaryotes each arose separately from an ancestor with poorly developed genetic machinery, often called a progenote. (see above for  a diagram that illustrates all this).

Oh, and least you wonder, the eukaryote domain is all the animals and plants, so thats where we fit in.

So anyway, each of these three domains are then divided up into kingdoms, phylum, class, order, family and then finally species.

Now, the big deal here is that Venter has potentially found evidence of an entirely new domain of life, because what they have does not fit into any of the current three domains.

So I guess it is now time once again to consider redrawing the tree of life. We have been here before because up until the 90’s we only had two branches. Also in 2004, Jean-Michel Claverie of the University of Mediterranean School of Medicine argued that mimivirus, the largest virus then known, might also represent a new domain. So this new work could even represent a fifth branch of life.

There are other possibilities here. What if its not a new domain, but is instead the result of some unusual accelerated rate of evolution.

Either way, its an exciting discovery that is truly fascinating.