As you might indeed expect, the ice covering the Arctic sea oscillates, we have the summer melt that is then followed by the winter freeze, and as we pass through these regular cycles the National Snow and Ice Data Centre measures what is happening and reports the latest on a daily basis.

They get reliable measurements of the sea ice extent from satellites that pass over the  polar region several times each day. To monitor Arctic sea ice, NSIDC primarily has used both the NASA Advanced Microwave Scanning Radiometer–Earth Observing System (AMSR-E) instrument on the NASA Aqua satellite and also the Special Sensor Microwave/Imager (SSM/I) instrument on the Defense Meteorological Satellite Program (DMSP) satellite.

Alas, the AMSR-E instrument is no longer functioning, so NSIDC now relies on just DMSP data.

So what is the latest News?

Looking back over the winter season, what is now seen is this …

On February 25, 2015, Arctic sea ice extent appeared to have reached its annual maximum extent, marking the beginning of the sea ice melt season. This year’s maximum extent not only occurred early; it is also the lowest in the satellite record.

Here is their graphical representation … 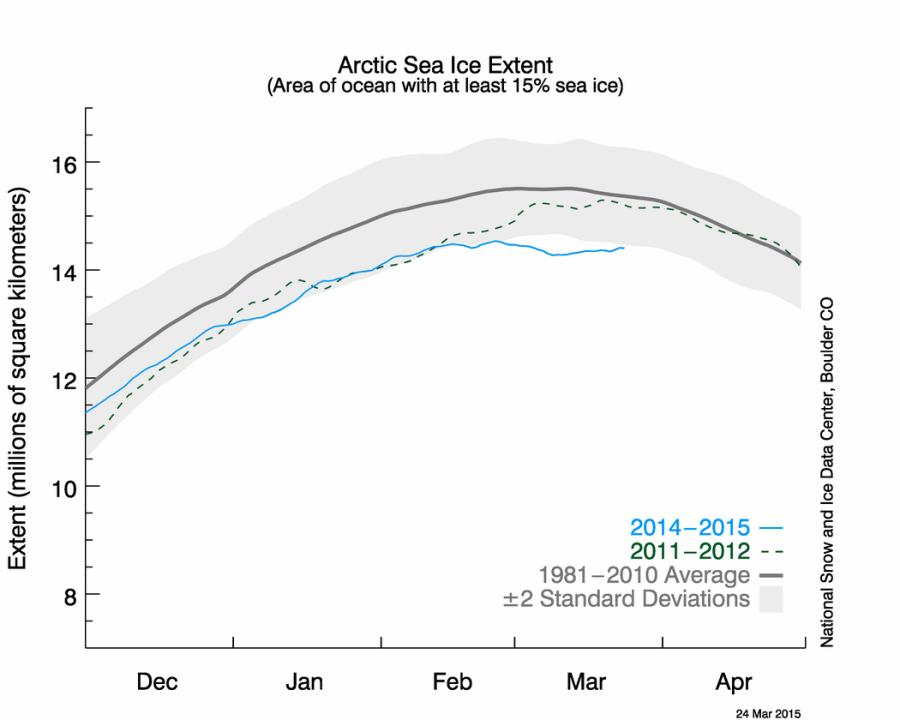 You can find more detail on all this here.

So why does this matter?

Ice acts like a giant reflector, and so as the sunlight hits a surface that is just ice, about 80% is reflected back into space.

If there was no ice then what you instead have is darker ocean and that would result in about a 90% absorption rate, and so the result is obvious – the ocean heats up, and you end up with even further temperature rises.

A small temperature increase at the poles leads to still greater warming over time, making the poles the most sensitive regions to climate change on Earth. According to scientific measurements, both the thickness and extent of summer sea ice in the Arctic have shown a dramatic decline over the past thirty years. This is consisistent with observations of a warming Arctic. The loss of sea ice also has the potential to accelerate global warming trends and to change climate patterns.

It is still a bit early to jump to any final conclusions because a late season spurt of Ice growth is still a possibility, but the window for that is now fast closing, and also looking at today’s data, I see no evidence of this, so I do not think it will now happen.

Once we get to the beginning of April, the NSIDC scientists will release a full analysis of the winter measurements (along with the monthly data for March of course).

If curious to read more about what this all means, then you should check the NSIDC Arctic sea ice maximum post.

A study from last year that has just been published online in Nature  reports that the water pouring into the atlantic from the melting of the Greenland ice sheet is having a dramatic effect, it is slowing down the Gulf steam (or to use their term, the Atlantic meridional overturning circulation (AMOC)).

Link: You will find the actual study here.

What they have measured over time is an unprecedented (that is their word) reduction in the AMOC over the twentieth century and particularly after 1970.

Being a scientific study they quite rightly also add the appropriate degree of caution with phrases such as “Possible changes in Atlantic meridional overturning circulation (AMOC)” and they also observe that since 1990 the AMOC seems to have partly recovered, so while the media might indeed run with headlines such as …

.. I’m personally inclined to step back and point out … er no, that is not what the study actually says, because they have measured a trend that has been happening over many decades and so I’m not sure the word “rapid” is something that should be applied to a process on such a timescale.

Their actual conclusion from the study is …

… and that is far more appropriate turn of phrase and so sets more accurate expectations – but then I guess the media is the media, they need to sell themselves and so will often not resist the temptation to crank up the drama a few inappropriate notches in order to hook your attention.

However, nor should the rather blatant evidence that is popping up, not just from Greenland, the Atlantic, and the Arctic sea ice, but all over the planet, be downplayed either because clearly it all adds up to a very dramatic change that is happening. This is not a change this is soon going to start, but rather it is a change that has already started, has been slowly taking place for many decades, and will continue to do so.