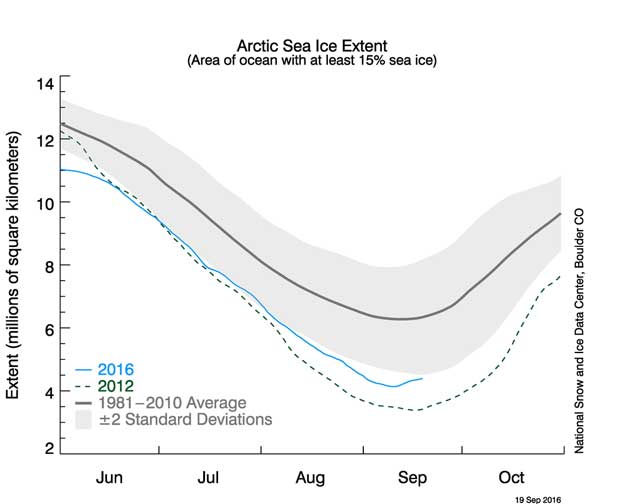 The above diagram says it all really, 2016 was the second lowest on record. It was not and is not a typical year by any measure because globally each and every single month has broken all previous records for that month and so it comes as no great surprise to observe that the Arctic ice melt is well below the average, but not as low as that most astonishing of melt years, 2012. Looking back across each and every year, rather obviously the trend is downwards and fast heading towards an ice free North Pole during the summer season along with the opening of the North West passage.

Is the Northwest passage now open?

The term “Northwest Passage” refers to the route by sea between the North Atlantic up over and around Canada and on into the North Pacific. It is perhaps famous, or should that be infamous, for the many failed attempts to navigate that route. The most famous of the many disasters was the 1845 expedition by Sir John Franklin. (If curious you can read about that here on the Wikipedia page that describes the expedition that vanished and never returned). Actually traversing that route has in the past been done and the first successful passage was completed in 1906 by the Norwegian explorer Roald Amundsen. Others since then followed, but did need fortified ships to break through the ice.

It has not been a commercially viable option, but because of climate change that is now changing. It was first reported on 27th August 2007 that the route was ice free and could be traversed without recourse to an icebreaker. That was the first time this was ever recorded (using records that go back as far as 1972). The following year it opened again on 25th August 2008.

It is of considerable commercial interest because being able to take this route cuts thousands of miles off the alternative.

So where do things stand right now?

NSIDC has access to, and publishes daily sea ice measurements via satellite. They report that right now it really is almost open …

Satellite passive microwave data and images from the Moderate Resolution Imaging Spectroradiometer (MODIS) suggest that the southern Northwest Passage routes are still open. While the passive microwave data show that the Northern Sea route is open, MODIS data reveal a narrow band of scattered sea ice blocking the passage near the Taymyr Peninsula.

So will we one day see cruise ships carrying passengers through the Northwest passage?

Actually yes, because that just happened. This year, for the first time ever by one, the cruise ship Crystal Serenity transited the Northwest passage with 1,700 passengers. The Washington Post reported on that and also that it cost upwards of $22,000 to be just one of those passengers. They advised …

The formerly remote Arctic is now open to summer cruise ships, and you can go along if you’re willing to pay.

Not yet, but it is getting closer and was very close this season.

In the above you can clearly see that the area of broken ice and open water was very close to the North Pole. What Zack also points out is how temperatures are rising each and every year …

Unusually 'warm' year in the #Arctic (through August) and well exceeding previous records (NCEP since at least 1948) pic.twitter.com/biNoXYP0EB

… and so clearly we are indeed marching rapidly down the road towards an ice free pole.

…Changing winds or late-season melt could still reduce the Arctic ice extent, as happened in 2005 and 2010. NSIDC scientists will release a full analysis of the Arctic melt season, and discuss the Antarctic winter sea ice growth, in early October….

… Weather in early September was warm along the Siberian coast (up to 9 degrees Celsius or 16 degrees Fahrenheit above average), with high pressure over the same region and strong winds across the central Arctic. However, as discussed in previous posts, weather over the Arctic Ocean this past summer has been generally stormy, cool, and cloudy—conditions that previous studies have shown to generally limit the rate of summer ice loss. That September ice extent nevertheless fell to second lowest in the satellite record is hence surprising….

Looking back to when such measurements were first calculated (1980), the top ten record breaking years with the lowest extent of sea ice have all been more or less (apart from 2006) the last 10 years.