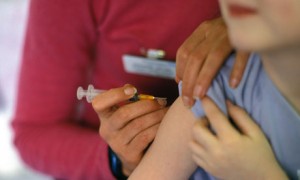 All parents will strive to do what is best for their kids, so when faced with a photograph of a mother cradling her naked baby accompanied by the words: “Vaccines: Know the risks.” it gains some attention. The image is faded out, and then replaced by the Statue of Liberty and “Vaccination. Your Health. Your Family. Your Choice.”, how would any parent react?

The ad links to Mercola and NVIC  websites full of articles blaming common ingredients in vaccines for a number of health problems from breast cancer to infertility. The very seed of doubt is enough to cause any concerned parent to pause and opt not to vaccinate.

The only problem is that it is all an outright lie.

Right now this controversial message is being sold to the American public via a CBS billboard in Times Square and is being paid for and endorsed by the non-profit National Vaccine Information Center (NVIC) and Mercola.com (self-proclaimed World’s Number 1 Natural Health Website).

By skewing the facts and selling the idea that it is a lot riskier that it really is, you sow the seeds of doubt into the minds of many parents. As a result there is now a growing body count of children who are dead due to this nonsense. If you support the anti-vax movement, then you have human blood on your hands.

[Edit: The above paragraph originally claimed zero risks for vaccines, but that is not factually correct, so I’ve fixed it.]

The American Academy of Pediatrics has urged CBS Outdoor to take down this advertisement, because leaving it up creates the risk that more children will die.

Mercola and the NVIC use the ad to endorse their websites, linking the public to what the AAP deems “misinformation” – a barrage of articles blaming common ingredients in vaccines for a number of health problems from breast cancer to infertility.

The NVIC publishes a disclaimer on almost every article, assuring readers that it is not anti-vaccination – despite the fact its spokesperson, Playboy model Jenny McCarthy, has publicly described vaccinations as “a product that’s shit”.

For Mercola, NVIC and McCarthy, thimerosal – a mercury-containing preservative – is Public Enemy Number One. All three insist there has been a direct connection between vaccines containing thimerosal and the increasing number of children being diagnosed with autism.

McCarthy’s own son has the condition, which she blames on the MMR shot he received before his diagnosis. Her bestselling Louder Than Words: A Mother’s Journey in Healing Autism warns parents of the “dangers” involved in vaccinations. NVIC’s website recommends A Shot in the Dark, one of the first books to link vaccines to autism and, in its words, a “classic”.

As a precautionary measure thimerosal has been reduced or eliminated from vaccines in the US and Europe, but in 2010 it was proved that the preservative was not linked to autism and the AAP is keen to defend it.

And of course no article on the anti-vax folks could be complete without a reference to Wakefield (quite rightly, he is a complete rogue) …

Would an ad campaign like this be allowed to run in the UK? It seems unlikely given the recent discrediting of Andrew Wakefield’s research linking the MMR vaccine to autism.

Interestingly, Wakefield continues to work in America, despite being accused of fraud by the BMJ and struck off by the General Medical Council. Having resigned from the NHS for being (in his words) “unpopular”, he set up the Thoughtful House foundation in Texas, which researches autism.

Wakefield’s research continues to be recognised by Thoughtful House and the National Autism Association, despite having been discredited by the AAP and the American Medical Association.

Humm yes, I guess Wakefield was indeed “unpopular” in the NHS, but then writing papers in BMJ journals using faked data in order to discredit the MMR vaccine so that your own individual vaccine can instead be sold at a handsome profit would do that for you.

The only conclusion I can come to here is that in the US it would appear that you can make any outrageous claim, just pay enough and other considerations such as medical ethics or public safety can be ignored. Now that in itself is a real concern.

Oh, I almost forgot, the Guardian article can be found here.

7 thoughts on “Anti-vaccine kooks still at it”