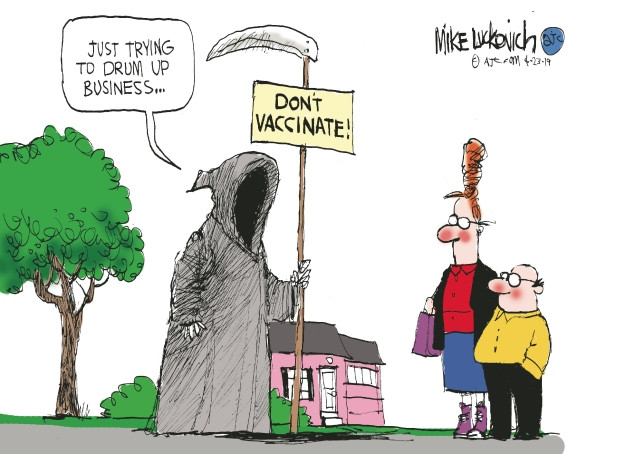 Literally thousands of people have commented under that. The replies are exactly what you might anticipate them to be.

We will come to those further down. First, let’s mull over this briefly.

Why don’t we facilitate this request?

There are several reasons.

The term “Anti-vaxxer” is not simply descriptive, but it is also 100% accurate. The stance is one in which the use of vaccines is specifically being opposed and promoted.

The reasons of such opposition are utterly bogus and fraudulent. There is no scientific basis for opposition to vaccines. The fear-mongering deployed is not “caution” nor is it “concern”, but instead is outright lying.

However there is also one other very big reason for rejecting this request. The Anti-vaxxer stance has resulted in a rapidly growing body count. Literally 100,000s of people died from a very preventable disease last year.

More than 140,000 die from measles as cases surge worldwide

Infants and young children most at risk of fatal complications, health agencies warn

Worldwide more than 140,000 people died from measles in 2018, according to new estimates from the World Health Organization (WHO) and the United States Centers for Diseases Control and Prevention (CDC). These deaths occurred as measles cases surged globally, amidst devastating outbreaks in all regions.

Most deaths were among children under 5 years of age. Babies and very young children are at greatest risk from measles infections, with potential complications including pneumonia and encephalitis (a swelling of the brain), as well as lifelong disability – permanent brain damage, blindness or hearing loss.

Recently published evidence shows that contracting the measles virus can have further long-term health impacts, with the virus damaging the immune system’s memory for months or even years following infection. This ‘immune amnesia’ leaves survivors vulnerable to other potentially deadly diseases, like influenza or severe diarrhoea, by harming the body’s immune defenses.

“The fact that any child dies from a vaccine-preventable disease like measles is frankly an outrage and a collective failure to protect the world’s most vulnerable children,” said Dr Tedros Adhanom Ghebreysus, Director-General of the World Health Organization. “To save lives, we must ensure everyone can benefit from vaccines – which means investing in immunization and quality health care as a right for all.”

Measles is preventable through vaccination. However, vaccination rates globally have stagnated for almost a decade. WHO and UNICEF estimate that 86 per cent of children globally received the first dose of measles vaccine through their country’s routine vaccination services in 2018, and fewer than 70 per cent received the second recommended dose.

Estimating the total number of cases and deaths globally and by region, the report finds that the worst impacts of measles were in sub-Saharan Africa, where many children have persistently missed out on vaccination. In 2018, the most affected countries – the countries with the highest incidence rate of the disease – were Democratic Republic of the Congo (DRC), Liberia, Madagascar, Somalia and Ukraine. These five countries accounted for almost half of all measles cases worldwide.

“We’ve had a safe and effective measles vaccine for over 50 years,” said Dr. Robert Linkins, Branch Chief of Accelerated Disease Control and Vaccine Preventable Disease Surveillance at the CDC and Chair of the Measles & Rubella Initiative. “These estimates remind us that every child, everywhere needs – and deserves – this life-saving vaccine. We must turn this trend around and stop these preventable deaths by improving measles vaccine access and coverage.” While the greatest impacts have been in the poorest countries, some wealthier countries have also been battling measles outbreaks, with significant ramifications for people’s health.

This year, the United States reported its highest number of cases in 25 years, while four countries in Europe – Albania, Czechia, Greece and the United Kingdom – lost their measles elimination status in 2018 following protracted outbreaks of the disease. This happens if measles re-enters a country after it has been declared eliminated, and if transmission is sustained continuously in the country for more than a year

The Measles & Rubella Initiative (M&RI) – which includes the American Red Cross, CDC, UNICEF, the United Nations Foundation and WHO – as well as Gavi, the Vaccine Alliance, are helping countries respond to measles outbreaks, such as through emergency vaccination campaigns.

In addition to rapidly immunizing against measles, outbreak response also includes efforts to reduce the risk of death through timely treatment, especially for related complications like pneumonia. With partners, WHO is therefore providing support to help countries manage cases, including training health workers in effective care for children suffering the effects of the disease. Beyond outbreak response, there is an urgent need for countries and the global health community to continue investing in high quality national immunization programmes and disease surveillance, which helps ensure measles outbreaks are rapidly detected and stopped before lives are lost.

“It is a tragedy that the world is seeing a rapid increase in cases and deaths from a disease that is easily preventable with a vaccine,” said Dr Seth Berkley, CEO of Gavi, the Vaccine Alliance. “While hesitancy and complacency are challenges to overcome, the largest measles outbreaks have hit countries with weak routine immunization and health systems. We must do better at reaching the most vulnerable, and that will be a fundamental focus of Gavi’s next five-year period.” Over the last 18 years, measles vaccination alone is estimated to have saved more than 23 million lives

M&RI is a global partnership founded by the American Red Cross, the CDC, the United Nations Foundation, UNICEF and WHO, that is committed to achieving and maintaining a world without measles, rubella and congenital rubella syndrome. Founded in 2001, the Initiative has helped vaccinate over 2.9 billion children and save over 21 million lives by increasing vaccination coverage, improving disease response, monitoring and evaluation, and building public confidence and demand for immunization.

“We are alarmed at the increase in measles in the US and around the globe—but there is hope,” said Gail McGovern, President & CEO, American Red Cross. “Measles outbreaks are entirely preventable through strong systems that ensure no child misses lifesaving vaccines.”

“The unacceptable number of children killed last year by a wholly preventable disease is proof that measles anywhere is a threat to children everywhere,” said Henrietta Fore, UNICEF’s Executive Director. “When children go unvaccinated in significant numbers, entire communities are at risk. We see that even today in remote places like in the Democratic Republic of the Congo, where measles has killed more than 4,500 children under the age of five so far this year; or in Samoa, where a rapidly spreading measles outbreak has left many children ill and unable to go to school.”

“This latest data show that we are unfortunately backsliding in our progress against an easily-preventable disease: measles,” said Kathy Calvin, President and CEO of the United Nations Foundation. “But we can turn the tide against these outbreaks through collective action, robust political commitment, and closing critical funding gaps. Working together works—it’s the only way we will be able to reach everyone, everywhere with life-saving vaccines and services and, more broadly, reach the UN’s Sustainable Development Goals.”

The responses to the plea from “Crazymothers” to retire the word Anti-vaxxer are exactly what you might envisage them to have been. Here are a few samples …