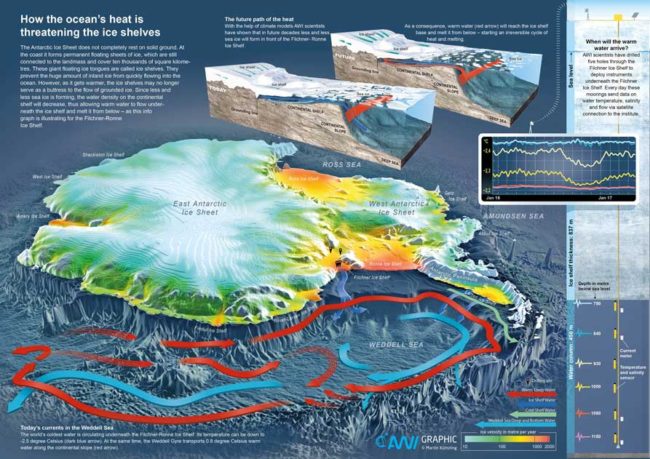 Hartmut Hellmer, Frank Kauker, Ralph Timmermann, and Tore Hattermann Alfred of the Wegener Institute Helmholtz Centre for Polar and Marine Research in Bremerhaven, Germany, have published a new paper that focuses on the potential collapse of an Antarctic ice shelf.

It is entitled “The Fate of the Southern Weddell Sea Continental Shelf in a Warming Climate“, it lays out the details of how and why the Filchner-Ronne Ice Shelf, located in the southern Weddell Sea, will most probably collapse.

In summary: by using simulations they have identified a tipping point which enables warmer ocean water to penetrate the cavity under the ice shelf triggering a meltwater feedback that is Irreversible, and leads to an inevitable collapse of the ice shelf.

Once the reversal of the near-bottom density gradient across the Filchner Trough, together with a rising coastal thermocline, facilitates the direct inflow of the slope current into the trough, warm deep water flushes the ice shelf cavity, causing its warming, enhanced basal mass loss, and a vigorous outflow of glacial meltwater. The latter further freshens the shelf water and thus maintains a density and flow structure at the sill that supports further access of warm water to the ice shelf cavity. The increase in basal melting accelerates the cavity circulation, drawing in even more warm water of open ocean origin—a self-intensifying mechanism. Although the initial trigger for this transition is freshening on the continental shelf as a result of atmosphere–ocean interactions, once the system is in the warm-shelf phase, the only way to stop the inflow of the warm water is to return to twentieth-century atmospheric conditions and to reduce the meltwater input. At first, the latter could be realized by a reduction in the floating portion of the ice sheet. However, the resulting loss of buttressing of the inland ice sheet would accelerate the draining ice streams. The discharge of ice from the relevant catchment basin and a significant contribution to global sea level will be inevitable.

To be clear, they now have a model that strongly suggests this plausible mechanism, and so this becomes a starting point for detailed observations and also the use of higher-resolution models. There are things in play that are simply unknown and these are all factors that might influence how things play out.

What is the shape of the subglacial bedrock topography? Not knowing that makes it tricky to model ice sheet behaviour, and so there is a need for geophysical and glaciological surveys.

Do they have a predicted timescale here?

Actually, yes they do. They model runs suggest that the advance of ocean heat into the Filchner Trough finally happens in the around the year 2070 with sporadic pulses occurring earlier.

Be aware, they do also highlight an appropriate degree and caution here because this all comes from just one climate model.

So how feasible is all this?

In summary … very. The irreversible inflow of warm water under an ice shelf has already been observed in the Amundsen Sea.

As a result of the dramatic melting on its underside, the shelf’s grounding line will shift further south and the ice will gradually lose direct contact with the seafloor. To date, frictional contact with the seafloor has helped to slow down the ice flow. Once this natural brake is gone, the draining of ice from the Antarctic Ice Sheet will quicken …

“The meltwater feedback cycle under the ice shelf will only slow down once the shelf has collapsed, or no more glacial ice flows in from inland to take its place. So we’re talking about processes that will continue over several centuries,”

The researchers’ forecasts are based on the AWI’s BRIOS (Bremerhaven Regional Ice-Ocean Simulations) model, a coupled ice-ocean model that the team forced with atmospheric data from the SRES-A1B climate scenario, created at Britain’s Met Office Hadley Centre in Exeter. The dataset includes e.g. information on the future development of winds and temperatures in the Antarctic, and is based on the assumption that the carbon dioxide concentration in the atmosphere will reach 700 parts per million by the year 2100 …

“our model used climate data that is similar to the IPCC’s (Intergovernmental Panel on Climate Change) current business-as-usual scenario. The results clearly show that even limiting global warming to two degrees Celsius won’t be enough to save the Filchner-Ronne Ice Shelf,”

In addition, the authors believe the predicted changes in the Weddell Sea offer a new perspective on current developments in the Amundsen Sea.

“When it comes to the Amundsen Sea, where warm water has already reached the continental shelf and even the grounding line of some ice shelves, we can safely say that this inflow of heat cannot be stopped; the climate regime change has already taken place. In other words, the losses of mass of the West Antarctic Ice Sheet will intensify – just like the models predict.”

To measure the forecasted inflow of warm water under the Filchner-Ronne Ice Shelf, in the past two Antarctic summers scientists from the Alfred Wegener Institute and the British Antarctic Survey drilled through the ice at seven sites to deploy oceanographic recording devices below it. Thanks to their efforts, every night fresh data on the water temperature, salinity, flow speed and flow direction is transmitted to the AWI facilities in Bremerhaven via satellite.

“However, it will take a few years before we can use this latest data to reliably document the changes,”