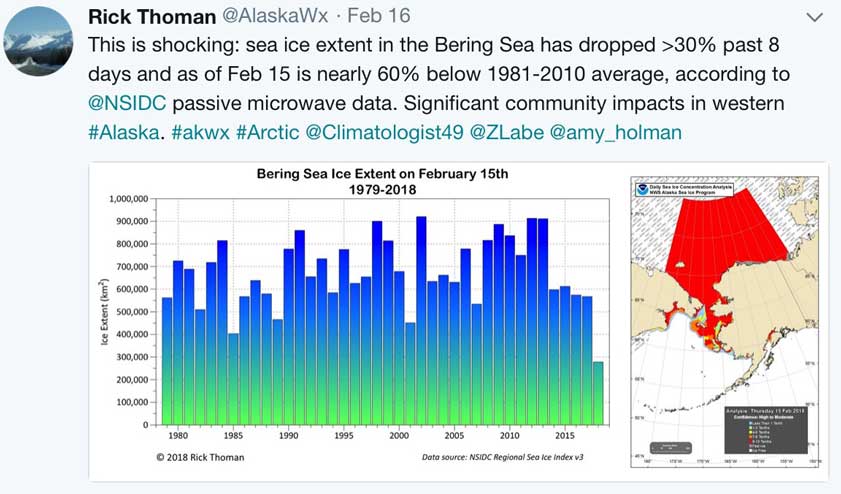 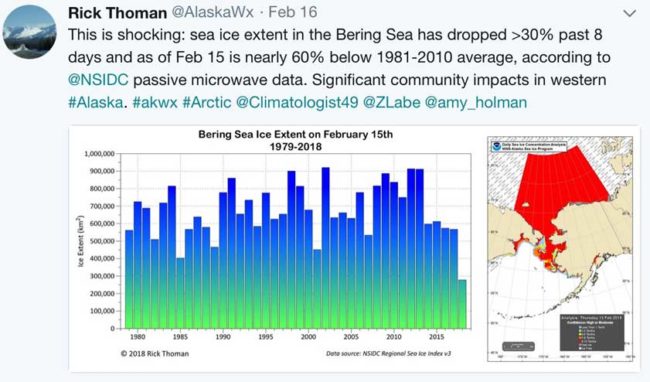 There has been a sudden and very dramatic loss of sea ice in the Bering sea. Within an 8 day period one third of the sea ice has gone.

It’s not spring, we are in the middle of February.

So what exactly has happened?

Weather (e.g., wind) has a significant role in wintertime variability of sea ice in the Bering Sea, however, this is still quite noteworthy… pic.twitter.com/Jba95LjURQ

People live in the Arctic. Losses of sea ice, record high temperatures, etc. have real impacts to these coastal communities (such as along the Bering Sea). We need more of these stories. pic.twitter.com/1aNV78pa5X

… and here is why it happened …

Poleward excessive moisture and heat transport occurring through the Bering Strait – associated with a powerful cyclone east of the Kamchatka Peninsula. Temperatures more than 20°C above average in the region.

Yikes… craziness. Upcoming weather pattern favorable for excessive "warmth" (relative to average) advecting in from both Atlantic/Pacific sides of the #Arctic – some of the largest projected anomalies I've seen in the region since Fall 2016.

Who is reporting this?

Right now, this is not mainstream news.

So far Inside Climate News has the story and has published the details.

Globally, sea ice is at record lows as the polar regions warm faster than the rest of the planet. Along the Alaska coast, it’s affecting people’s lives.

At a time when the sea ice should be growing toward its maximum extent for the year, it’s shrinking instead—the area of the Bering Sea covered by ice is now 60 percent below its average from 1981-2010.

“[Bering sea ice] is in a league by itself at this point,” said Richard Thoman, the climate science and services manager for the National Weather Service Alaska region. “And looking at the weather over the next week, this value isn’t going to go up significantly. It’s going to go down.”

But it is far away and does not impact us … right?

Cooling in the Artic helps to regulate global weather patterns. In other words, unlike Vegas, what happens in the Arctic does not stay in just the Arctic.

NSIDC are the subject matter experts who track what is happening in both the Arctic and also the Antarctic via satellite data on a daily basis. Their latest Arctic Sea-Ice chart illustrates that sea ice in the Arctic as a whole is declining at a time when it should still be climbing towards its seasonal maximum … 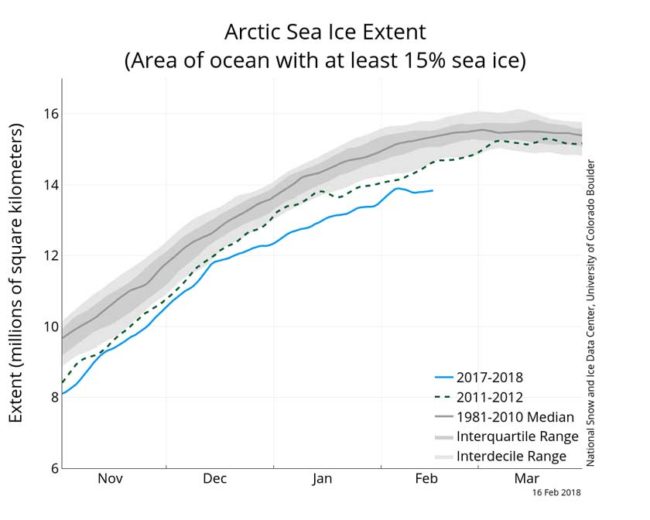 Mark Serreze, the director of the National Snow and Ice Data Center, has commented on this …

“It used to be just the summer when the ice was breaking low records, but we’re starting to see winter really get into the act now, Both the atmosphere and the ocean are really conspiring to keep sea ice levels down.”

“Looking at the weather over the next week, this value isn’t going to go up significantly. It’s going to go down.”

“As a scientist, it’s really shocking to see some of this and try to wrap your mind around what’s happening and the pace that it’s happening.”