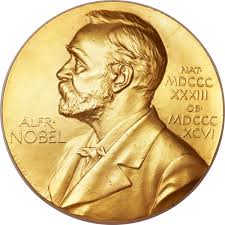 It is once again the time of year when the Nobel Prizes are awarded, and so each day this week we will be hearing about an award for one specific category. The roadmap is as follows:

It was all started back in 1895 when the will of the Swedish inventor Alfred Nobel established the prizes. Well, OK, not quite 1895, because the prizes in Physics, Chemistry,Physiology or Medicine, Literature, and Peace were only first awarded in 1901.

What is not so well known is who actually gets to decide.

So who won today?

Well, here are the details directly from the Nobel Prize Committee themselves …

The 2013 Nobel Prize in Physiology or Medicine

for their discoveries of machinery regulating vesicle traffic,
a major transport system in our cells

The 2013 Nobel Prize honours three scientists who have solved the mystery of how the cell organizes its transport system. Each cell is a factory that produces and exports molecules. For instance, insulin is manufactured and released into the blood and chemical signals called neurotransmitters are sent from one nerve cell to another. These molecules are transported around the cell in small packages called vesicles. The three Nobel Laureates have discovered the molecular principles that govern how this cargo is delivered to the right place at the right time in the cell.

Randy Schekman discovered a set of genes that were required for vesicle traffic. James Rothman  unravelled protein machinery that allows vesicles to fuse with their targets to permit transfer of cargo. Thomas Südhof revealed how signals instruct vesicles to release their cargo with precision.

Through their discoveries, Rothman, Schekman and Südhof have revealed the exquisitely precise control system for the transport and delivery of cellular cargo. Disturbances in this system have deleterious effects and contribute to conditions such as neurological diseases, diabetes, and immunological disorders. 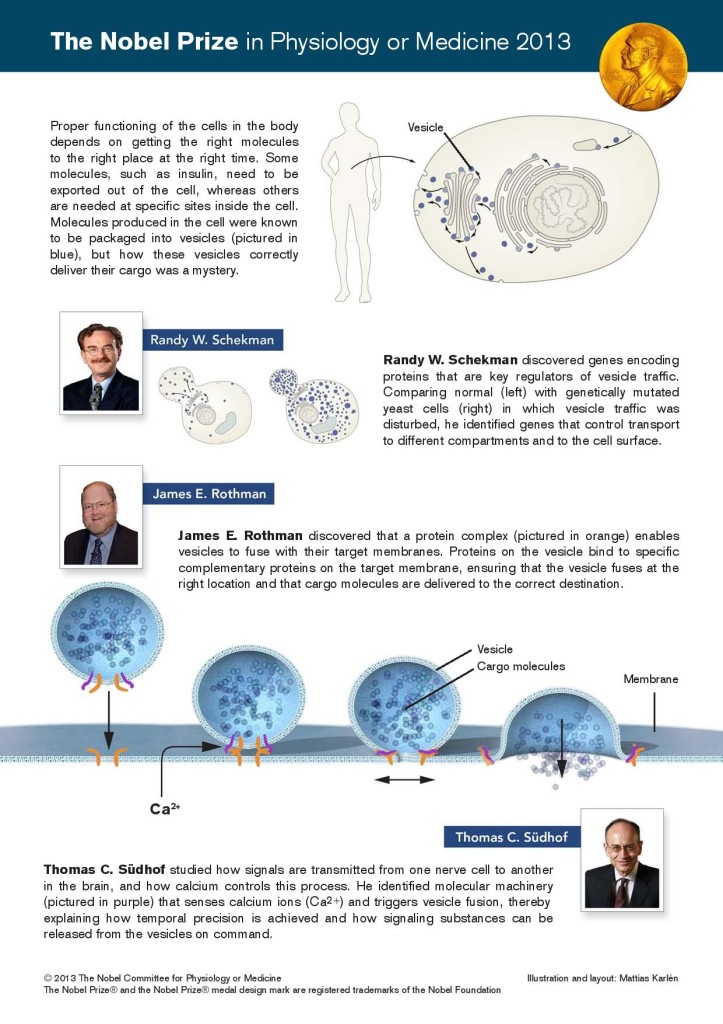 How cargo is transported in the cell

In a large and busy port, systems are required to ensure that the correct cargo is shipped to the correct destination at the right time. The cell, with its different compartments called organelles, faces a similar problem: cells produce molecules such as hormones, neurotransmitters, cytokines and enzymes that have to be delivered to other places inside the cell, or exported out of the cell, at exactly the right moment. Timing and location are everything. Miniature bubble-like vesicles, surrounded by membranes, shuttle the cargo between organelles or fuse with the outer membrane of the cell and release their cargo to the outside. This is of major importance, as it triggers nerve activation in the case of transmitter substances, or controls metabolism in the case of hormones. How do these vesicles know where and when to deliver their cargo?

Randy Schekman was fascinated by how the cell organizes its transport system and in the 1970s decided to study its genetic basis by using yeast as a model system. In a genetic screen, he identified yeast cells with defective transport machinery, giving rise to a situation resembling a poorly planned public transport system. Vesicles piled up in certain parts of the cell. He found that the cause of this congestion was genetic and went on to identify the mutated genes. Schekman identified three classes of genes that control different facets of the cell´s transport system, thereby providing new insights into the tightly regulated machinery that mediates vesicle transport in the cell.

James Rothman was also intrigued by the nature of the cell´s transport system. When studying vesicle transport in mammalian cells in the 1980s and 1990s, Rothman discovered that a protein complex enables vesicles to dock and fuse with their target membranes. In the fusion process, proteins on the vesicles and target membranes bind to each other like the two sides of a zipper. The fact that there are many such proteins and that they bind only in specific combinations ensures that cargo is delivered to a precise location. The same principle operates inside the cell and when a vesicle binds to the cell´s outer membrane to release its contents.

It turned out that some of the genes Schekman had discovered in yeast coded for proteins corresponding to those Rothman identified in mammals, revealing an ancient evolutionary origin of the transport system. Collectively, they mapped critical components of the cell´s transport machinery.

Thomas Südhof was interested in how nerve cells communicate with one another in the brain. The signalling molecules, neurotransmitters, are released from vesicles that fuse with the outer membrane of nerve cells by using the machinery discovered by Rothman and Schekman. But these vesicles are only allowed to release their contents when the nerve cell signals to its neighbours. How is this release controlled in such a precise manner? Calcium ions were known to be involved in this process and in the 1990s, Südhof searched for calcium sensitive proteins in nerve cells. He identified molecular machinery that responds to an influx of calcium ions and directs neighbour proteins rapidly to bind vesicles to the outer membrane of the nerve cell. The zipper opens up and signal substances are released. Südhof´s discovery explained how temporal precision is achieved and how vesicles´ contents can be released on command.

The three Nobel Laureates have discovered a fundamental process in cell physiology. These discoveries have had a major impact on our understanding of how cargo is delivered with timing and precision within and outside the cell.  Vesicle transport and fusion operate, with the same general principles, in organisms as different as yeast and man. The system is critical for a variety of physiological processes in which vesicle fusion must be controlled, ranging from signalling in the brain to release of hormones and immune cytokines. Defective vesicle transport occurs in a variety of diseases including a number of neurological and immunological disorders, as well as in diabetes. Without this wonderfully precise organization, the cell would lapse into chaos.

James E. Rothman was born 1950 in Haverhill, Massachusetts, USA. He received his PhD from Harvard Medical School in 1976, was a postdoctoral fellow at Massachusetts Institute of Technology, and moved in 1978 to Stanford University in California, where he started his research on the vesicles of the cell. Rothman has also worked at Princeton University, Memorial Sloan-Kettering Cancer Institute and Columbia University. In 2008, he joined the faculty of Yale University in New Haven, Connecticut, USA, where he is currently Professor and Chairman in the Department of Cell Biology.

Randy W. Schekman was born 1948 in St Paul, Minnesota, USA, studied at the University of California in Los Angeles and at Stanford University, where he obtained his PhD in 1974 under the supervision of Arthur Kornberg (Nobel Prize 1959) and in the same department that Rothman joined a few years later. In 1976, Schekman joined the faculty of the University of California at Berkeley, where he is currently Professor in the Department of Molecular and Cell biology. Schekman is also an investigator of Howard Hughes Medical Institute.

Thomas C. Südhof was born in 1955 in Göttingen, Germany. He studied at the Georg-August-Universität in Göttingen, where he received an MD in 1982 and a Doctorate in neurochemistry the same year. In 1983, he moved to the University of Texas Southwestern Medical Center in Dallas, Texas, USA, as a postdoctoral fellow with Michael Brown and Joseph Goldstein (who shared the 1985 Nobel Prize in Physiology or Medicine). Südhof became an investigator of Howard Hughes Medical Institute in 1991 and was appointed Professor of Molecular and Cellular Physiology at Stanford University in 2008.

So next up is Physics, who will win?

If I was to place a bet, I’d be putting my money on Higgs. Ah but that will be a bit tricky, you see the maximum number that can share is three, but at least six physicists wrote out the theory in 1964 – Oh dear … well let’s see what happens, not long to wait now.

I suspect it will be François Englert, who published the idea first, and Peter Higgs, who was second that will most probably win. No doubt that will leave Gerald Guralnik, Carl Richard Hagen and Tom Kibble, who developed the theory separately and published just a month later a bit ticked off. Then again what about the 6,000 scientists on the Atlas and CMS collaborations at CERN, the particle physics laboratory near Geneva, where they slogged away for years to actually verify it all, will there be a prize for them?

They could in fact  go for a three way split … Englert, Higgs and CERN. You know what, if it was my decision I would go for that, it feels right.