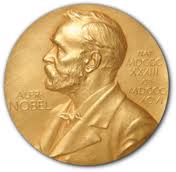 Today we have the announcement of the Chemistry Nobel Prize, and yes I’m more of a physics fan so perhaps yesterday was my own personal highlight. Now, before we get to the details, first a quick side tour. Grrlscientist’s Guardian Column has a nice little article on Nobel Prize Quackpottery within which she highlights some of the truly wacky things that previous Nobel Prize winners have embraced, and today …

Josephson began flirting with pseudoscientific quackpottery even before his Nobel Prize award. According to Josephson, he was just one year into his postdoctoral work at the University of Illinois in the mid-1960s when he ventured out of the lab to attend a conference in Toronto. Whilst there, he had the mind-bending experience of witnessing self-proclaimed psychic healer and poltergeist chaser, Matthew Manning, demonstrate paranormal spoon bending. In these crucial moments, Josephson’s scientific career trajectory changed forever …

Sigh! … so yes indeed, being smart enough to win a Nobel Prize does not in any way inoculate you from being daft enough to embrace some truly weird quackery, but then that is the price you pay if you abandon rationality and the scientific method. The key takeaway, something is only true if there is evidence to back it up. In the absence of evidence, even an endorsement by a Nobel laureate is insufficient, so don’t be fooled by opinion alone, remain skeptical of any claim that has no evidence.

Anyway, on with the proceedings. Who has won the Chemistry Prize?

“for studies of G-protein–coupled receptors”

And what did they win it for?

Your body is a fine-tuned system of interactions between billions of cells. Each cell has tiny receptors that enable it to sense its environment, so it can adapt to new situtations. Robert Lefkowitz and Brian Kobilka are awarded the 2012 Nobel Prize in Chemistry for groundbreaking discoveries that reveal the inner workings of an important family of such receptors: G-protein–coupled receptors.

For a long time, it remained a mystery how cells could sense their environment. Scientists knew that hormones such as adrenalin had powerful effects: increasing blood pressure and making the heart beat faster. They suspected that cell surfaces contained some kind of recipient for hormones. But what these receptors actually consisted of and how they worked remained obscured for most of the 20th Century.

Lefkowitz started to use radioactivity in 1968 in order to trace cells’ receptors. He attached an iodine isotope to various hormones, and thanks to the radiation, he managed to unveil several receptors, among those a receptor for adrenalin: β-adrenergic receptor. His team of researchers extracted the receptor from its hiding place in the cell wall and gained an initial understanding of how it works.

The team achieved its next big step during the 1980s. The newly recruited Kobilka accepted the challenge to isolate the gene that codes for the β-adrenergic receptor from the gigantic human genome. His creative approach allowed him to attain his goal. When the researchers analyzed the gene, they discovered that the receptor was similar to one in the eye that captures light. They realized that there is a whole family of receptors that look alike and function in the same manner.

The studies by Lefkowitz and Kobilka are crucial for understanding how G-protein–coupled receptors function. Furthermore, in 2011, Kobilka achieved another break-through; he and his research team captured an image of the β-adrenergic receptor at the exact moment that it is activated by a hormone and sends a signal into the cell. This image is a molecular masterpiece – the result of decades of research. 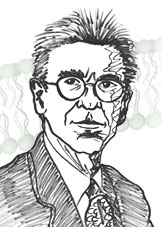 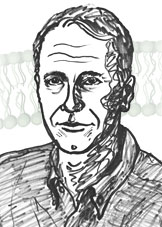 Yes indeed, well deserved, and many congratulations to them.