We have lies, dammed lies, then going to the next level up on that scale and pushing it to the limit, we have Trump.

NPR took a look at his letter of rebuke to the WHO. The content of that earns him the crown of “Wingnut of the week”. You can scroll to the bottom for details. To be honest, when it comes to Wingnuttery, he is a pro and makes many other contenders look like amateurs. In the middle of a pandemic he decided that it was a good idea to attack and defund the World Health Organization, the one international body striving to tackle the threat like no other.

Let’s take a look at what else has been happening this past week amongst the wingnut community..

It is all very much everything you might expect and a lot more. Here are some of the highlights …

Wingnut Coronavirus Claims – Utterly clueless and proud of that

Anti-choice activists are lashing out at a forthcoming documentary in which Norma McCorvey (aka “Jane Roe”) reportedly confesses that her transformation into a born-against Christian and anti-abortion activist was “all an act.”

As always, it is an endless stream. Some of it is good, some sad, some is rather grim, and some is quite frankly hilarious. Here are a few more samples …

There are also good people out there …

Wingnut of the week – Trump

What gets him the title this week is his absurd letter of rebuke to the WHO (World Health Organization).

NPR takes it apart line by line and fact-checks it.

So this is the letter … 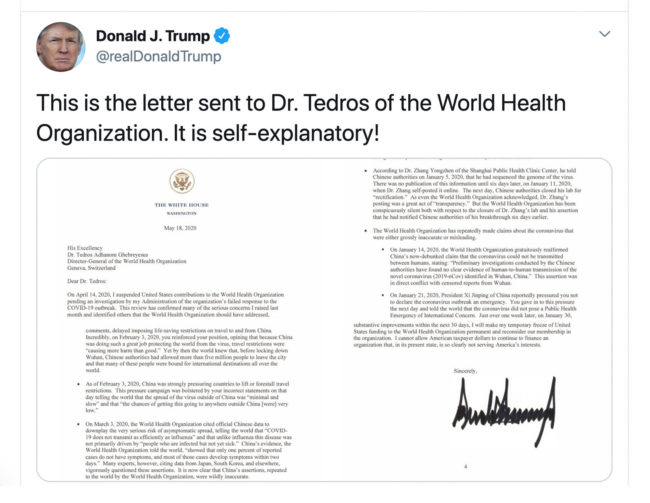 “I found the letter full of unsubstantiated interpretations of certain events,” said Kelley Lee, a global health professor at Simon Fraser University. A U.S. withdrawal from WHO would seriously compromise efforts to unite and provide proper funding for a global response in a “profoundly important moment,” Lee said.

NPR also tapped into subject matter experts and proceeded to pull it all apart.

blaming WHO for China’s reporting delays and sample hoarding is misdirected. Of these charges by Trump, he said: “They’re valid critiques of China but not the World Health Organization.

WHO Ignored reports of the Virus spreading

The Lancet, a respected medical journal, said: “This statement is factually incorrect.”

WHO has repeatedly said this assertion is false. Taiwan’s health authorities also saidthey did not officially report to WHO that human-to-human transmission was happening by Dec. 31.

“On January 28, 2020, after meeting with President Xi [Jinping] in Beijing, [Tedros] praised the Chinese government for its ‘transparency’ with respect to the coronavirus, announcing that China had set a ‘new standard for outbreak control’ and ‘bought the world time.’ You did not mention that China had, by then, silenced or punished several doctors for speaking out about the virus and restricted Chinese institutions from publishing information about it.”

The World Health Organization did praise China at that point. “The United States was equally praising China at the time,” Georgetown Law’s Gostin pointed out.

On Jan. 24, Trump tweeted: “China has been working very hard to contain the Coronavirus. The United States greatly appreciates their efforts and transparency. It will all work out well. In particular, on behalf of the American People, I want to thank President Xi!”

“The only way forward for the World Health Organization is if it can actually demonstrate independence from China. My Administration has already started discussions with you on how to reform the organization. But action is needed quickly.”

This demand comes with no specifics, global health observers said. “What exactly does the Trump administration want WHO to do?” Simon Fraser’s Lee asked. It’s not clear what “action” the U.S. is asking for, or how WHO could demonstrate “independence from China,” because no solutions are outlined in the letter.

As for the threat of U.S. withdrawal, Gostin said he thinks the U.S. is unlikely to follow through with leaving WHO, because he does not believe Congress would approve such a move.

The Key criticism of Trumps letter is the complete and utter insanity of attacking and defunding the WHO in the middle of a global pandemic, and using many many false claims for doing so …

“For the United States to blame the World Health Organization for its own months and months and months of inaction seems factually untrue and designed to divide the world at a moment when global solidarity is needed most,” Meier said. “It undercuts the World Health Organization’s efforts to provide a collective response to this common threat [of the COVID-19 pandemic].”

The rather obvious is that this is simply a move to distract from his own complete and utter incompetence and inaction.