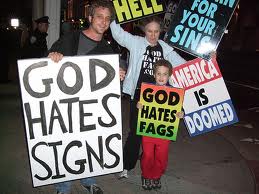 Just when you think they could not get any whacker, up they pop to prove you wrong.

Westboro have posted a press release to their website (click here for a PDF of the actual press release) announcing plans to picket the funerals of those who lost their lives when Anders Breivik set off a bomb in Oslo that killed eight and then traveled to the island of Utoya to execute 69 at a youth camp. Its the usual yada-yada insanity that we all expect from them these days, I need not repeat what we are all so familiar with already (if you are indeed not familiar then lets just say that they are so extreme, they make all other kooks look quite acceptable)

And you know what … I fully support their latest proposed venture, its a fantastic idea. Why? Well because Norway has laws banning hate speech, so while the US might ignore them and consider all their rants to be a 1st amendment freedom, the penal code in Norway says something quite different – section 121 specifically says:

Any person who wilfully or through gross negligence publicly utters a discriminatory or hateful expression shall be liable to fines or imprisonment for a term not exceeding three years.

So would the kind folks in Norway do us all a favor and lock them up? You bet they would. In a story about the church’s plan, the Norwegian Broadcasting Corporation (NRK) got a quote from Oslo Police Chief of Staff Johan Fredriksen.

If they implement what they threaten, I can only confirm that it is one of the most bad ideas at the moment.

Now for the bad news, before you all rush out to offer funds for air-fares to fly them all out there, I need to advise that their chance of being granted a visa is rather slim

If I believed in prayer I’d be frantically praying right now that they get their visas, and also advising them that they would only require one-way tickets.