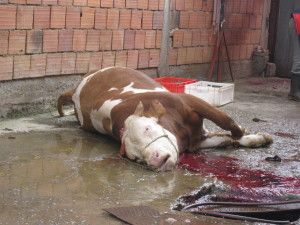 The context here is that Britain’s top vet, John Blackwell, has called for a ban on slashing animals’ throats in ‘ritual’ slaughters for halal and kosher meat products. He is quoted as saying …

“The Danish unilateral banning [was done] purely for animal welfare reasons, which is right.”

“We may well have to go down that route.”

Mr Blackwell said the way halal and kosher meat is created, through the throat being slit, resulted in “five or six seconds” of pain for the animal.”

“They will feel the cut,” he said.

“They will feel the massive injury of the tissues of the neck. They will perceive the aspiration of blood they will breathe in before they lose consciousness.”

This is of course all about animal welfare vs religious rituals and at the heart of this is the belief that you should only eat meat taken from an animal that has had its throat slit and blood drained while it is fully conscious, and so all he is really suggesting here is that the animal should first be stunned because that is far more humane and less traumatic to the animal. If it happened here in the UK then it would not be a world first because last month the Danish government introduced a ban on the religious slaughter of animals for the production of halal and kosher meat, after years of campaigning from welfare activists.

So what will actually happen if there was such a ban? In Islam the Quran itself does in fact state that if there is absolutely no other halal food available and the Muslim is forced by necessity, then a Muslim is allowed to eat non-halal. (2:173). As for Kosher, the vast majority of the Jewish community do not actually maintain a completely kosher diet at all.

So anyway, all that is the background context here, and so into this debate leaps Cristina Odone with a contribution in which she claims in a UK Telegraph article …

Britain is set to become a country that prizes a cow more than a Jew, an ox more than a Muslim. If John Blackwell, soon to be head of Britain’s vets, gets his wish, ritual slaughter will be banned. Blackwell, you see, is worried about the pain that animals might feel if they are not stunned before they are butchered. He is not worried though about the millions of Muslims and Jews whose religion dictates that they eat only animals that have been killed in a particular way. Let them eat cake.

Er no, this is not about prizing a cow more than a Jew or an ox more than a Muslim, that assertion is quite frankly complete and utter lunacy. The proposal is simply the rather obvious – holding a belief that meat should not be consumed unless the animal has been brutally slaughtered by having it throat cut while fully conscious and then die slowly as the blood drains does not in any way trump the more humane approach of first stunning the animal.

Kosher and Halal meat is not in any way healthier or more hygienic, there is no evidence for that, this is simply an ancient middle-east superstitious practise that persists and is now well past its sell-by date.

People should of course be free to believe whatever they wish to believe, but in reality such beliefs tend not to be binary black and white thinking, because most who retain religious beliefs will hold different aspects of their belief with different degrees of confidence. As an example the actual consumption of Kosher is not fully followed by most Jewish people, and as for Halal, if the choice was removed, it is not in any way a problem in the eyes of Allah. So why all the fuss?

It is perhaps a very human aspect of our nature that there will always be people around who remain “ready to be offended” at the smallest whiff of a suggestion that the embrace of ancient superstitious thinking is not rational, and so that “ready to be offended” mode can then kick into a higher gear if is is suggested that the specific aspects of such superstitions that cause real measurable harm should be banned.

So no this is not about prizing an ox more than a Muslim, but rather is about a moral choice between continuing to permit an ancient superstition to carry on, or to perhaps give serious consideration to stopping an abhorrent practise that creates a great deal of prolonged pointless suffering to an animal.

Personally I feel that adherence to an ancient superstition for no rational reason should not be permitted to trump a well-reasoned evidence-based argument in favour of animal welfare.