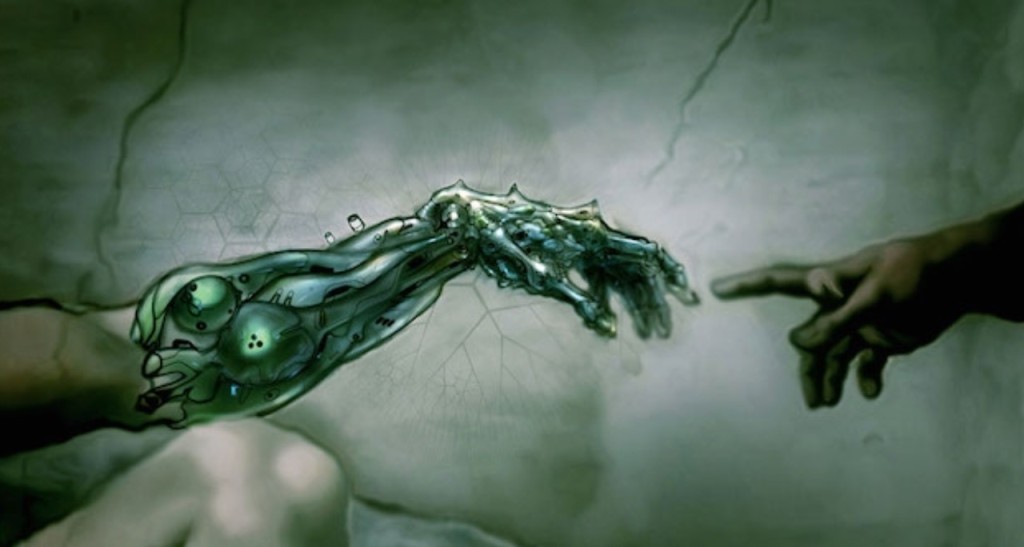 Christianity is something I need not explain because we are all familiar with the buzzwords, Jesus, Eternal life, etc… ah but what about the word, “Transhumanism”, what does that mean to you? Well that is defined as …

an international cultural and intellectual movement with an eventual goal of fundamentally transforming the human condition by developing and making widely available technologies to greatly enhance human intellectual, physical, and psychological capacities

… and it is perhaps best known for the idea of the potential emergence of machine intelligences that are smarter than we are, and also for the potential for human consciousness being uploaded into a machine so that we live on in a new way. The ideas are of course pure science-fiction today, and so an appropriate amount of criticism is deployed. For example the idea that there will soon be a singularity (a time when machine intelligence will emerge and surpass us) often faces (quite rightly) criticism from many who point out that human consciousness is not something we understand (yet), and so the idea that we are about to see the emergence of self-aware machines is not something that is viable. (See here for criticism of that).

OK, so we have in essence two beliefs, one is a traditional religious one and the other is a technology based one, and so it should come as no surprise to find that a blending of both is starting to emerge …

A lot of people think of Christianity as a backwards-looking religion, obsessed with protesting gays, being judgmental, and imposing its rules on everyone else. That doesn’t sound like a group of people ready to embrace the cutting edge of technology or culture—but Christianity has reinvented itself many times in the past, and when it does, it often ends up profoundly forward-looking and progressive.

I believe that this reinvention is happening now, and what is emerging is a new class of Christian transhumanists and singularitarians with radically disruptive views on the future.

Well yes, I get it in some ways, if your current set of myths need an upgrade because they are well beyond their sell-by-date, then it is perhaps not such a surprise to see a reboot emerge that re-introduces a variation of religious mythology for the technological age.

Beliefs do adapt and modify themselves, and of course the classic example of that is the reformation. That arose as the religious response to the greatly increased flow of information via the printing press, and so we should perhaps anticipate something similar happening in our new information age.

It does appears to be a movement, but to be honest at this stage is perhaps only a fringe movement – this is not a Martin Luther moment.

So what will come next?

In reality lots of different flavours and variations of belief will arise, they always have, and so as before, those that deliver a distinct survival advantage for the belief will persist and thrive and those that do not will simply fade into oblivion.

The emergence of Christian Transhumanism is just one small example of this natural splintering and re-blending of belief and is now ready on the stage to be naturally selected or deselected. In the years to come no doubt even weirder candidates will pop up.