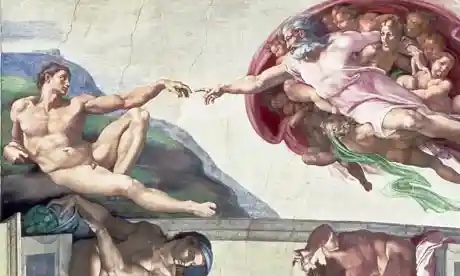 Generally when I trip over some theist arguments I tend to roll my eyes and move on. Today however I came across something so deeply strange that it merits a bit of attention. The right-wing Creationist organization called the Discovery Institute has a small blog named “Evolution News”. There we find a posting titled “God Hypothesis Versus Atheist Science Denial“.

It is actually a rehash of an article by somebody else, so it is not in any way original thinking. Paint me unsurprised.

It is, I assume, supposedly their very best most robust scientific evidence for God. Let’s look at the three items they present.

The existence of a moment of beginning of our universe in an almost incomprehensibly massive burst of light and energy is astonishingly consistent with beliefs about the creation of the universe from the Jewish, Christian, and Islamic traditions.

I’ll not rattle through all the details least your eyes begin to glaze over, but some of it should be highlighted. Beyond not actually grasping what the Big Bang actually is … burst of light … seriously no. Creation of the universe … again seriously no. It is simply a model that describes the expansion of the early universe from a singularity.

The claim being offered is that this aligns with ancient creation myths, hence it is “evidence” that the God of his specific variation of belief did it. The huge challenge to that is that if you dig into these ancient creation myths they do not in any way align with this cosmological model.

Beyond being completely wrong, it is not in any way a match for the Big Bang expansion of the early universe.

Dr. Meyer also discusses the remarkable fine-tuning of the physical constants in the universe that is necessary for the existence of life. If any of these physical values were even slightly different, mankind would not have appeared. It is as if Someone were expecting us and rigged the physics of the universe to make sure we were created.

This claim very much reminds me of the Douglas Adams puddle …

“This is rather as if you imagine a puddle waking up one morning and thinking, ‘This is an interesting world I find myself in — an interesting hole I find myself in — fits me rather neatly, doesn’t it? In fact it fits me staggeringly well, must have been made to have me in it!’ This is such a powerful idea that as the sun rises in the sky and the air heats up and as, gradually, the puddle gets smaller and smaller, frantically hanging on to the notion that everything’s going to be alright, because this world was meant to have him in it, was built to have him in it; so the moment he disappears catches him rather by surprise. I think this may be something we need to be on the watch out for.”

Douglas Adams, The Salmon of Doubt

The genetic code is quite analogous to a computer code and even to a language — it has punctuation, for example. It is a blueprint for life, and every blueprint presupposes a designer.

Was our DNA compiled using COBOL, Fortran, or is it written in Python perhaps.

Clearly this is daft.

DNA is not the same as a set of instructions for a computer, this assertion is deeply misleading. There is a vast creationist industry that sells the idea that God is the author of the “code” in our DNA, and so this is promoted as “proof” or “Evidence” for a God.

The concept of a gene as “information” is a metaphor. It suggests that genes are there by design and have a specific intent, hence there must be an author. On the basis of no evidence at all the idea that it emerged naturally over billions of years is dismissed and instead the idea that a supernatural entity created it magically as you now find it is promoted.

What exactly is a Hypothesis?

This is really where I’m going with all of this.

You have an observation. You can’t explain this observation using any existing scientific theory so you propose a hypothesis to explain it. The one key attribute of a hypothesis is that you need to be able to test it and falsify it.

Via the Discovery Institute we have what they term to be a “God Hypothesis” that is being presented to supposedly explain things … what caused the Big Bang, why is the universe the way it is, and gosh how is it possible for our DNA to be really so complex?

Questions for them to consider.

The answer is that you can’t, it is unfalsifiable, and so it is not valid scientific hypothesis.

I honestly don’t anticipate anybody who embraces their “God Hypothesis” as “truth” to hit pause and seriously rethink things. This is because, as is often observed, you can’t reason people out of things that they have not reasoned themselves into.

The Distilled essence of it all

The essence of it all is this. There are things we do know and there is a boundary to our understanding and knowledge. It is inevitable that those that believe in a God for emotional and cultural reasons will point beyond that boundary out into the unknown and claim “God did it” as the solution to such mysteries.

This is simply comfort thinking and is not in any way scientific or “evidence” based.

What we do truly know by looking back is that every time we were faced with deep mysterious unknown things being tagged with the “A God did it” label, it has later been discovered to be wholly and completely natural and that nothing has even been explained by anything supernatural.

This latest supposed “God hypothesis” fails and that is really no surprise because it has always failed through all of human history without exception.

Don’t let those that believe fool you with a supposed “God Hypothesis” by supposedly dressing religion up with sciency sounding terms.

It might be claimed to be the finest of silk, but the real truth is that this emperor is still butt naked.