This one leaves me with almost no words. 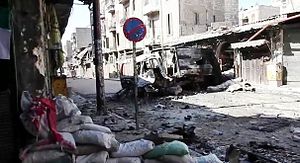 Mohammad Qataa was a 15 year old teen who worked as a street vendor selling coffee in the working-class Shaar neighbourhood. Witnesses report that he was seen arguing with someone and was overheard saying: “Even if the Prophet Mohammad comes down (from heaven), I will not become a believer.“. What happens next is everything you might expect when clueless religious gobshites hold power, as reported by ABC …

The observatory [a British-based human right group opposed to the Syrian regime] says the Islamists took Qatta on Saturday and brought him back alive in the early hours of Sunday, with whiplash marks visible on his body.

“People gathered around him and a member of the fighting brigade said: ‘Generous citizens of Aleppo, disbelieving in God is polytheism and cursing the prophet is a polytheism. Whoever curses even once will be punished like this’,” the observatory said.

“He then fired two bullets from an automatic rifle in view of the crowd and in front of the boy’s mother and father, and got into a car and left.”

Mr Abdulrahman says the boy’s mother had pleaded with the killers, whose Arabic suggested they might not be Syrian, not to shoot her son.

Al Jazerra also report the story here. Apparently what was going on here was that one of his customers was trying to get a free coffee and the boy responded “Even if Muhammad comes down, I will not give it as debt.” This was then misinterpreted by some foreign fighters who took it for blasphemy.

This is just one small glimpse of a far bigger tragedy. On one side we have the Assad dictatorship who have the backing of thugs such as the Shabiha and Hezbollah. On the other side we have The Free Syrian Army in bed with thugs such as Jabhat al-Nusra (violent, aggressive, and into suicide bombing in a big way), and caught in the middle are millions of innocent people who would rather have nothing to do with any of this.

To make matters even worse, we have:

Whoever wins, or however they win, this is a bloody (quite literally) mess, because this civil war has now escalated and expanded into an international war … by proxy.

So where are your sympathies anchored, with the brutal Assad dictatorship? I suspect not, the list of human rights violations is well-known, and should they win that gives religious thugs like Hezbollah, and Iran a safe haven. How about with the opposition? Once again, while the desire for freedom is something we might indeed align with, you need to remember that this then gives violent religious thugs like Jabhat al-Nusra a safe haven, and remember these are the guys that just executed an innocent 15 year old teen for blasphemy.

So what should we push for?

There needs to be a concerted international effort for all external parties to back away from this war by proxy. The alternatives, such as even further escalation or the triumph of one of the many gangs of religious thugs is unthinkable, and yet sadly the unthinkable is also the most probable outcome here.

Mohammad Qataa was 15 and was just one of the many victims here, but there is an almost countless number of others. I find that thinking about large numbers is impersonal and decouples us from the brutality of it all, but thinking about just one helps to put this insanity in perspective and also brings out our natural human empathy for those caught in the middle. It is not the various factions that need assistance, but rather those caught between them all that truly need our help.