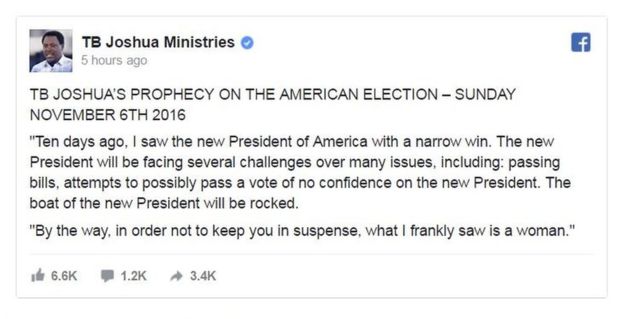 TB Joshua, the Nigeria TV Evangelist, is rather influential and popular. He has over 2.5 million Facebook followers and 500,000 subscribers to his YouTube channel where he has managed to rack up 300 million views, so clearly a few are paying attention to his  message.

He recently claimed that God had told him that Hillary Clinton would win the 2016 US election. That picture above is from a now deleted post on his Facebook page, but if even then you think that this is just the Devil playing tricks, there here he is on Nov 6th actually laying it all out on YouTube …

Ten days ago, I saw the new President of America with a narrow win. The new President will be facing several challenges over many issues, including: passing bills, [ like ever other president in history has] attempts to possibly pass a vote of no confidence on the new President. [Note the deployment of the word, “possibly” to have wiggle room here] The boat of the new President will be rocked. [which is typical cold reading patter, you can use this to claim anything]
By the way, in order not to keep you in suspense, what I frankly saw is a woman.

So … at a time when all the polls were saying “Hillary”, he decides to claim in advance that God shown him this. At the time there were good odds that this would be correct (hint: no Gods required to make that call), but he got it very wrong, and so you have various choices here …

I’m leaning towards number 3 in this case. The TV Evangelists are basically grifters who use religious belief as a tool to enrich themselves because it is a socially acceptable form of fraud.

It’s the classic modern con. If you sell a box of something that is empty then you will be held to account for that. However, wrap it with religion, and you have the ultimate get-rich-quick scam. He is now very very wealthy, as are many who have a complete lack of moral scruples, and happily leach off gullible followers by manipulating their emotions.

The Bible and Prophecy

Usually his “prophecies” are so vague he can claim a hit no matter what the outcome is, but in this case he slipped up by going for the most probable outcome and got it wrong, so now he is scrambling to cover it all up.

But the prophet, which shall presume to speak a word in my name, which I have not commanded him to speak, or that shall speak in the name of other gods, even that prophet shall die. – Deuteronomy 18:20-22

… and of course this deeply devoted believer who asserts that every word within the bible is all true, divinely inspired, and must not be ever doubted or challenged, will hope you and his followers don’t know about that specific verse.

How does #TBJoshua explain his "prophesy" that @HillaryClinton would be the U.S.'s 45th President? He deletes it https://t.co/ByAlAQfVv9

#TBJoshua predicted #Clinton would win the US presidential election. Miracle is that it has been removed from his #Facebook account.

How have his followers responded?

If you check out the comments under the YouTube clip, you will find it to be a mixture of mockery, and others in complete denial. Some believers rationalise it by claiming that he is not wrong and so proceed to go through some amazing mental gymnastics. As an example one chap points out that he was actually correct because Hillary won the popular vote, hence he is right. I’ve also seen others attempting to claim that it never happened and is just a trick being played to discredit a man of god.

Now pay attention, this is a rather important point to appreciate … Belief trumps facts. If you have a belief that conflicts with reality then the belief will often win out and prevail.

This is something that is not specifically religious, we can find this happening within many different contexts. For example, despite mountains of evidence and a prevailing consensus within the scientific community, Donald Trump is totally convinced that Climate Change is just a big hoax.

Beliefs have consequences and are often not harmless. In the Donald Trump instance he has stated that he will be pulling the US out of the Paris Agreement and getting into coal, oil and gas in a big way. His new head of the US EPA is also a Climate Change nut, and so his belief is basically going to fuck all of us in a very distinct measurable way.

How should we respond?

Despite the apparent immunity to reality, it still remains important to highlight and mock bad ideas and absurd ideas. This is  because not everybody is totally impervious, some do eventually have their eyes opened.

As one commenter pointed out …

A shepherd raises sheep for one of two reasons. Do you really want to be one of the flock?

… especially when he is so very blatantly revealed to be a fraud.

Facts matter – myths are being used by both rogues and also the delusional in a manner that will cause considerable harm. Often the best way to push back is with satire and mockery, hence I love the twitter storm that this provoked.