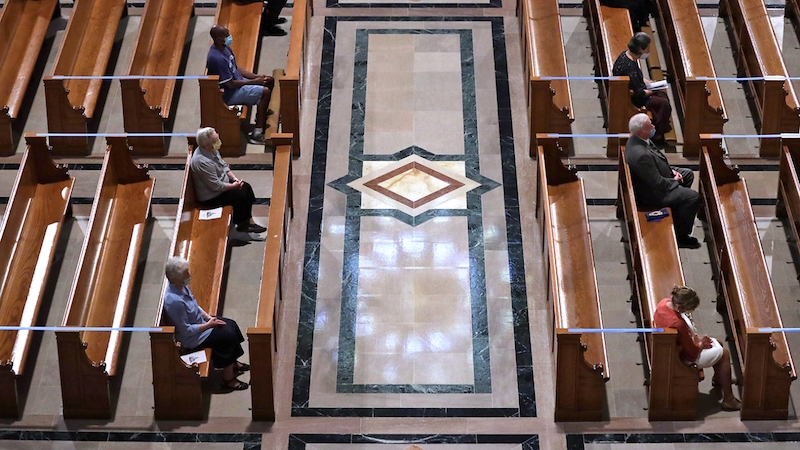 The idea of religious exemptions for COVID-19 regulations is quite frankly daft. The regulations exist to protect us all. The prevention of large gatherings with no social distancing and no mask wearing is there to slow down transmission. Some who are deeply religious sincerely believe that this should not apply to them. This is stance is taken for a variety of reasons that are generally grounded in a complete denial of the danger they face. There have been tragic consequences. Here are some recent examples from the last few days that I googled randomly …

COVID-19 does not check your beliefs and so no matter how sincere such beliefs might be, regardless of the degree of confidence, or depth of feeling, many are running slap-bang into the brick wall of reality.

What do the wider public think about religious exemptions?

Pew recently asked that question and so we do have an insight.

The answer Pew reveals is of course in the title of their article.

A new Pew Research Center survey finds that U.S. adults overwhelmingly say houses of worship should be required to follow the same rules about social distancing and large gatherings as other organizations or businesses in their local area. About eight-in-ten Americans (79%) take this position, four times the share who think houses of worship should be allowed more flexibility than other kinds of establishments when it comes to rules about social distancing (19%).

The numbers break down as follows …

Of interest here are these insights.

Religion rather unsurprisingly plays a role …

What about the Deeply Religious, how do they feel?

Pew measure this by looking at the statistics for those who attend on a regular basis. here is what that reveals …

In the above we learn the following …

For everybody else the new normal is exactly what you might anticipate. The vast majority of religious attenders (79%) say their house of worship is streaming or recording its religious services so people can watch online or on TV.

What you can also draw out from this survey is an insight into what people actually do. While the survey suggests that many people would feel comfortable going, far fewer Americans – 12% of U.S. adults overall – say they actually have gone to services in person in the last month.

News headlines of COVID-19 denying pastors insisting that they are a special exemption because God will protect them abound. Pictures of large religious gatherings with no masks and no social distancing appear to be common.

What Pew reveals is that they are the exception, the outliers, and so they make the news because they are a whacky fringe. The vast majority of the population, including those that believe, look upon their behaviour with disapproval and horror because they are an active threat to us all.

Most people are being sensible and not irresponsible.

Unfortunately, the pandemic is being prolonged because some simply don’t grasp the consequences of their actions and understand that their non-social distancing and non-mask wearing places of worship have become giant petri-dishes for COVID-19. That’s not just an opinion, that’s a fact.