Oh boy, here we go again, and as beautifully summed up by Jonathan Jones in the Guardian …

Student union officials took down the advert for the Atheist Society at London South Bank University in what has to be one of the daftest and most anti-intellectual acts of censorship since the Catholic church told Galileo to point his telescope the other way round in case he discovered something that offended flat-Earthers.

Yes indeed, they had a poster that was deemed to be “religiously offensive”, so they stepped in to protect those of a religious disposition from catching a glimpse and so they saved them from being “offended”. Does this now imply that the South Bank University’s students union are the guardians of all things offensive? If so, then I have a very long list I’d love them to work their way through.

Can you spot the ever so subtle flaw in all this lunacy?

OK, let me spell it out … every belief is from the viewpoint of every other belief is “offensive” to those that deeply embrace the belief as the ultimate “truth”. For example, Muslims assert that Jesus is just a prophet and is not the son of god, and that is offensive to Christians who do truly believe he is god. Turn that coin over and oh look, Christians assert that Jesus is indeed god and that assertion is offensive to Muslims who reject that claim.

So what should we do, censor everything so that nobody will be offended? Oh wait, doing that then offends everybody who believes in free speech, so should those who wish to censor be in turn be censored because their censorship is itself offensive?

If you think this lunacy all sounds crazy, then well done, because unlike the South Bank University’s students union, you get it.

Are you are curious to know what actually got censored, well if so than here you go, this is the poster that tipped them over the edge … 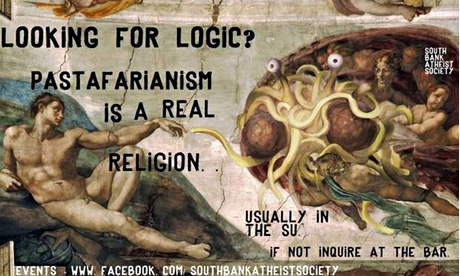 Yes indeed, it is a parody of the Sistine masterpiece, because this is a poster for  The Church of the Flying Spaghetti Monster, a ‘pastafarian’ ministry, and so all you have here is a rather witty ad for disbelief.

To be truly honest, I am struggling really hard to try and grasp why even the most religious believer would not actually laugh but would instead be offended by this.

Now let us get one thing very clear – not being offended is not a right.

So is this all just a once-off foolish mistake by them? Nope, not all all, Rory Fenton, the President of the National Federation of Atheist, Humanist and Secular Student Societies in the UK and Ireland, has a great article on all this over in the HuffPo. He points out that the South Bank University’s students union has been running on ongoing campaign to suppress the rights of non-religious students …

South Bank’s Atheist Society are no stranger to hostility from their students’ union. When they were formed last year and affiliated to their union, they were accepted only on the condition that they didn’t criticise religion or hold debates with religious groups, which is as absurd as telling the Socialist Society to steer clear of critiquing capitalism. Despite hopes that a new academic year would bring a more reasonable union committee, the group has faced constant opposition. Since the start of their first term, they have seen their posters torn down and stamped on the day they are put up, including posters simply showing Brian Griffin, Family Guy‘s atheist talking dog. I attended a meeting last term at which their union accused them of picking on Christians for a poster stating, “We may not be able to turn water into wine but we do like wine, join us in the bar next Thursday”.

As the society’s president Cloe Ansari told me, “I felt harassed and intimidated – it was not aimed at protecting other students from harm but an attempt to sideline and restrict our rights; perhaps perceived as the easier option rather than standing up to the much bigger religious societies. Rather than included, we have been made to feel as an unwelcome minority of secularists”.

By doing all this they have in fact now effectively thrown a spotlight upon themselves and have now come to the attention of the wider media. The result – everybody is laughing at their complete and utter lunacy. Hopefully all this attention will now motivate them to pause and seriously reevaluate their policies and priorities, … or as Mr Fenton beautifully puts it …

Gods don’t need students’ unions to look out for them, students do.