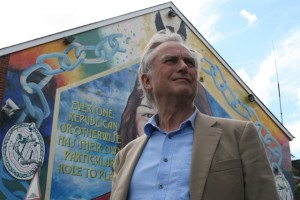 A couple of days ago in the UK Channel 4 broadcast “Faith Schools Menace?” in which Richard Dawkins was the presenter … Oh heck,  …(slaps hand on head for missing it). Don’t panic, all is not lost. If you missed it like I did, then you can watch it on You Tube here … (Phew!).

If you’ve not seen it, here is a quick summary.

The number of faith schools in Britain is rising. Around 7,000 publicly-funded schools – one in three – now has a religious affiliation.

In this passionately argued film, Dawkins calls on us to reconsider the consequences of faith education, which, he argues, bamboozles parents and indoctrinates and divides children.

The film features robust exchanges with former Secretary of State for Education Charles Clarke, Head of the Church of England Education Service Reverend Janina Ainsworth, and the Chair of the Association of Muslim Schools, Dr Mohammed Mukadam.

Its well worth watching (especially if you live in the UK), I recommend clicking the You Tube link.

Now, as you might expect, various reviewers wrote it up the next day and included amongst their number was the Guardians TV Critic, Sam Wollaston. I generally like the Guardian and I generally like what I read there … but hey Sam, what the heck!! …whats with the Ad Hominem side swipes at Richard?

In his article Sam writes …

“When Richard Dawkins’s daughter was 10, he tells us in Faith Schools Menace? (More4), he wrote her a letter asking her to think for herself ………….Interesting that he communicates with his daughter by letter, though.“

Hey Sam, now why be such a prat with a remark like that? It doesn’t take too much Googling to find out that Richard was at one point divorced and did not see too much of his daughter as she was growing up.

But Sam Redeems himself with …

“Of course, he’s right. Faith schools are a menace. It’s a disgrace that the state pays for our children to be divided and indoctrinated with irrational belief.    ……..    His arguments are faultless, his thinking crystal clear; ……“

“….. he seems to be trying to keep the rage in check ….he seems less purple and apoplectic than he was on his last TV outing, less fundamental in his atheism, less likely to blow himself – and thousands of others – up in the name of Darwin“

Wait what!! … Rage? … name one occasion when he has lost his rag on TV. Purple and apoplectic!!! Sam, give me the name and date of just one single interview where that’s true…. and then “Less likely to blow himself up” … Oh for Darwin’s sake Sam, you paint an image of Richard as if he was some sort of Darwin motivated suicide bomber, that’s simply unfounded, unmitigated complete crap. Yes OK I know, Sam was trying to make a joke … but it falls flat and doesn’t work.

Ah heck, enough ranting for now. Folks, just go click the You Tube link and enjoy. But if time is pressing save and cherish it for a rainy day and read some other “better” write-ups like this BHA one here, or the far superior review in the Independent here, or the fabulous review in the Scotsman here.