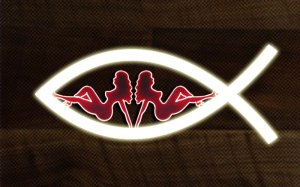 A big-ticket item that religious beliefs often promote is the idea that they retain an exclusive claim on the high moral ground – unless you embrace the belief and (slipping into Christian speak mode) are washed in the blood of Jesus / Baptised in the spirit / have invited Jesus into your heart, then you are lost and will instead have given your life over to the pursuit of the flesh, and will wallow in … well you know the banter I’m sure, it’s familiar stuff for any who have a past history within a religious belief, or have, in a moment of idle boredom, paused out of curiosity to see what the guy with the bible on the street corner is selling.

What is of course interesting is that while much of what is claimed is not actually measurable, there is a specific aspect to all this that is. Words such as “spirit” or “soul” do not describe anything that is actually detectable or real, nor do terms such as “saved” or “redeemed”, but a claim that it will make you a better more moral person no longer focused on the pursuit of the flesh is indeed something we can measure.

Now when you do look into such things, the rather embarrassing revelation (for the religious) is the discovery that such claims are demonstrably false.

A new study published in the journal Archives of Sexual Behavior, produced by researchers from Canadian Universities, found American states that identify as more religious and conservative are also more apt to search for sex online.

Sorry, that one is behind a paywall, (Oh come on now, the topic is “sex” so they want you to pay for that).

So the title of the study is a question “Do American States with More Religious or Conservative Populations Search More for Sexual Content on Google?” and I’m sure you can guess the answer – hint, if it had been “no”, then they would not have had a paper to publish.

This is where I move beyond the study itself and begin to speculate.

If you live in a climate where rather a lot of quite normal human sexuality is buried, not talked about, and abstinence is promoted as the most ideal solution for teen pregnancies, then a climate in which people can secretly turn to google will indeed prevail.

Having created the problem in the first place, religion also has the “magic” solution. If you are caught, no problem, just put it down to the weakness of the flesh and ask Jesus for forgiveness, so with a safety net that is more or less a get-out-of-jail-free card it’s never really a problem.

Ah but that was simply somebody making mistake, an odd exception. Actually no, it was to be a pattern I saw again and again and again. Should I perhaps talk about the sunday school teacher in another church I attended that was found to have been buggering some of the kids? He, quite rightly, went to jail, but what was also rather shocking was the desire by the church to cover it all up. Or shall we discuss the pastor who was renowned for preaching a specific line all about leading a holy life (whatever that means) and was one day discovered to have been having a sexual relationship with many of the wives in the church who had been going to him for “counselling”. He is still today active on Facebook boasting about his long successful career as a pastor.

Now remember, these are all from a specific branch of Christianity that claims to be truly special, they are the evangelicals and pentecostals that claim to have been baptised in the spirit or some other similar term of meaningless religious babble. These are the same folks that would look down upon Roman Catholicism as a false heresy and tout the sexual scandals within that institution as proof of that stance, and yet fail to recognise that they are no different.

Is it Just a Christian Thing?

Actually no, it appears to be rather universal. Wherever you find religion suppressing human sexuality, you will also discover that it also bursts out and that such suppression has consequences.

The study in question utilised google trends, well hey anybody can use that, even you.

I’d heard a rumour about something, so I just did a search for the term, “Animal sex”, and sure enough, the number one nation that pops up as the source of the most people searching for that is one of the the most highly conservative and deeply religious counties – Pakistan.

So looking a bit more using other similar terms, who are the top searchers? …

Now why does all this not surprise me.