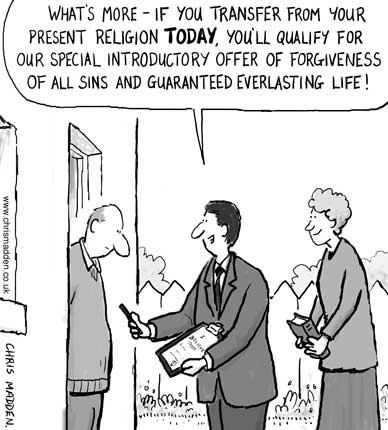 Many people inherit their religion, they simply absorb the belief of their parents and fall in line with the behaviour laid down by a specific pattern of thinking without really giving it very much thought at all. Clearly the driving factor is a desire for acceptance by both their parents and also a desire to be part of the prevailing tribe or culture, but what about those who step out of that role and convert to something else, how does that work?

In religion and politics people’s beliefs and convictions are in almost every case gotten at second-hand, and without examination, from authorities who have not themselves examined the questions at issue but have taken them at second-hand from other non-examiners, whose opinions about them were not worth a brass farthing. – Mark Twain

Beliefs by their very nature are neither rational nor logical, and yes many might claim they are, but that claim does not withstand any critical analysis, and so “reason” is not the answer, something else is going on. It is perhaps tricky to arrive at a truly generic answer to such a question due to the diversity of human thought that prevails, so I’ll focus down on one specific belief system and take a look. Then having arrived at an answer, we can then step back and see if the same answer can be applied to other beliefs. My rather random choice for this is Mormonism, perhaps because they are very much into the business of conversion is a very big way.

Conversations with Mormon Missionaries – How they will convert you?

Most prevailing belief systems motivate those within it to reach out and infect others with their belief. It is like this because the process of natural selection means that the beliefs that can propagate themselves successfully will thrive.

Within Mormonism, this is not simply a casual obligation, it is also a full-time profession, they have missionaries who have been trained to gently hook you in with “milk before meat”, and so will cover up the truly weird stuff. If you are engaged in a conversation, you will not hear about how you can become a god, or the various temple rituals, instead you will be presented with a message that sounds similar to mainstream Christianity. The process is one that involves a set of “discussions” that they have been trained to deliver. In the past it consisted of pre-canned memorized talks, but is now a little less rigid, today’s missionaries are advised to “follow the spirit” but essentially to stick to the same basic message and approach.

Their entire process is one that also involves a lot of research but this is obviously motivated by their desire succeed. This often involves polling those that do convert about what worked and what did not so that they can then refine and tune the mechanics of the conversion process. What they have discovered is that if they can connect emotionally then they will succeed, because those that do convert report that the following factors played a key role:

Note the emphases there is very much an emotional one, but this is to be expected because beliefs that can successfully tap into human emotions thrive, and Mormonism is very good at doing exactly that.

“truth” is not about the things that are actually true, but instead is all about persuading people that the specific ideas that they are presented with generate a “good feeling”. A tactic often used by missionaries is to ask, “Do you feel good about what you’ve heard so far?” When asked this by a couple of polite very friendly clean-cut and generally pleasant enthusiastic young lads in a non-confrontational manner, many usually say “yes“. “Ah”, they will then exclaim, “those feelings are produced by the Holy Ghost to confirm that what we are saying is true”. As things progress that strategy continues, and so potential converts become convinced that whenever they feel good about what they are hearing, it is God confirming that it is indeed truth. That same tactic is applied to prayer, “Pray and ask God if Joseph Smith was a true prophet”. They then advise you to continue to do this until you get a good feeling in your heart, and that this will confirm it. Note the complete bypass of all reason and the avoidance of some rather embarrassing facts (Smith was a known fraudster who had a track record of exploiting people’s gullibility  before he got into the religious business).

Another crucial strategy for the missionaries, is to convince contacts that Mormonism is part of God’s plan. This matters because it essentially hooks into the prevailing belief that already exists and presents itself as belief+, the next step. For Christians, they will start out with by using the bible to present this “plan” … god planned to create man in his own image. It was a “plan” for us to progress in steps; he planned to send Jesus, he planned a New Testament church; he planned a heavenly reward for the faithful, etc. Once the idea of this planned roadmap has been psychologically embedded, individuals are then ready to anticipate more. The key point is this; “If God had a plan, would he suddenly quit in the middle? No! he would carry on unfolding more” If you are familiar with Mormonism, then you can see where this is going, it is a message in which they now have the restored, only true, and very latest church through Joseph Smith, and the next steps in the “plan” includes their priesthood, the Book of Mormon, temple rituals, work for the dead, godhood, etc etc. It works because it allows individuals to make the leap to a new belief without actually rejecting their current belief, but rather by embracing a new improved variation of the same.

What if none of this works? No problem, missionary lessons are often given in the home of an officially-appointed “friendshipping family”. When the missionaries conclude and are ready to move on, any individual that is still reluctant to join, is left in the hands of “friendshippers”. They are instructed to continue conversion efforts by down-playing religion and focusing on establishing friendly ties. This usually works.

What we can clearly see here is that the keys to successful conversions are not rational ones, but rather consist of

Mormonism, or to be more accurate, the LDS, have no monopoly on these tools, it is an open market out there, most beliefs have variations of the above. For example Christianity is obviously a new improved variation of Judaism. Look deeper in and you also find that the various different strands of Christian thought follow the same pattern, Methodism – a new improved variation, Baptist – a newer improved version. Interface with any of the happy-clappy lot and they will explain that “Catholics” are not “true” Christians because they have not been “born again”. Islam is exactly the same; a new improved version of Christianity. Look inside and once again we find the same splintering with lots of different factions; later ones, for example the Ahmadiyya, claiming that they are the True Muslims and have the new improved version via a new prophet and that the others are all false.

I need not say too much about the emotional manipulation that goes on, while the form it takes varies considerably, the reality of it is beyond doubt. There are religious words that you will often hear that describe it. Terms such a “spiritual” is simply a word that describes a human emotion that has been invoked by a religious experience or may even just be invoked by a religious place. The vocabulary deployed also disguises it with phrase such as, “the peace of god”, being “born again” or “baptised in the spirit”, or “god spoke to me through …” – all are examples of beliefs tapping into human emotions.

What can we conclude?

Beliefs that thrive manipulate humans like this, not because they are in any way true, but because they have had thousands of years to grow and have competed with each other, so those that are good are surviving and propagating have been naturally selected because they are really good at tapping into human psychology.

Engage with a believer and you will often be presented with justifications for the belief. If you logically demolish that and demonstrate that none of it is actually true, it makes no difference, the belief remains intact and usually the believer is completely immune to any form of logical reasoning. This is because the foundation is not fact based, nor is it rational, but rather is emotional.  Religious individuals are usually very heavily invested emotionally in the belief and will remain so, not just because of the overwhelming desire to stay inside the tribe and to belong because of the emotional security on offer, but also because they are addicted to the emotional kick that the belief delivers on a daily basis.

Sadly bad beliefs lead to bad behaviour, so it is wholly appropriate to offer people a better alternative. If you offer no alternative it will be of no interest, but if you engage and can inspire a desire to pursue the things that are actually true, then you can indeed motivate some to put aside the toys of our childhood, to start asking questions such as “is this really true?”, and to reach out for a better more moral, more reasoned and less irrational alternative.

Can a completely batty speaking-in-tongues Pentecostal nutter really be persuaded to make such a leap? Yes, and I should know because I was once one.

Every atom in your body came from a star that exploded. And, the atoms in your left hand probably came from a different star than your right hand. It really is the most poetic thing I know about physics: You are all stardust. You couldn’t be here if stars hadn’t exploded, because the elements – the carbon, nitrogen, oxygen, iron, all the things that matter for evolution and for life – weren’t created at the beginning of time. They were created in the nuclear furnaces of stars, and the only way for them to get into your body is if those stars were kind enough to explode. So, forget Jesus. The stars died so that you could be here today.” – Lawrence Krauss