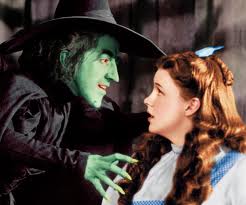 Viewing those who truly embrace an eccentric Wicca-based belief as nutters is probably justifiable, but labeling them as “Witches” and practitioners of evil is truly dangerous. Christianity is hostile to all other forms of belief and is fully prepared to fan the flames of such superstitious thinking. Many Christians would view the Wiccans as truly wicked because they are playing with evil forces. Even the bible tells them this, “For we fight not against flesh and blood, but against principalities and powers of the air”. – Ephesians 6:12, so for them it must be true.

While Wicca does indeed have rituals that involve the casting of spells, at its core it is simply a primitive nature-centric belief centered on the worship of multiple goddesses and gods. Like Christianity, it has many diverse strands of belief, but most adhere to the Wiccian Rede which is summed up as “Do what you like, but don’t harm anybody”. In other words they are just a bunch of harmless nature loving nutters who have rejected mainstream beliefs and instead opted for a more primitive less structured and far simpler alternative.

Are you tempted to think, “So What, let the Christians believe whatever they wish, what harm can it ever do, the wiccians don’t mind?”. Well, here are some examples of what happens in some cultures when such hostile superstitious thinking takes root:

11 people accused of witchcraft burned to death by mob.

old woman accused of being a witch is burned alive.

Hundreds of children accused of witchcraft beaten and burned.

Are you tempted to point out that the witchcraft belief for the examples above did not happen in a modern western country such as the UK or the US and that the actual atrocities cited above occurred far away in Africa and could never happen near you? Sorry no, that’s not a credible get-out-of-jail-free card, both are related. It is quite common for folks within fundamentalist groups to go off to Africa on a missionary stint or to support those who do.

Countless examples of such harrowing atrocities exist. This is not Salem, these are recent news stories, its happening now. This is where such unjustified paranoid beliefs take you, and that’s why its wrong.

Halloween is a bit of harmless fun, nothing more. Most of us dress up, but its a game, and is not deemed to be reality. The folks who truly practice Wicca are simply harmless nutters participating in a made-up belief, its nonsense, but best of luck to them if that is what they wish to do. However, to the folks who fan the flames of superstitious belief that results in people being burned or beaten to death, they are the ones who are being truly wicked … so at this time of year, watch out for wolves dressed as sheep.

1 thought on “The reality of Witchcraft today”