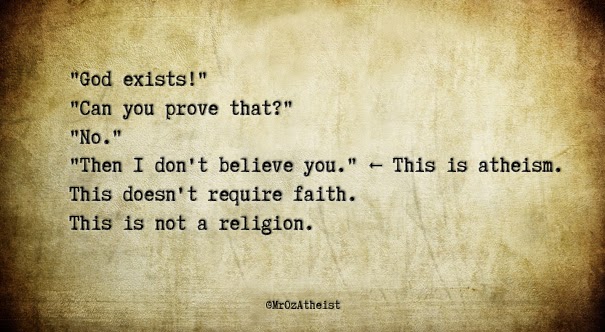 A rather common claim that often pops up is the assertion that atheists believe that something came from nothing. Here is a specific example within the Christian Post …

It seems atheists would much rather believe that something came from nothing, than to believe that Someone has always existed. Of course both beliefs are a matter of faith.

So did the universe come from nothing, or from God? Is there a rational mind behind the mathematical precision of the universe, as well as human DNA, or did it all just happen by chance?

… and of course what follows is wrapped with all the usual religious hand waving pseudoscientific nonsense and is delivered with great enthusiasm and passion. While I do not doubt his sincerity, I do seriously laugh at the pure absurdity of it all.

First, let us be 100% clear about the scope here

Atheism is a one topic conclusion – is there a god? No.

That’s it, that is the entire scope, there is no book of disbelief, nor a mantra, or scared cannon. There are no clerics, pastors or Mullahs, or even special days. It is perhaps odd to find that we have a word that describes something we are not, but when you consider the passion and emotions that belief can potentially stir up, it is perhaps also understandable.

So the entire basis of the article written by Mr Delzell is to attempt to claim that atheists believe something and that it is nonsense … except of course, as I hope you now grasp, atheism is not actually a belief but rather is the rejection of a belief. His specific example is of course the universe, and so by rejecting the idea that a god did it all by magic he is suggesting that atheists “believe” the universe came from nothing and that requires “faith” (which is basically pretending to know stuff you don’t actually know at all).

Nope, it does not work like that. The actual answer when faced with things you don’t actually know is “I don’t know”, and so if he truly did wish to understand the current scientific thinking regarding cosmological origins then he is having that discussion with the wrong people, he needs to interact with cosmologists.

I suspect that is not going to happen and he will instead simply stick with “magic” (which is what it boils down to for him) and that perhaps illustrates the problem with such answers – they stop you asking questions, quash curiosity, and stifle learning.

It is not just the Information, it is also the Methodology

Where things appear to go wrong is that it is not just people grasping the wrong answers, this is clearly not …

It all very much comes down to being deeply trapped by an idea. He has invested his entire life in religious belief for cultural and emotional reasons, and so natural psychological biases such as confirmation bias and cognitive dissonance kick in to enable him to preserve and protect that deep investment.

Beyond the word “Atheist” which is simply a conclusion to just one question, there are other words as well, and so there is no requirement to be tied to any specific label. Words such as …

… and much more describe different aspects that can all come together to enrich and improve a life.

You cannot teach a man anything; you can only help him to find it within himself. – Galileo

2 thoughts on “The scope of atheism does not include cosmology”