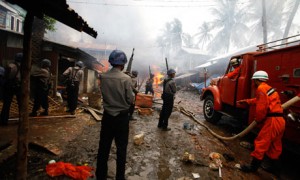 Not too long ago there were reports circulating on social media of a massacre of Muslims in Burma. As proof, photos were available … slight flaw, the claims being made were fake. An examination of the photos soon revealed them to be fake, and to have been images of events that took place in different places and different times, all totally unrelated to anything going on in Burma.

Since then, whenever I have been faced with claims regarding a crisis in Burma, my knee jerk reaction has been to simply dismiss it as yet another hoax by some Islamic fanatics trying to start a wider conflict with Buddhists by provoking Muslim anger.

Being the curious soul that I am however, I’ve spent a little time digging and have come up with some details regarding what has actually been happening, it turns out that there is a real story here.

So what is actually going on? Some regional riots involving the Rohingya Muslims in Burma’s Rakhine region erupted last June  after the alleged rape and murder of a Buddhist girl by some Muslim men. The disturbances not only resulted in ten Muslims being killed by an angry crowd who believed them to have been the rapists, but has also caused so much disturbance that a mass displacement of tens of thousands of people has now taken place.  The authorities ended up making things a lot worse,  with a state of emergency in place, Burma’s security forces stepped into conflict, and as highlighted by Amnesty International, proceeded to deploy devastating violence against the Muslim minority.

Was all this motivated by an alleged rape and murder? Actually no, there is a lot of history here that dates back to the 1950’s when Burma began its project of “Burmanisation”. With the rise of the fanatical socialist military dictatorship things got progressively worse over the years for the community, they were targeted in riots during 1978, stripped of their citizenship in 1982 and have ended up suffering atrocious human rights abuse, including slave labour and torture. That led to an exodus into Bangladesh in 1991-1992.

What is utterly tragic here is that almost nobody … almost nobody at all … truly gives a damn about these disenfranchised isolated people.

Aung San Suu Kyi has remained silent … why? Like most politicians, she has an eye on the elections (due in 2015), and so with a burning need to placate her constituency, she dare not take any action or say anything. Because Burma is currently being democratized, nobody wants to rock the boat and so the Rohingya are in effect being sacrificed as collateral damage.

This Rohingya minority is a Muslim minority, so you would expect that perhaps neighbouring Muslim nations would be there to help their fellow Muslims. Alas no, they also have a political agenda.

Last week Bangladesh ordered three NGOs to stop providing food and other humanitarian assistance to the Rohingyas in the border area, claiming it did not want to encourage more asylum seekers to its shores. Already 40,000 unregistered Rohingyas live in makeshift camps in Bangladesh, and according to the UN Refugee Agency, the latest violence will result in a greater influx of people – whether Bangladesh likes it or not.

The stunning lack of action does not end there, there has been a complete lack of any support for the Rohingya from other neighbouring Muslim nations such as Indonesia, Malaysia and Brunei, that is quite frankly startling. Basic human decency demands that the Rohingya need urgent help. There has been a Muslim outcry against an apparent global silence as proof of the grand conspiracy against Islam, yet the truth is that nothing is being done by neighbouring Muslims to actually reverse the treatment of their purported brethren themselves. 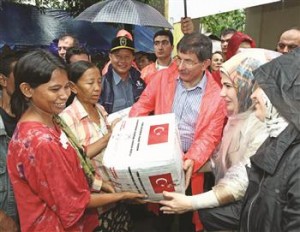 There are some good guys, Turkey, not a neighbour, has acted decisively. The Turkish FM Ahmet Davutoğlu and Turkish Prime Minister Recep Tayyip Erdoğan’s wife Emine Erdoğan personally distributed aid packages to Muslims in the camps in Myanmar (pictured). There were even images of the Turkish prime minister’s wife sobbing as she witnessed the effects of the violence herself. On Aug. 9 Davutoğlu personally met with Myanmar opposition leader and Nobel Peace Prize winner Aung San Suu Kyi in Naypyidaw and confronted her with the issue of sectarian conflict in the country. In reply Suu Kyi said she tries not to take sides, so neither of the groups will feel it is receiving unfair treatment.

The circulation of fake claims regarding the massacre of thousands has done a considerable degree of real harm. Those attempting to highlight the true scale and real cause of this crises are now being ignored because many feel they are simply hearing yet another fake claim. That attempt to stir up hatred has had dire consequences for the victims of this crisis. Imagine how different things might now be for the Rohingya community if instead of manufactured myths, the real truth had been highlighted.

Shame upon all those who circulated the fake claims – the result is real harm. Shame upon the neighbouring Muslim nations who have not only opted to take no action, but have actively stopped food and other humanitarian assistance from getting through.