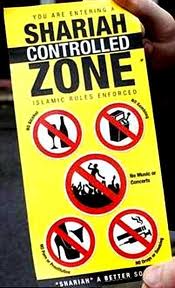 A Pew Research survey entitled “The World’s Muslims: Religion, Politics and Society” polled 38,000 Muslims across 39 countries, and shows that the majority favour the implementation of sharia law.

However, there is one very important fact that can also be demonstrated from this same survey,and while is something that is already known to those familiar with the topic, it has not actually penetrated the public consciousness … I’ll put it in bold …

This measurement is meaningless

The rather stark problem with the claim that a majority of Muslims want Sharia is that there is no consensus on what Sharia actually is.

OK, let me put this in different terms, if we conducted a poll in which we asked people, “Would you like to live in a just and fair society where the law is upheld and applied equally to all?”, how many would tick the “Gosh no, not at all” box, you would of course get a majority. If you then probed a bit and attempted to determine what that actually meant, you would quickly discover that terms such as “fair” and “just” were more than a tad fuzzy, or for that matter they would not be able to tell you what  “laws” should be applied”, there would be no consensus at all. Sharia is exactly the same, asking people if they want it is a generic religious Islamic term for the same. Islam, like every other belief system, is an umbrella that shelters a vast diversity of conflicting thoughts and so this division  is what you could and should expect. Not only does it range from some who would advocate “quran only”, all the way through to those who advocate “quran + hadiths” (there is not even agreement among the hadith+ community as to which of those to include and which to exclude), but even if there was agreement on which texts to base sharia upon, there would still be no consensus. This is because such texts are not only at best poetical and vague, but are also written using a rather archaic form of Arabic that is not the same as modern Arabic and is not really understood all that well. To make matters even worse, within the Islamic traditions there is a huge body of contradictory information … so the fact that there is no consensus on what sharia means is not at all surprising.

There are of course cultures where one specific variation of sharia has been imposed. Take Saudi Arabia for example, I’m sure you are familiar with the degree of pure bat-shit crazy that prevails there, there are many examples that are common knowledge …woman forbidden from driving or doing anything without the permission of a male guardian, being permitted to avoid jail for murder by simply paying enough money to the relatives, beheadings, etc… Well, the specific variation of Islam that prevails and dominates there is known as Wahhabism, but other terms such as Salafi and ahl al-hadith (people of hadith) are often used interchangeably, and is an ultra-conservative branch of Sunni Islam founded in the eighteenth century by Muhammad ibn Abd al-Wahhab (hence the popular name, which as an aside they generally don’t like). OK, my point is this, yes here we have “sharia”, ah but most Muslims, and that would be about 99% of the Muslim population on the planet, consider the Saudi’s to be complete nuts, and to be totally wrong and in error.

No matter what variation of Sharia you pick, it will never ever be the right one for the majority of the Muslims on the planet because it would not be totally in turn with their specific variation of belief, and that in a nutshell is what is wrong with the “we want sharia” claim … it has no meaning.

So what does the Pew Research Survey tell us?

We get to see just how diverse Islamic thinking is …

One final observation from this poll, the more experience Muslims had with living within ‘a narrow, rigid form of sharia’, the less supportive they were of it.

So what does all this really mean?

When we hear some say “We want Sharia”, we might hear it as a demand for the imposition of intolerance, homophobia, violence, misogyny and murder, but it is not, instead they are people just like the rest of us who want justice and morality. Without really understanding the implications of what happens when superstitious clerics are granted power, they use the word “sharia” to express that desire, but once they get “sharia” as literally interpreted by clueless clerics, they understand and soon point out … “er no, that is not what I meant”.

1 thought on “Pew Research … Most Muslims want Sharia law… but nobody agrees on what that is.”