It is often quite interesting to look at how a specific event is reported, and note the tone of the article. Such a comparison often tells us quite a lot about the bias that is introduced by the article’s author and perhaps also reveals a hidden agenda. Here now is an interesting example of this: 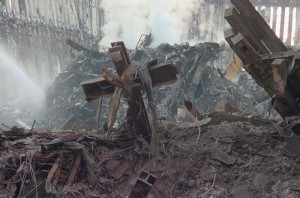 First … the event. A Metal beam, in the shape of a cross (pictured here) was found at 9/11 ground zero, it was subsequently blessed by a priest and erected as a memorial. What has now happened is that a US atheist group filed a lawsuit asking a judge to order the removal of the cross-shaped steel beam or request that other religions and nonreligious views be equally represented. My thoughts? Well, it sounds fair to me, we live in a pluralistic society, all they are asking for is an even playing field.

Now, let us see how this has been reported. First up with have the UK’s Guardian. The Article published here today, is quite neutral, sticks to the facts, and also has appropriate quotes from folks on all sides of the argument. I have no problems with this and do not see anything of concern. Here is an extract for you to sample …

A US atheist group has filed a lawsuit asking a judge to order the removal of a cross-shaped steel beam at the 9/11 memorial in New York or request that other religions and nonreligious views be equally represented.

The cross was found amid the wreckage from the terrorist attacks by a construction worker who said he stumbled onto a miracle. It was last weekend moved to the Ground Zero memorial – due to open on the 10th anniversary of the attacks in September – after a blessing by a Catholic priest. It is to become part of the permanent collection of a 9/11 museum opening next year.

Dave Silverman, president of American Atheists, the group which filed the lawsuit, said its main concern was equality.
…
Reverend Brian Jordan, who was instrumental in their preservation, said people from other religions came to pray collectively when he blessed the beam. He said it provided comfort to hundreds of suffering people and continues to do so.

Museum officials said the cross was being displayed not because of its religious value but the role it played in the aftermath of the attacks.
…

In complete contrast to the above the UK’s Telegraph has something quite different. A chap called Tim Stanley has written an article entitled “The attack on the 9/11 cross exposes the bizarre fundamentalism of American atheists” … Attack??? it conjoures up images of folks sneaking out at night to splatter paint all over it. Ah wait, perhaps a bit of context might help. Tim I’m sure is a nice chap, but does appear to have a bit of bias, other articles such as a defense of evangelical Christians against their Dawkinsite critics generated many comments, and he also says on his web site that “I’m a bit obsessed with Sarah Palin” and “I define my politics as Anarcho-Catholic – an eclectic kind of pacifistic, red meat eating, gun loving, tax hating, Buddha hugging voodoo.” so I suspect you can begin to see where he is coming from.

Right then, what is he reporting?

America’s culture war took an unpleasant turn this week. A group of atheists filed a suit to take down a cross erected at the Lower Manhattan memorial to the victims of 9/11.

He fails to report the full request to either take it down or to enable other views and religions to be represented. He then moves on to quote mine Dave Silverman, head of the American Atheists, and effectively portray him as a zealot out to oppress the evil believers.

It then evolves into a story that is about American Atheists making their big stand by picking a fight with the victims of 9/11 and claims that they “aren’t interested in either pluralism or being left alone.”. That claim is complete fiction, the entire agenda that drove the court order is pluralistic in nature and is simply seeking an even playing field.

After that the article evolves into a defence of religion … “What the New Atheists don’t get is that religion is functional” … fine, perhaps it is, but the foundation it is built upon is utterly irrational. It was our early attempt to understand the world around us. We now have better answers that have been derived from better ways of seeking understanding (scientific method, philosophy, etc…), so why hark back to older irrational beliefs on the basis that they are “functional” where there are better alternatives.

Nobody is proposing that we eradicate religion, we simply want an even playing field. The reality that we face is that it is religion that seeks to exclude all, we simply want to open up that closed shop.

So there you have it then … a news article that is really a platform for the promotion of religious belief and attacks an honest attempt that strives for true pluralism. When reading such news articles, beware when it is not just news but is instead quite clearly something else.