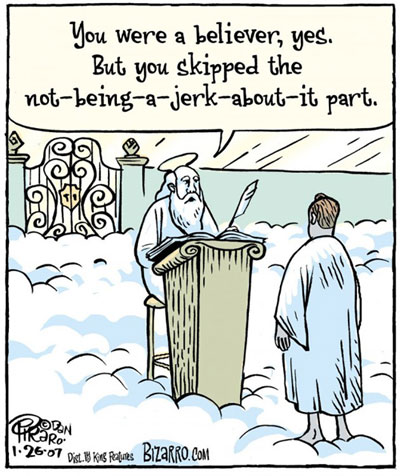 What reputation does the evangelical variation of christian belief have?

We have an insight into that via a new poll by the Barna Group.

You might wonder if there is some non-Christian bias in play here. Nope, The Barna Group are an an evangelical Christian polling firm based in Ventura, California, hence this poll gives us a view from a source that will strive to give this the very best possible spin.

Let’s take a quick look and see what we discover.

They asked the question “Which of the following words, if any, would you use to describe evangelicals in general?“. It was a closed list, those polled had a specific set to choose from. Here is what happened …

What is not a surprise is that if an individual was evangelical then they had a very positive view. However, amongst non-Christians words that were selected included “Puritanical”, “Homophobic”, “Uptight”, “Invasive”, “Misogynistic”, and “Racist”.

In might indeed be an opinion poll, but terms such as “Homophobic” are well-established facts, and yet many evangelicals are blind to this reality.

Jumping into bed with the pussy-grabber who locks kids in cages has also played a role in how people view them. Here is how things play out if you look through a political lens at the responses …

Clearly political choices have had consequences. It has revealed the degree of religious hypocrisy in play within evangelicalism.

The Friendly Atheist has a few thoughts

Have they been unlucky and simply have had a bit of bad PR?

Hemant spells it out as follows …

Why would anyone want to join this club? These aren’t people who were tainted by Donald Trump. They’re people who had the power to steer him in any direction they wanted, and they decided to go with cruelty and corruption.

They don’t need a makeover. They need to rethink their entire theology.

One last bible quote – an apt one

One very appropriate bible quote is perhaps this one …

Ye shall know them by their fruits. Do men gather grapes of thorns, or figs of thistles?

They have worked hard to earn their current reputation. Evangelicalism is a world where hatred and discrimination against gay people trumps basic human decency.

You might doubt that claim but facts are facts. This past week we have observed an announcement from Chick-fil-A generate a lot of flack. They declared that their corporate charitable donations will focus exclusively upon organizations that focus on education, homelessness and hunger. That unleashed a backlash of protest from evangelicals.

Because tackling education, homelessness and hunger is not something they favour. They much prefer Chick-fil-A to fund hate groups.

Such actions reveal what resides deep with many evangelical hearts and it is truly very toxic dark stuff.

These are not decent human beings, but given that this is the base that happily supports the idiot-in-chief, so I guess you already knew that.

Further Reading on the Evangelical Poll