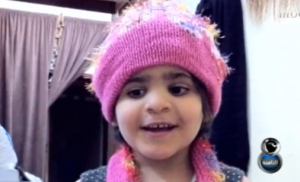 Pictured here is Lama al-Ghamdi, she is five years old and was brutally raped and then murdered by an Islamic cleric who also happened to be her father. It was a truly horrendous crime …

Randa Al Kaleeb, a social worker from the hospital, said in a phone interview that Lama’s back was broken as well and that she had been raped “everywhere”. Lama died of her injuries on the October 22, 2012.

Lama’s father, Fayhan Al Ghamdi, confessed to being the perpetrator and to using cables and a cane to afflict the injuries.

So what now happens to this religious thug?

Saudi, as you might be aware, is a brutal religious theocratic dictatorship, and will almost at the drop of a hat execute you in public for some truly daft things. So what exactly merits death (usually by stoning or beheading)? Well, apart from the obvious such as murder, the Saudi’s also feel that the following merits a death sentence …

As for a fair trial, forget it, not a chance, under age teens can be executed, you will probably not get a lawyer, nor will you be permitted to present evidence that would save you, and they will usually beat a confession out of you even if you were innocent, then lop your head off.

So, in this harsh climate this brutal rapist and murderer is for the chop … right?

Wrong, he has two distinct advantages, he is male and he is a cleric. The Saudi media reports that he simply paid 200,000 riyals ($50,000 US) in “blood money” for his crime, and will not even be required to serve any time in prison.

It gets worse, if Lama has been a boy this gobshite would have been required to pay twice as much, but because his victim was a girl, it is not really deemed all that serious, so he only pays half the fine you pay for murdering a male child.

You might be wondering if this is really true and perhaps ponder the thought that it has been exaggerated a bit … alas, tragically no, it is all quite accurate.

This one case is just the tip of the iceberg, human rights activists point out …

The courts’ leniency towards male abusers and murderers reflects the larger problem of the male guardianship system in Saudi Arabia, wherein ALL women are considered minors and are automatically assigned to the care and judgement of their most immediate male relative. This guardianship gives the male relatives the power to sell girls legally into child marriages and to ban adult women from work, travel and obtaining medical operations.

Some might claim that the Saudi regime is our “friend”, but when such barbaric injustices prevail, and atrocities such as intolerance, misogyny,  homophobia, stoning, beheading, and state sponsored murder run rampant, then I can assure you that this theocratic dictatorship run by religious thugs is no friend to humanity.

If you also wonder why some are opposed to Islamic Sharia, well this is what happens when you follow such 7th century thinking though to its logical conclusion.