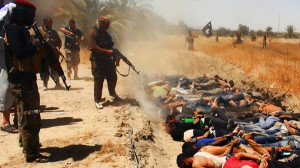 It is rather easy to condemn ISIS, as a collective gang of theocratic thugs who rampage across Syria and Iraq destroying anything and everybody who does not conform to their supposed “truth”, the result is a trail of blood, horror and brutality almost unmatched. I need not dwell too long upon this specific aspect, for they do not seek to hide their actions, but instead they openly promote them as virtues.

These self-appointed representatives of Allah compel people in the areas they controls, under the penalty of death, torture or mutilation, to convert to their specific variation of Islam, and live according to their interpretation of Sunni Islam and sharia law. They tolerate nothing except their exact belief and direct violence against Shia Muslims, indigenous Assyrian, Chaldean, Syriac and Armenian Christians, Yazidis, Druze, Shabaks and Mandeans in particular. All of this is well-known and public knowledge.

They have 30,000-50,000 fighters according to a recent estimate by Dr. Hisham al-Hashimi, an expert on the group. Many former Iraqi Army soldiers have been forced to join and others have been recruited from around the region and beyond.

Why would any sane rational human being, willingly rush off to become a would-be jihadists to fight in Syria and Iraq as one of these thugs?

The number of people killed during the Israeli-Palestinian conflict is quite frankly appalling and so the condemnation of the escalation of the violence is wholly appropriate. What is quite surprising within the Islamic community is the willingness of some to be wholly one-sided and condemn Israel without any condemnation for Hamas who are equally violent and aggressive.

However, what is even more surprising is that those within the Sunni Muslim community that willingly step forward to condemn Israel express a stunning silence when it comes to ISIS, especially in the context of the ISIS slaughter of vast numbers, many times the number of people tragically killed in the Israeli-Palestinian conflict.

What you will of course see is the following:

In other words, when you live within a belief bubble that refuses to actually condemn these thugs, then you are opening the door for those within this community to embrace the idea that ISIS are an Islamic ideal.

The actual reasons are as diverse as the number of individuals who rush off to do so, but we can perhaps identify a generic meta-reason.

People who join are trying to find a path, to answer a call to something, which would basically mean that they’re doing something that they believe is meaningful with their lives.

What they have is a very, very strong emotional and moral pull. They are driven by this passionate need to right some perceived wrong, to address some sort of injustice, to restore honor to those from whom it’s been taken.

ISIS is an Islamic wet dream in the eyes of potential recruits, this is fantasy made reality. It’s everything that a would-be jihadist could have hoped for, they have results. They’re capturing cities, they’re flaunting weaponry. They’re creating a safe haven, or refuge, where they can live.

As explained by John Horgan, a psychologist at UMass-Lowell who specializes in terrorism and who has interviewed members of a wide variety of terrorist groups, about IS’s appeal ..

The one thing that this movement has done far more effectively than any other terrorist movement is that they’re masters at packaging the fantasy deal. ISIS has a reality distortion field that only Steve Jobs would have dreamt of. In the past, in the other movements I’ve studied, like the IRA, would-be terrorists have had to work very hard, psychologically speaking, to justify to themselves, their families, and others the path that they’re on. ISIS has made that journey of navigating the self-doubt much, much easier. The only real obstacle is actually getting there, geographically, and that certainly doesn’t seem to be slowing people down at all.

… Looking at these selfies and YouTube videos, they offer an opportunity for people to take refuge in a group mentality, but also a chance for people to scowl back at their home countries and say, “Now I have the chance to speak my mind.”

Point 4 – Their on-line PR is slick and enticing

Once again the Internet is proving itself to be a disruptive force.

Al Hayat, ISIS’s media department, are both amateur psychologists and also marketers who churn out slick “Jihadi infomercials” that portray the “call of duty” to would-be foreign fighters … literally, because some of their videos rival scenes from the actual “Call of Duty” video-game. They are carefully composed, and craft a message about the supposed nobility and urgency of joining the fight, juxtaposed with pulse-pounding images and slo-mo video of adventure in battle. In other words, why stay in your room playing a video war game when you can star in the real thing?

They are tapping into the disillusionment of youth and offer excitement and meaning, so it is no surprise that they successfully draw in many.

Islam, in its pure embryonic fundamental form, is violent and grossly intolerant. The Quran contains rather a lot of verses that direct believers to behave like this, and if interpreted literally, will result is the rise of groups such as ISIS who will justify their actions using the Quran. They truly believe that they have the backing of a god to do what they do.

Now let’s be transparently clear about this, there are billions of Muslims on the planet, and a vast diversity of conflicting Islamic belief. Most of those individuals are not violent thugs, but rather are decent honourable individuals who wish to live in peace, and most of those variations are not promoting an ISIS like ideology.

The point is this, the elephant in the room, is the the foundation here is a set of beliefs that is not factually true at all, and so if the ISIS tree is to be toppled, then an axe needs to be put to this root. Bombing ISIS and bouncing bodies in the rubble is the traditional nation-state response, yet that does nothing except create a space for other willing martyrs to rush into.

There needs to be both a robust and vocal rejection of these irrational Islamic ideas, and also the promotion of better ideas to replace these morally bankrupt ideals, ones that will inspire and motivate humans to build a better world instead of rushing out to destroy it.

2 thoughts on “What motivates people to sign up for ISIS?”