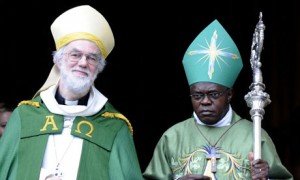 Apparently the C of E have decided to advertise!! The Guardian reports …

If you are looking for more responsibility and influence in your next job then an advertisement published by the Church of England this weekend may just catch your eye – for the post of Archbishop of Canterbury.

The church has for the first time decided to advertise for the job, following the decision last week of Dr Rowan Williams to step down.

The job spec, published in the Church Times and the Church of England newspaper under the heading ‘Vacancy in the See of Canterbury’, states that “submissions will be gratefully received”.

Could they really be doing this, could they possibly be insane enough to seriously consider any application? It is credible because of course they do hold some rather batty beliefs. Yes indeed, an entity that lives outside of space and time and created the entire universe just for us, gave birth to itself so that it could kill itself as a sacrifice to itself to appease it’s own anger towards us. Why? Well apparently because an ancestor of us all was tricked by a talking snake into eating some fruit. If you can indeed digest all that without laughing, then I guess the job is yours.

Then again, this might be an ideal role for an atheist…

So there you go then, get your applications in quickly … unless of course you carefully consider tomorrow’s date. Nah, it just can’t be that, that is just a coincidence.