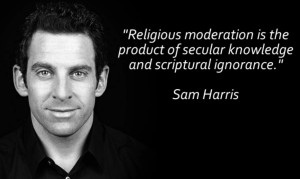 A genuinely nice chap who is a member of the Ahmadiyya Islamic sect recently wrote an article entitled “‘Talibani Atheism’ & how it fuels Islamophobia”.

For background context, the Ahmadiyya are a fringe Islamic sect that renounce all violence, which is of course praise worthy, and in fact they suffer a considerable degree of intolerance and discrimination at the hands of mainstream Islam and are not only branded as heretics, but there are also laws in Pakistan that specifically target them. What of course is all rather odd, is that they themselves also openly discriminate and express a considerable degree of hatred towards another group – namely the gay community, oh and they also appear to have a huge issue with Misogyney as well, so not quite as tolerant and forward thinking as they claim.

So anyway, the gentleman in question starts his article with definitions for words such as Bigotry and also discusses Islamophobia. He then make some good points and observes that Islam is indeed not just one blob …

Islam is not a monolithic faith. It has numerous sects and sub-sects that differ based on their understanding of the Quran. They also differ in their analysis and extent of reliance on recorded narrations – collected centuries later – of Prophet Muhammad, with one sect treating all such narrations as authentic, another disregarding them altogether and a whole spectrum in between. Given this diversity, the actions of a particular faction within Islam can only be representative of that group, not the whole religion.

As an aside, one fundamental flaw with the use of the term “Islamophobia” is that doing so falls into the trap of regarding Islam monolithically.

Oh and one rather odd claim in there is this one …

Of the sects within Islam, I belong to the Ahmadiyya Muslim Community. This is one of the largest communities of Muslims worldwide

… except that is not strictly true, in the context Islam, a belief that claims billions, a sect of ten million is a rather small number, and is most certainly not one of the largest.

What then follows is the usual belief PR about how wonderful his specific group is, and much if it is of course to be applauded, but it is all being done under the banner of beliefs that are not actually true – no Allah does not exist, no Mohammed was not a prophet, and nor was Mirza Ghulam Ahmad.

And then, there are those like Hirsi Ali and Sam Harris, who – like their Talibani counterparts – are extreme outliers in this diverse group. So, why do I call them Talibani atheists? And what sets them apart from other atheists?

So essentially he equates fact-based criticism of utterly irrational ideas with a gang of brutal thugs intent on murder – now that is quite frankly insane.

I can only wonder what comes next, perhaps the suggestion that criticism of irrational ideas is on par with the Nazis or racism … nah, he would never do that … oh wait, he did …

We know well what followed when Nazis demonized Judaism in Germany. We know what followed when the Black color was demonized in America. We know what follows when extremist zealots are allowed to promote their prejudices against Ahmadiyya Islam, Shia Islam, atheism etc. in places like Pakistan. We also know how Talibani atheists in the past, when empowered, went door to door hunting down theists in Russia. Let us not wait to witness such a dreadful outcome.

Another side observation, the fact that a gang of communist thugs happened to use the term “Militant Atheist” does not in any way imply that they were motivated by non-belief to murder, they are in fact far more closely aligned with the behaviour of fanatical religious beliefs. In their specific instance it happens to be a political one.

So in essence, what we have here is the suggestion that those who simply criticise irrational beliefs are on par with the Taliban, are racists, and are also Nazis.

So what is the truth here?

Both Sam Harris, and also Ayaan Hirsi Ali openly denounce bigotry, racism, and prejudice against Muslims or Arabs, and so their only real activity is that they openly criticise irrational beliefs and refuse to be gagged or silenced – that does not justify labelling that as either racist, Talibani, or Nazis … just rational.

Make no mistake here, the discrimination against the Admadiyya group is appalling, but that can never ever justify either their homophobia or misogyney, and nor does it justify attempts to shutdown valid fact-based criticism of ideas and beliefs that are simply not true and do not have a single jot of evidence to support them, by labelling such critics as Talibani or Nazis.

One other thought, the Ahmadiyya are themselves unfairly labelled “heretics” by 99% of the Muslim community and so suffer the consequences of such negative PR. In response to that they take great exception to such labels being unfairly applied to them, and yet here is a member of that same community applying a very similar type of rhetoric to others – now that strikes me as very odd.

I do also wonder, now that the Nazi analogy has been deployed, can I now invoke Godwins law?