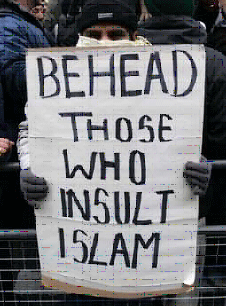 There is a rather popular myth that extreme views within Islam are the preserve of tiny fringe groups, and that the vast majority of Muslims do not hold such thoughts in their heads. This is sadly not factually correct.

Mainstream Islam has popularised some views that are quite extreme.

To verify this as factual I’ve listed below a couple of examples gleaned from some polls that have been recently conducted. Specific questions were answered and from these we can derive an understanding of how deeply some bad ideas have been embraced by rather a lot of people.

Ah but wait … before we get into such details, I need to place some emphases upon one very specific and rather important point : The vast majority of Muslims are decent honourable humans who strive to live decent lives and be at peace with all those around them, the fact that bad ideas are accepted as “truth” need not imply that those that embrace such thoughts will actually act on them.

OK, so let’s get into a few details then …

Do not misunderstand me here, clearly the vast majority do not participate in acts of terrorism or street riots, but opt to simply get on with their lives, and so while they might in theory accept such ideas, the good news is that most do not act upon them.

What is however clearly demonstrated by these impartial statistical facts is that the embrace of such Bad Ideas by mainstream Islam acts as an incubator that gives birth to intolerance, misogyny, homophobia, violence, murder, and so we have violent attacks almost every single day in the name of Islam, some big and some small, some Muslim on non-Muslim, others are Muslim on other variations of Islam. If you do not believe me, you can click here to verify this. Here are a few incidents for the past couple of days …

As I’ve already pointed out, the majority of Muslims are decent honourable human beings who strive to do what is right and live in peace with those around them. However, that is not because of their Islamic beliefs, but rather despite them. The problem here is not bad people, but rather the embrace of bad ideas that inspires many to behave in a truly repugnant manner. It is the bad ideology being embraced by a vast majority that motivates this constant flow of abhorrent behaviour from a small minority.

1 thought on “Islamic Myths: “The extremists are only a tiny minority” … what are the facts?”